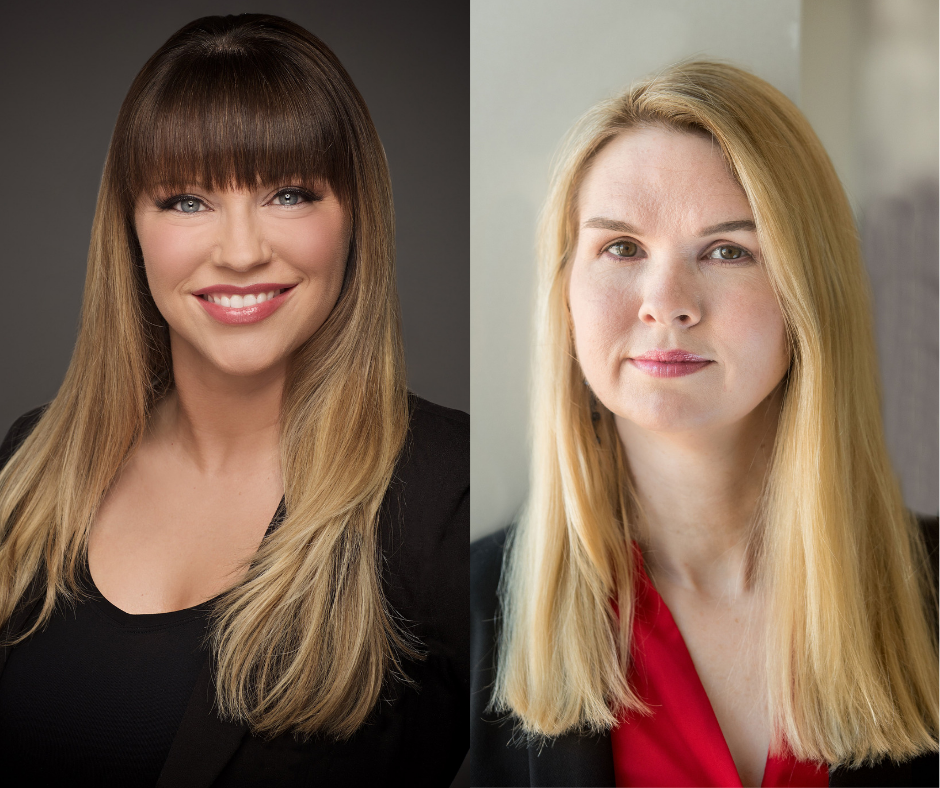 Brenda Tracy (left) and Jessica Luther (right). Tracy is an activist who speaks out against gendered violence in athletics and Luther is a journalist who covers sexual assault cases in athletics.

Brenda Tracy (left) and Jessica Luther (right). Tracy is an activist who speaks out against gendered violence in athletics and Luther is a journalist who covers sexual assault cases in athletics.

The National Collegiate Athletic Association (NCAA) doesn’t have a policy prohibiting athletes who commit sexual violence from playing. Experts and activists say the problem lies in the NCAA’s lack of clear-cut rules regarding sexual misconduct.

Editor’s note: If you or someone you know has been sexually assaulted at FAU, look at the UP’s resource guide to see what emotional, medical and reporting options are available on and off campus.

Brenda Tracy accused four men, two of them being Oregon State football players, of gang raping her in 1998, but later dropped the charges because she wouldn’t testify in court.

Oregon State’s football coach, Mike Riley, wrote his players’ offenses off as a “bad choice,” and suspended them for one game.

Sixteen years later, in 2014, Tracy came out with her story and spoke to Riley. What she found was that he cared about her, and he cared about making a change.

Set The Expectation touches on topics like victim blaming, manhood, mental health, and consent. Tracy also has coaches pledge to attach eligibility to behavior. This means that if a player commits sexual violence, they can no longer be on the team.

“Right now in the NCAA, you can be found guilty in a court of law of sexual assault, and you can still play ball, but if you smoke weed you can be kicked off the team for a year,” Tracy said. “These are things that I am advocating against. Winning is not that important to put the safety of other students at risk. I think it’s a privilege to play sports, not a right. And if you violate a privilege you shouldn’t be able to play anymore.”

The NCAA doesn’t have a policy that disqualifies a player who commits sexual assault, sexual battery, or rape from playing on the team. What they do have is a recently-adopted policy that requires teams to go through yearly sexual assault prevention education, based on materials from the NCAA.

FAU’s Student-Athlete Handbook says that under Title IX, discrimination on the basis of sex is prohibited, and any student who commits an act of domestic or sexual violence, harassment and stalking “may be subject to student conduct/disciplinary action.”

However, being subject to student conduct or disciplinary action doesn’t necessarily mean a student who commits sexual violence can’t play on a team anymore.

Jessica Luther, an investigative journalist based in Austin, Texas covers sexual misconduct in athletics, and says the way to stop it is to have clear-cut rules for players who commit sexual violence.

“I often think schools need to have really clear policies within athletics departments, same for fraternities and other groups who are isolated and powerful. There has to be a consistency and they have to be transparent on all of these rules,” Luther said.

Luther says she only applied to Florida State University because she wanted to attend their football games.

She was a huge college football fan as a teenager, but now Luther says she finds it hard to enjoy watching. After covering a story where FSU star quarterback Jameis Winston was accused of sexual assault, Luther had a new view of college athletics: teams put winning over the safety of students.

Luther went on to cover more sexual violence cases in athletics, including a high-profile cover up at Baylor University, and even wrote a book about it, called Unsportsmanlike Conduct: College Football and the Politics of Rape. In her book, she writes about several sexual assault cases in athletics, and solutions that could’ve prevented them from happening.

“The system as it’s set up encourages people to make bad, exploitative decisions. They make bad decisions around issues of gendered violence. It’s about winning and keeping these guys on the field,” Luther said.

Luther started to see a pattern of sexual violence in football teams while reporting on the Baylor University rape coverup. A player was standing trial for a 2013 rape, but faced no disciplinary action from the university. Luther wanted to do something that showed these assaults aren’t isolated issues, so she wrote her book.

She says football coaches and administrators argue: “It’s only this one guy, it has nothing to do with the team.”

“I wanted to think large about it. I wanted to speak systematically about it. We aren’t going to change it if we think about them as one-off issues,” Luther said.

Her book Unsportsmanlike Conduct addresses these scandals, and reports that college football administrations help sweep sexual assaults under the rug.

The case Luther broke at Baylor, which received national attention, resulted in the firing of head coach Art Briles because of his response to the assault. Local media didn’t get word of the players actions for two years before Luther and her reporting partner stepped in.

Tracy’s case didn’t reach the media until years later as well, and once it did, she launched herself into activism at Set The Expectation.

“If women alone could stop sexual violence, we would’ve already done it. To me, the answer is involving men. It’s about 10 percent of the male population committing these crimes. Most of the men in that other 90 percent are silent and complacent. For us, it’s engaging the 90 percent of men. I try to show these men how to use their platform to make a difference in their community,” Tracy said, referencing a 2015 study by a group of sexual assault researchers published in medical journal, JAMA Pediatrics.

Tracy sat on a board the NCAA created, called the Commission to Combat Sexual Violence. This is the board that helped get the NCAA to adopt their sexual violence policy that requires coaches and players to attend educational events, but she advocated for an entirely different set of standards. Before the current policy passed, Tracy petitioned for the NCAA to adopt a separate policy that bans violent players. She says the current policy is a step in the right direction, but doesn’t have any real consequences.

“That policy I think is good and bad. The NCAA is requiring schools to do yearly sexual violence prevention. That’s good and that’s important, but it also doesn’t have any teeth to it. If you don’t do it, the only repercussion is you can’t hold a championship game,” Tracy said.

If she could write a policy for the NCAA to adopt, she says it would look like the Big Sky Conference’s “Serious Misconduct Rule.” It bans students with violent convictions from playing or receiving athletic scholarships at schools in their conference.

Big Sky, which includes teams in the western U.S., is the first in the NCAA to have such a policy. Tracy says the NCAA needs to follow in Big Sky’s footsteps and make a policy that prohibits violent players and recruits who have been violent in the past from playing.

“The NCAA is an organization that can take a stand but refuses to do so. I think the fact that there’s a tolerance for that isn’t okay. I think the NCAA should step up and do something about it. It’s not okay to actively and knowingly recruit a violent player to the campus,” Tracy said.

Tracy was vocal when FAU head football coach Lane Kiffin brought Kendal Briles, son of fired Baylor head coach Art Briles, to FAU as an offensive coordinator in December 2016. Kendal was named in the lawsuit — filed by the Baylor student who was raped — for allegedly using women to entice recruits to join the team.

“Do you like white women? Because we have a lot of them at Baylor and they love football players,” Kendal was quoted as saying in the lawsuit, according to the Palm Beach Post.

While Kiffin was Tennessee’s head coach in 2009, the football program also used “hostesses” to escort top prospects around Knoxville, according to a book called “The System: The Glory And Scandal of Big-Time College Football” by journalists Jeff Benedict and Armen Keteyian. The duo wrote that the hostesses were integral in securing players.

“Coaches have a tendency with using women to recruit players, and Lane Kiffin is one of the bright examples of that,” Luther said. “What are you saying about access to women if you’re using that as a reward for joining the team?”

The UP hasn’t received any claims of FAU using hostesses, but we asked anyway. We reached out to FAU Athletics spokesperson Katrina McCormack to ask whether Kiffin uses hostesses at FAU to vet potential recruits, and in McCormack’s response to the UP, she did not answer that particular question.

FAU also has a track record of attracting players under Kiffin with alleged histories of violence.

Tracy said she meets coaches all the time who understand that violence against women in athletics is a problem, but not all coaches have the same attitude.

“Charlie Strong at USF, he gets it. He has a zero tolerance policy, but then you have another coach who is willing to take these athletes in like Lane Kiffin. For some coaches … it’s the way it’s always been to give kids second chances, but what are they doing to make sure no one gets hurt again?” Tracy said.

The UP asked McCormack what programs they’ve set in place to prevent sexual violence.

“FAU is committed to creating a healthy campus environment and has instituted programs and policies on campus that educate students on issues related to the prevention of sexual misconduct,” McCormack said. “All incoming first year, transfer, second bachelors and graduate students are required to complete an online education program related to alcohol, drugs and sexual misconduct. Additionally, all FAU student-athletes participate in sexual assault prevention training provided by the FAU Athletic Department.”

But Tracy says that if schools were committed to keeping students safe, they would have consequences that tie their ability to play to their actions.

She said, “These men need to know that their actions matter.” 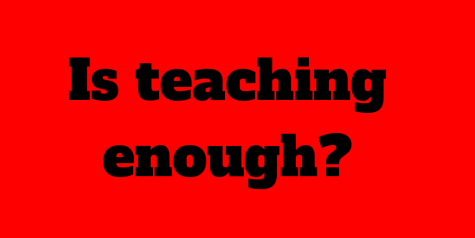 Tracy argues that the NCAA’s efforts to prevent sexual violence fall short. She says they can practice sexual assault prevention by making it punishable, but instead they settle for teaching atheletes.

The university’s president or chancellor, director of athletics, and Title IX coordinator must support that:

The policy also says athletics departments should review the NCAA Sexual Violence Tool Kit to use as a guide for sexual violence prevention education. The tool kit includes a series of checklists to make sure athletic departments are adhering to the policy. The NCAA wants  student-athletes using “leadership training” so they can use “their roles in creating and maintaining a culture free from sexual violence.”

If the school doesn’t do this, they can’t hold a championship game. 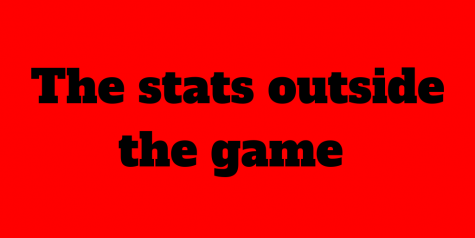 Even though sexual misconduct goes “severely under-reported,” research says any type of man can commit sexual violence, but athletes are at the top of that list.

Outside The Lines, a show on ESPN, requested Title IX records from the Power 5, five conferences that host the biggest programs in the NCAA, and.. 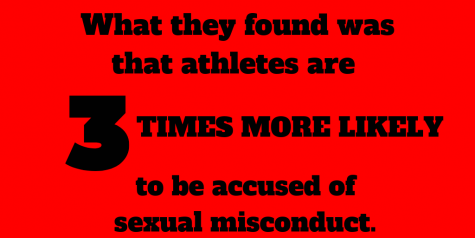 Luther said, “I get really nervous about the statistics surrounding this stuff. Everything is so under-reported.” There are varying accounts from different researchers of how many athletes are accused of and commit sexual misconduct, but most concur that it’s more than the average non-athlete student. 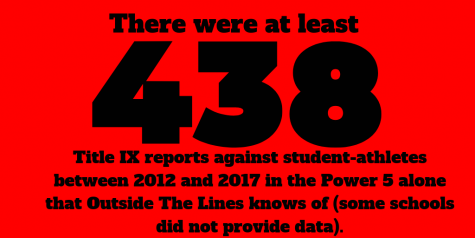 Cameren Boatner is the editor-in-chief of the University Press. For information regarding this or other stories, email her at [email protected]