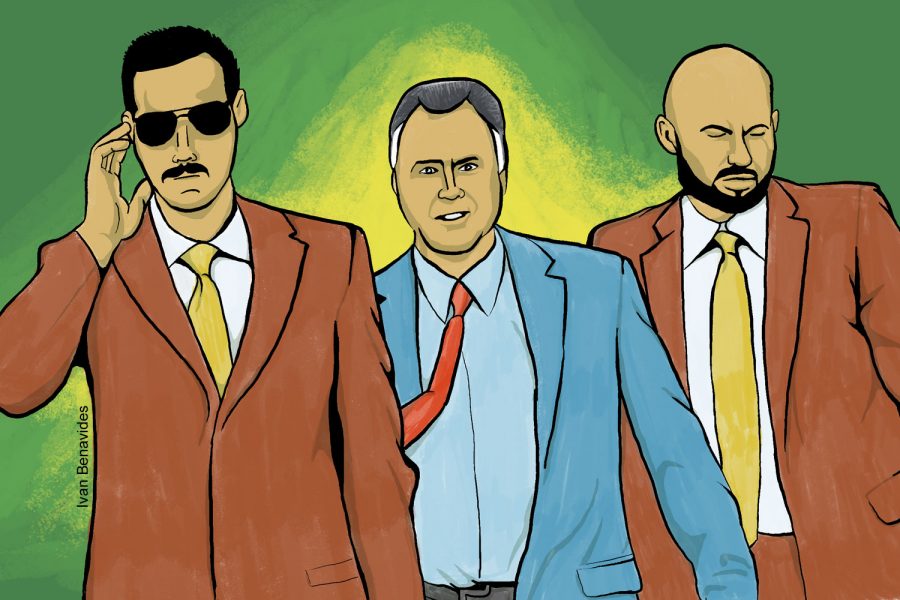 Commentary: I doubt James Tracy will get his job back

What I learned covering the federal lawsuit the former professor brought against FAU.

I’ll be surprised if James Tracy wins this.

Following his firing in January 2016, Tracy filed a federal lawsuit against the university to get his job back, along with an undisclosed amount of back pay.

Tracy, a tenured former communications professor, brought national attention to FAU after writing on his personal blog that the Sandy Hook shooting and other mass casualty events were staged by the U.S. government and covered up by mainstream media.

He claims FAU attempted to restrict his right to free speech, while the university maintains it fired Tracy for not filling out required paperwork.

When both sides met in court for the first time Nov. 29, 2017, it quickly became clear this would be a long, drawn out process. With eight court days down and only a few to go, the jury must soon decide if Tracy was wrongfully fired.

After spending 17 hours in the courtroom over two consecutive days, here’s what I know.

Judging by the jury…

I have a hard time believing the jurors will be able to remain impartial when they make their decision.

Ultimately, I think the jury will be swayed by FAU for two reasons: Tracy’s controversial theories and his legal team’s conduct.

Before his firing, he asked the parents of a 6-year-old Sandy Hook shooting victim to provide his birth and death certificate as proof the shooting actually took place.

On the first day of the trial, the judge had to remind potential jurors multiple times that they may be offended by Tracy’s views, but to remain fair during the process, the Sun Sentinel reported.

It was clear during the two days I attended that Tracy’s legal team was more aggressive, a little less prepared, and at times needed to be warned by the judge for side comments and speaking over others.

I watched as his team received objection after objection from FAU’s side for creating hypothetical scenarios and not sticking to the facts of the case.

During one of the objections, I glanced at the jury and watched as a male juror rolled his eyes.

FAU says Tracy wasn’t the only one fired

Early on in the fourth day, Tracy took the stand. FAU’s defense attorney G. Joseph Curley questioned Tracy on whether he received funds for his blog, titled MemoryHoleBlog. All FAU faculty have to report any outside activities, paid or voluntary, which FAU says Tracy failed to properly carry out.

The university stood behind a defense that around the same time Tracy lost his job, another Arts and Letters instructor was fired for failing to properly report an outside activity.

Chary-Sy Copeland was registered as an instructor of Spanish and foreign languages, without tenure, before her firing in fall 2015.

FAU former vice provost Diane Alperin, who was responsible for firings at the time, testified that Copeland failed to report working at other universities as an instructor.

Curley said the university requires the reports “to assure professors are fully committed to teaching,” according to the Palm Beach Post.

“Weren’t you taking in money for research?” Curley asked.

Tracy responded: “I believe I explained this a number of times, I only accepted funding from the blog to fund the blog, not for research.”

Curley then pointed out that the blog included a section saying, “donate for memory hole research,” which Tracy called an independent research fund.

Tracy fights for his right to free speech

According to FAU’s defense, Tracy published on his blog an open letter to FAU from a Canadian filmmaker who supported his theories.

Tracy had signed an agreement with FAU, stating he would use a university-approved disclaimer saying his opinions were not affiliated with the school. The agreement also read that he would leave FAU out of his blog.

The lawsuit states that university policies are not built on a state, federal, or constitutional law.

As a private citizen, Tracy is entitled to his First Amendment rights. Yet FAU maintains his blog violated the agreement by mentioning the university, a restriction Tracy claims is “unconstitutionally vague.”

He later made amendments to the disclaimer, according to the lawsuit.

Curley questioned Tracy again, saying he wasn’t supposed to include FAU on his blog, to which he replied: “It’s my constitutional rights to free speech.”

At this point I took a look around the room. It seemed like the jury was engaged, though there were still horrific wet cough sounds coming from a sick juror. The judge stopped to ask if she was OK a few times and made light of the situation, asking her to drink tea with ginger during the afternoon break.

Alperin said she stood by the university’s decision to terminate Tracy due to their claim he was noncompliant in filing the proper paperwork to report his outside activities — something he had done in previous years, while serving as faculty union president.

One of Tracy’s attorneys Matthew Benzion replied: “No, you just fired him.”

In 2013, former College of Arts and Letters dean Heather Coltman took handwritten minutes at a meeting on the public backlash about Tracy.

In the context of “considering his First Amendment rights,” Coltman wrote that FAU needed to find “winning metaphors,” according to the lawsuit. The minutes also indicate that there should be “no email on this,” the lawsuit states.

Following Tracy’s firing at the beginning of 2016, an FAU dean circulated an email that read “for the record, Tracy was not fired because he didn’t report things,” the lawsuit said.

The fourth day of the trial had left jurors sick and tired.

Coughing and sneezing were heard all day in the courtroom. One of the jurors wore a disposable surgical mask, while the other seven tried to keep their distance from her.

Was his life in danger before his job was?

On day five, you’d think there would finally be some answers. But like yesterday, there only seemed to be more confusion.

Tracy’s lawyers questioned Coltman, who along with Alperin, suggested that pressure from media and the public grew larger following the 2013 winter break. She said that emails and other messages to FAU grew in both quantity and intensity.

Violent messages were circulating on and off campus, as well as in the Arts and Letters college, Alperin and Coltman both testified before the jury.

Alperin said at the time, she was surprised by Tracy’s lack of reaction to all the backlash both he and the school were receiving.

“If I had received so many of those emails, I would’ve been concerned,” she said.

Covering up the crazy?

As someone who has dealt with FAU attempting to stifle my college newspaper on multiple occasions over the years, I highly doubt his blog had nothing to do with their decision to fire him.

Case in point: His speech was referred to as a “black eye on all faculty,” according to the lawsuit.

Alperin said, “It was disturbing not only the functioning, but the reputation of the university.”

Coltman also testified that FAU administration was advised by a chief press officer to not email any faculty member about the case.

I believe FAU knew early on they would be subpoenaed for their emails in an attempt to find proof that Tracy was fired over his blog.

Tracy’s legal team seemed to use a very passionate and aggressive line of questioning to make Alperin slip up and admit Tracy’s belief that he was fired over negative publicity for the school, not for “insubordination” as FAU claims.

Alperin did say that in the beginning of 2013, the university was facing an immense amount of media coverage, which she admitted was “not very positive.”

She added that donors were pulling funding, incoming applicant rates were declining, and the community, students, and alumni were pressuring the university to take action.

In between a break from the trial, a man wearing a white T-shirt with the words “Conspiracy Theorist” printed on the front chatted and laughed with Tracy.

The man even asked me if I was there in support of Tracy, to which I replied: “No, I’m on assignment for the school paper.”

From classroom to court

Former students of Tracy’s believe he changed during his time at FAU.

“He came across as a little harsh, and a little conspiratorial, but not full-blown crazy,” FAU alumnus Brandon Ballenger said.

He added that a lot of what he taught in class made sense and was “backed up and there were some genuinely interesting discussions.”

As a professor, he was known to challenge how students think.

“We had lots of disagreements … in front of classes because he repeated a lot of conspiracy theories about journalists and I, as someone who had just taken a full-time job at the local alt-weekly, didn’t share his opinion,” he said.

Tracy was also known to be impatient, stubborn, and argumentative with those who didn’t agree with his point of view.

“He seemed annoyed to be teaching graduate students that would question his positions and statements,” Desjarlais said. “[He] started becoming very critical of local paper and local journalists to the point where we would have long verbal arguments about it.”

Between FAU’s mysterious “winning metaphors” and an email from a dean saying “Tracy was not fired because he didn’t report things,” I have reason to believe Tracy’s blog spurred FAU to fire him.

It’s not that Tracy was bad at his job, but it is possible that he slipped too far into his own conspiracy theories.

No juror will look past the family of the 6-year-old Sandy Hook shooting victim claiming Tracy harassed them for proof of his existence.

Both sides have rested their cases as of Friday. According to the Palm Beach Post, the jury will begin making their decision Monday.