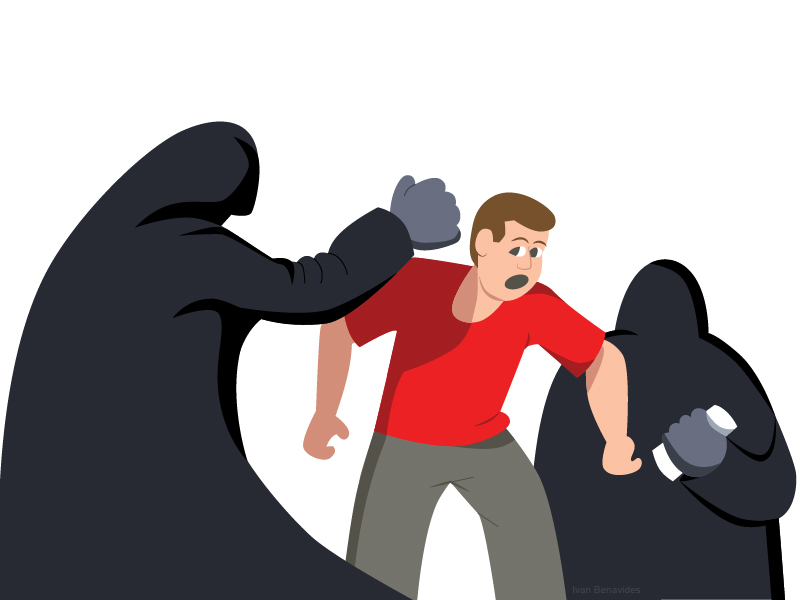 Last weekend, three iPhones were stolen in separate robberies, but all from the same address. Illustration by Ivan Benavides

Students question their safety in nearby housing complex after consecutive robberies

Within 24 hours, three attacks resulted in three stolen iPhones — all at one address.

Kevin Liyanage was in his apartment when he woke up in the middle of the night. The senior marketing and fashion retail major at Lynn University didn’t think much of it.

“I was in bed at the time,” Liyanage said. “I heard people screaming and assumed it was just a party,” something he said is a regular occurrence at University View student housing, where he resides.

But instead of a party like he thought, Liyanage awoke to the sounds of a crime scene.

Last weekend between Saturday, May 14 and Sunday, May 15, three consecutive robberies took place, all at University View.

The student housing — located about a mile away from Florida Atlantic’s Boca Raton campus — is affiliated with University Park housing, where a student was shot and killed earlier this year.

The complex is privately owned by the Preiss property management company and caters to students who attend colleges, including FAU, Lynn University and Palm Beach State College.

“This is a gated community where you are meant to feel safe … apparently not,” Liyanage said.

After multiple attempts to reach representatives of the complex via phone, the University Press visited the complex for comment, only to get turned away.

Saturday at 12:32 a.m. a minor was attacked and robbed. According to the Boca Raton Police Department report, a group of five men used their hands, feet, fists and teeth and took the minor’s iPhone 6.

Less than an hour later, at 1:12 a.m. another individual was also robbed by a group — this time comprised of three people. The group took the victim’s iPhone 6 Plus and according to the Sun Sentinel, the individual offered to buy it back for $500 and was robbed of his wallet as well.

Finally, on Sunday at 1:40 a.m. three individuals, all 18 years old, were also robbed in the same manner by a group of between five and seven men. According to the police report, an iPhone 5C was taken.

Boca Raton police spokesperson Mark Economou told the Sun Sentinel that police are looking to see if the incidents are related.

All victims and witnesses contacted by the UP declined to comment as of publication time.

One tenant, Kevin Kuusk, was on his way home around 2 a.m. on Sunday when he saw police in the community.

“There were four cops out front when I pulled in the neighborhood,” the FAU senior accounting major said. “I drove past and the cops told me ‘be careful, some kids got robbed.’”

Kuusk said over the weekend there were two back-to-back parties, which isn’t uncommon, according to the residents the UP spoke with.

“We used to throw parties,” he continued. “There was one incident some months back where a guy got jumped.”

The Sun Sentinel reported that all three victims were leaving parties when they were robbed.

What to do if it happens to you

The UP reached out to the FAU Police Department for advice on what to do if a student is facing a robbery situation:

“Everybody needs to be careful and cautious at all times,” Captain Larry Ervin of the FAU PD said. From there, Ervin referenced a pamphlet students can obtain from police headquarters. The pamphlet states that during a robbery, you should “remain calm and cooperate, do not jeopardize your safety and that of others, do not attempt to apprehend suspect.” It continues: “be observant and prepared to describe the suspect, record description immediately and to call 911.”

Kuusk’s roommate, junior ocean engineering major Ryan Crawford, was not home at the time of the incidents, but in his time at University View, he said he has not been satisfied with the complex’s security.

“This place isn’t secure,” he said. “People who don’t live here can get inside by easily bending the side gate.”

Crawford told the UP that when parties happen within the complex, attendees tend to park across the street at a Jehovah’s Witnesses place of worship and sneak in past a vacant security tower or through a broken side gate.

“There is never security in the building, they mainly use it for storage,” said Crawford. “The apartment complex doesn’t care about the people living here, they only care about UPark.”

“I feel safe in my apartment, not in the neighborhood per se,” Crawford said.

Officers are asking anyone with information on the crimes to report to Crime Stoppers, or to call detective Lazarus Kimsal at 561-620-6144.

Joe Pye is a staff writer with the University Press. For information regarding this or other stories, email [email protected] or tweet him @jpeg3189.