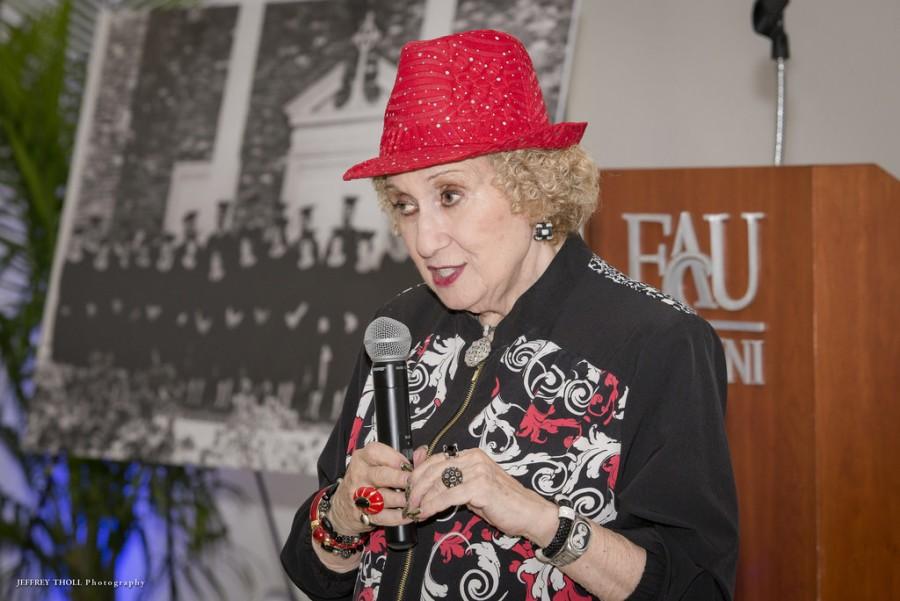 Editor’s note: A months-long investigation by the University Press has revealed the appearance of unethical behavior between donor Marleen Forkas, her friend Patricia Breman and chief of staff Stacy Volnick. The Harold and Marleen Forkas Alumni Center sits on the north end of the Boca Raton campus, across from the Recreation and Fitness Center. Forkas has donated a significant amount to this university. A source very close to her suggests that Forkas used the idea of donating more money down the line to influence Volnick to hire a close friend of hers. The following details Forkas’ involvement in getting her close friend Breman hired and the conflict that Breman carries into her job each day.

What if the president of the United States was hand picked by the biggest donor to the government, rather than through an election process? It would be weird, wouldn’t it? Not at Florida Atlantic University.

According to an anonymous source very close to the situation, Marleen Forkas — who has donated over $1 million to the university — was involved in the selection of Patricia Breman as the interim assistant vice president for alumni affairs.

Breman, a good friend of Forkas, earns $125,000 per year in her new position according to emails obtained by the University Press.

She previously worked at Florida Atlantic as the assistant vice president of alumni relations from July 1997 to March 2011. Both her relationship with Forkas and prior experience made Breman a quick choice to replace Bradford Crews, who resigned last summer.

Breman brings a conflict of interest to her job because her son’s company — one that she works for — could potentially benefit from her position.

Volnick knows that her selection ruffled some feathers. The thinking among some alumni and donors is that she brought back Breman this summer at the behest of Forkas.

“Charles Schmidt donated all that money for the complex. Imagine if he told Pat Chun who the next football coach should be because he could donate more money down the line,” said the anonymous source, who is both an alum and a donor.

Schmidt’s foundation gave $16 million to the school in December 2014 to establish the Schmidt Family Complex for Academic and Athletic Excellence. Chun is the school’s athletic director.

“It seems that the rumors are that Marleen Forkas had some type of involvement in this decision, and that is simply not true.”

The source of those rumors?

“I believe that there’s someone disgruntled because they weren’t considered,” she said, adding that no one outside of Breman was considered to fill the interim position. “I think it’s pretty sad that we’re trying to bolster a strong area of the university like advancement and someone wants to undermine that.”

Volnick sent an email to eight people on June 30 announcing the official addition of Breman to the staff. Outside of Breman herself, Forkas is the only person in that email chain who is not an FAU employee.

The alumni center on the Boca Raton campus is named for Marleen Forkas and her late husband Harold. According to Volnick, Forkas received the email because the building is named after her. “Just like we would have for anyone else,” she said.

Harold Forkas made a fortune during his ownership of eight Midas Muffler franchises; Marleen Forkas spent several decades in the fashion industry. The two made a $1.1 million donation to the university in 2005 to establish the alumni center. Once Harold Forkas died in 2009, he passed on the family fortune to his wife.

The anonymous source said, “She was brazenly telling people that she was the one who had Breman brought in.”

Forkas requested a University Press reporter provide two references before she spoke. After he did, she did not respond to any further requests for comment.

After retiring from the FAU Foundation in 2011, Breman began working in her son’s consulting company, Accelerate Exceed, which has had prior contracts with the university.

Acccording to its website, Pine Jog Environmental Education Center, located in West Palm Beach, is part of the FAU College of Education.

When asked if she thought that was a conflict of interest, Volnick said no. “To my knowledge, that work was completed before in June. She started in August or something like that.”

The company completed its work with the Pine Jog Environmental Education Center in May.

The nature of Breman’s job puts her in front of people  and businesses with substantial wealth — businesses to which she could tout her son’s consulting company, whether or not it’s working for the university.

“I did fundraising, I raised the four and a quarter million dollars for the alumni center,” Breman said. “My job [now] is the engagement of alumni.”

The anonymous source said, “Her family’s business can benefit from her position now. It’s a clear conflict of interest.”

The FAU alumni board might have been able to recognize the appearance of such a conflict, but it was not consulted. Ben Dickinson, chair of the Florida Atlantic University Alumni Association Board through June of this year, confirmed as much.

He explained that the board is advisory in nature and doesn’t actually have the power to veto or affirm any decision either way.

“If they wanted to bring in Donald Trump, we couldn’t stop that,” he said. He also mentioned that he didn’t know Breman had a son whose business was tied to the university.

The notion that a donor could try to involve themselves in university fundraising affairs isn’t a new concept to Andrew Watt, president and chief executive officer of the Association of Fundraising Professionals. He explained that there is a clear line of delineation.

“It’s quite acceptable for a donor to sit on a board, be involved in setting the strategic direction of an organization and assume responsibility for its fiscal health,” he said.

“Stepping beyond that to influence a hiring decision, particularly for a position funded by the donor, represents a real conflict of interest. It potentially allows the donor to place an individual connected to them within the organization which, in turn, provides them influence and access to managerial and executive decision making.”

Breman secured more than $1 million in university gifts from Forkas during her first stint working with FAU. The two are close and have been for some time.

“I know that Pat [Breman] and Marleen had a very good relationship,” said Dickinson.

Breman says she never approached the school about coming in on an interim basis.

There is no job search to fill her position as of yet. First, the school must select a new long-term vice president for advancement — right now, Volnick is filling for the interim. Breman answers to her.

“The search firm should be identified in the next couple weeks,” Volnick said in November. “That firm will canvas the nation to find a new VP of Advancement, who can choose to keep Breman or find someone to replace her.”

“She’s absolutely a stop-gap,” said Dickinson of Breman. “I would say she happens to be a good one because she has done the job before.” He added: “She’s not looking to be working another 15 years.”

Breman confirmed her interim status. “We were very clear about that when I took the job.”

She still works in advancement as the executive director of development at Nova Southeastern University. Peirce acknowledged that sometimes donors want to overstep their bounds.

What if a donor tries to use the notion of donating more money to get what they want? “I usually advise the institution not to accept the gift,” said Peirce.

In her current position as interim vice president of advancement, Volnick deals with what she called “fundraising and friendraising.”

Fundraising deals with collecting funding, and friendraising is the process of developing relationships with people who can donate funds.

According to the anonymous source, Volnick’s lack of experience there might have played into why she handled Forkas like she did.

“She’s never been a fundraiser,” said the source on Volnick. “She was in catering and food service before she got promoted. She has no background in fundraising.”

However, Breman does have an extensive fundraising background. She wouldn’t speak on whether the notion of getting more money from Forkas could be a reason why she was brought back.

Given the chance, she did not mention her history with Forkas specifically.

“I solicited funds for all of the people who donated funds to the alumni center. As you can imagine, there were a lot,” Breman said.

Her friend Forkas has considerable wealth, which makes her a possible asset to a university that puts a premium on donor dollars.

“She was kept around because of the prospect of more money,” said the unnamed source. “She’s got sway, influence, power. It needs to stop.”

Wesley Wright is the business manager of the University Press and one of its senior reporters. He can be reached at [email protected] or on Twitter.