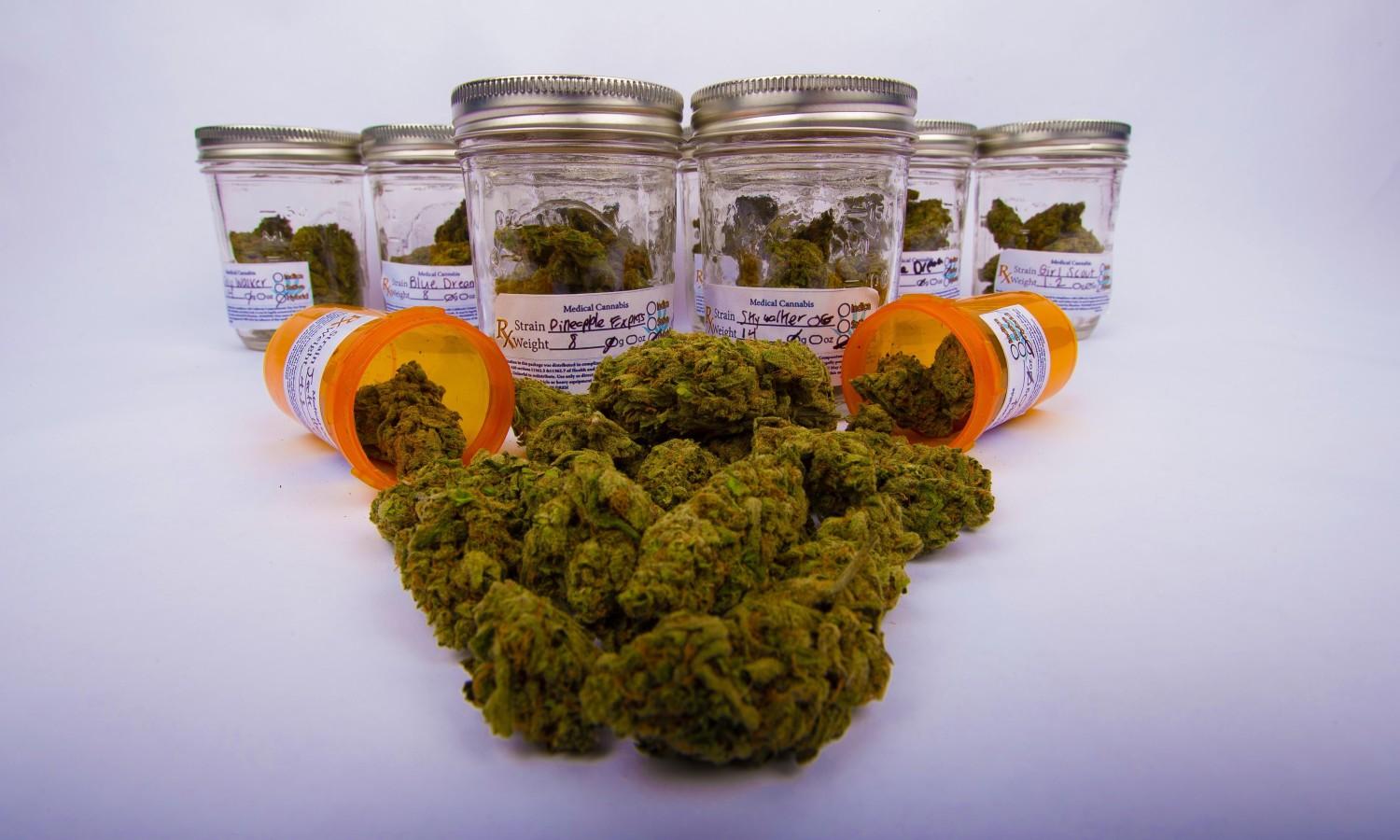 An FAU alum is using his business degree to open a school that cultivates medical marijuana.

Sheridan Rafer wants to teach you how to grow marijuana — but not today.

Rafer, an alumnus of the FAU College of Business, is opening Palm Beach County’s first medical marijuana school, the Institute of Medical Cannabis.

“We wanted to give patients and their caregivers the knowledge and the skills to have the access to the highest quality and the most affordable medicine” Rafer said.

Registration is currently open and classes begin the first week of June.   Rafer is one of two instructors and he has over ten years of experience in the medical marijuana industry, including growing and breeding cannabis.  He has attended and completed many courses, seminars and lectures in medical marijuana states.  The other instructor, John Gatti Jr., has a master’s degree in plant pathology and over 30 years of experience working with greenhouse production of plants for laboratory, greenhouse and field research.

Together, they will offer four courses (see sidebar), each costing around $400, with a primary focus on cultivation.  Students will have the opportunity to receive hands-on training in fully-operational indoor grow rooms. 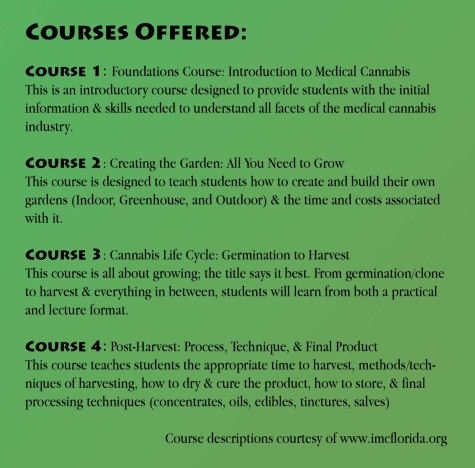 “Cultivating cannabis is still illegal in the state of Florida and what we’re doing is teaching people about the medical cannabis industry while showing them how to grow herbs and legal vegetables,” Rafer said.

Right now, only legal herbs and vegetables will be grown at IMC, and Rafer, a health conscious personal trainer, emphasizes that everything will be grown organically and GMO free.

The students can take home the vegetables and herbs that they grow.  It’s still unknown if they will be able to keep weed, even if it becomes legal.

Completion of the courses offered at IMC does not give students the legal certification to grow, it simply gives them the skills to cultivate plants properly.  If and when medical marijuana becomes legalized in Florida in November, people would have to obtain a license through the state.

Rafer’s good friend and brother-in-law both battle multiple sclerosis — an inflammatory disease which attacks the nervous system.  That was his motive behind opening IMC.

“The people who suffer from diseases or certain medical conditions can have a choice to have an alternative to prescription medications that are sometimes not effective or cause more side effects than they actually cure,” Rafer said.

Medicinal cannabis has been effective in many cases across the United States, including six year-old Charlotte Fiji.  Fiji’s story was covered in a documentary called “WEED” by CNN’s chief medical correspondent, Dr. Sanjay Gupta.  Like many people, including Fiji’s own parents, Gupta was adamantly against marijuana and doubted the medical benefits it could offer. 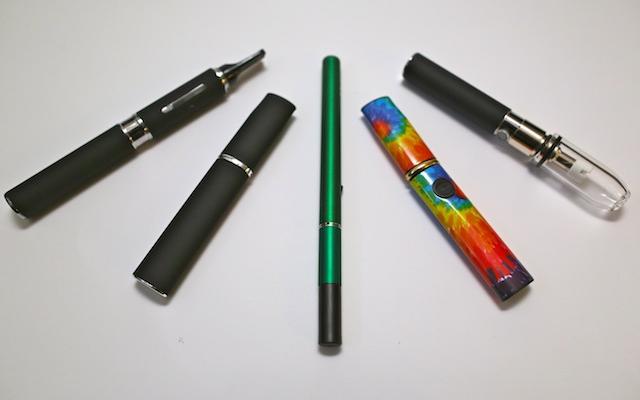 Gallery|5 Photos
Vaporization: A vaporizer, “vape” for short, is used to heat up the marijuana buds to the point where their active chemicals are released. Because it does not combust the plant matter and doesn’t produce smoke, many believe this is a healthier way of ingestion. [Photo courtesy of High Times]

Fiji suffered for nearly her entire young life from Dravet syndrome, a rare form of epilepsy unable to be controlled by medication, which caused her to have about 300 violent seizures per week.  Before the diagnosis, doctors put her on several medications (including ketamine, a horse tranquilizer), however, Fiji’s condition progressively got worse, leading to her cognitive and developmental regression.  She had already suffered incredible brain damage and had been close to death many times.

After a long process, her parents began to treat her with a specific strain of medical cannabis which produced immediate results in treating her epilepsy, reducing her seizures to about two or three times per month (these usually occurred while she was sleeping).  This particular strain is known as “Charlotte’s Web” and is being used to treat many others who suffer from epilepsy and related diseases due to its low THC and high CBD levels (the amount of THC in this strain does not produce the euphoric “high” feeling and the higher levels of CBD provides a natural medication).

While Fiji’s parents are amazed by the results that medical cannabis have provided for their daughter, they are unsure of why doctors and researchers in the medical field didn’t discover this sooner. “Prohibition has set research back about 100 years, and it’s just unfortunate,” said Rafer.

The Charlotte’s Web bill, nicknamed after the strain, is being voted on by politicians.  It will allow the particular strain to be legalized for medical purposes only.  On Nov. 4 of this year,  Floridians will be able to vote on Amendment 2 to allow the use of medical marijuana for other debilitating diseases and conditions, not relieved by the particular Charlotte’s Web strain. These include AIDS, cancer, glaucoma, multiple sclerosis, dystonia and many other ailments.

Rafer volunteers for United for Care, the organization that has brought Amendment 2, medical marijuana, to the ballot in November.  “I feel like [patients] should have a choice to use medical cannabis and that choice should be made between the patient and the doctor and not by the politicians,” he said. 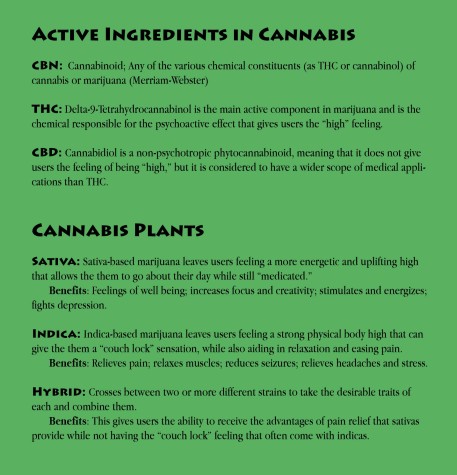 While Rafer believes cannabis alleviates many physical issues, he understands the economic benefits it has, as well.  “Besides helping the patients, the tax revenue that is generated for the states and for county is unbelievable.  [The revenue that could be put towards] funding schools and improving construction.”

As for IMC, Rafer hopes that the curriculum and facilities provided by the Institute of Medical Cannabis will offer information to those who are seriously interested in proper cultivation.

“For over 10 years it’s been a dream of mine to do something on this level and, now that I’ve put in the time and put in the experience, it’s starting to become a little bit of a dream come true.”

[Max Jackson contributed to the reporting of this story.]

Kiki Baxter is the Web Photo Editor of the University Press. She can be reached at [email protected] or @kiki_baxter on Twitter.