Krolo, a sophomore majoring in pre-business and player for FAU’s men’s tennis team, recalls how life’s unexpected paths led him into playing tennis and ultimately becoming a champion on the court despite the obstacles he faced. 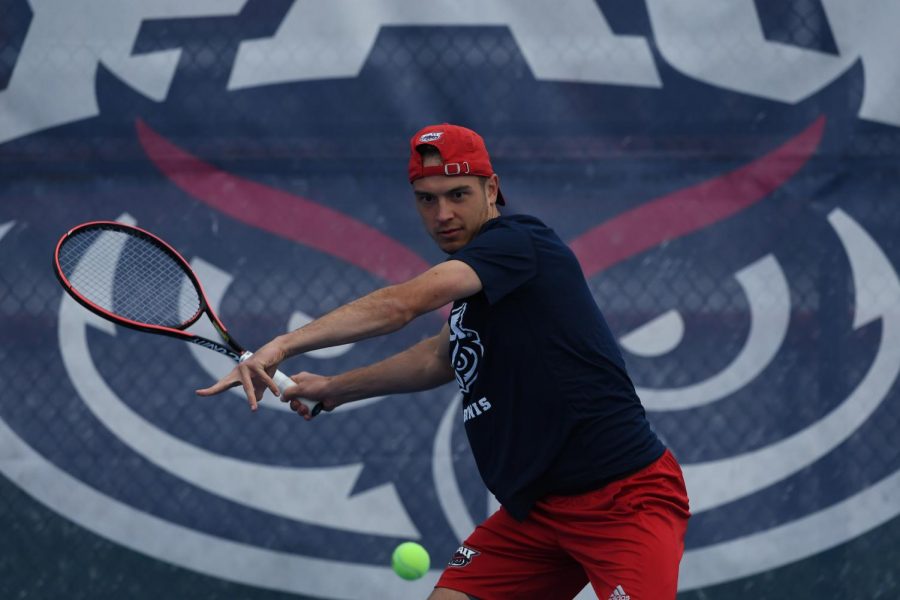 Life takes us on different paths, and Filip Krolo knows this from first-hand experience.

Krolo, a sophomore majoring in pre-business and player for FAU’s men’s tennis team, recalls how life’s unexpected paths led him into playing tennis and ultimately becoming a champion on the court.

At the age of four, Krolo started playing soccer as his first sport. It wasn’t until he turned five or six that he began to play tennis and ended up playing both sports.

Eventually, he decided to focus on tennis because he felt that it suited him more in comparison to soccer.

“In soccer, you’re like playing in a team, and you have to do what the coach tells you. In the court you’re alone, you make your own decisions. If you win, you really beat the opponent and in soccer like maybe the clock saves you. I like to know that I beat [the opponent] with my own abilities,” Krolo said.

Growing up, Krolo said his inspiration was always his parents. He said he is very thankful for everything they do for him.

Krolo faced many obstacles during his second freshman season. He sprained his ankle at the beginning of the semester and  Two weeks later, he tested positive for COVID-19. Three weeks after testing positive, he had inflammation on his shoulder.

Being injured made things difficult for Krolo, but he played in the team’s last eight matches despite the inflammation on his shoulder. Due to this injury, Krolo said he was unable to hit a forehand during the matches.

According to MasterClass.com, a forehand in tennis “is a type of groundstroke where the racket’s swing path goes across the player’s body with an open palm. The dominant hand maintains the forehand grip.”

“It was pretty hard to win any matches because of [my injury]. I couldn’t really practice with the team. I spent most of the time in the training room doing recovery and rehabilitation for the injuries. Still during the matches, I gave my best to help the team [get] the job done,” he said.

During his spare time off the court, Krolo said he likes hanging out with his friends, watching and playing soccer, visiting different kinds of restaurants, and playing chess.

Krolo’s biggest motivation when playing on the court is to prove that he is capable of winning a tournament.

“I like winning, like the feeling, especially for the team in college… It’s such a nice feeling when everyone relies on you, and you get the final point, and you decide the match. That feeling it gives you, I don’t know how I could compare it to any other situation. So, these are the moments I played for myself,” Krolo said.

Krolo said tennis is his whole life as he dedicated the last 12 years of his life to the game while giving his best to improve every day to become a better player.

“Outside the court, I experienced so much through tennis, I met so many people, traveled to so many countries, and saw so much of the world. Tennis is my passion and I love playing it, so it definitely has a big part in becoming the person I am today,” Krolo said.

Throughout Krolo’s time with the university’s team, he has won numerous awards including a Second Team All-Conference USA doubles despite the injuries he battled, was one of six players league-wide to be honored with the C-USA All-Academic Team having a 4.0 GPA off the court, led the Owls with six spring singles wins, and more.

Krolo has not only demonstrated how talented he is on the tennis court, but how supportive he is with his team.

Hunter Robbins, Krolo’s teammate, said Krolo is like a brother to him.

“He’s a great player on the court who continues to work hard day in and day out. He’s one of my best friends and always brings the best out of all of us,” Robbins said.

In the future, Krolo said he would love to be able to pursue his all-time dream of becoming a professional tennis player, but he is not pressuring himself into anything.

He said that in tennis, anything can happen like injuries. If tennis does not work out, his backup plan would be getting a job in the finance field.

For this upcoming season with the team, Krolo said he hopes that the team can fulfill their goal of being a top 30 program in the nation. In addition, he hopes that he and his teammates are in good shape and do not get any injuries.

“I believe in us, we have good chances and if we perform well, we can do good things for FAU,” Krolo said.

Katherine Ambrosio Villegas is a staff writer for the University Press. For more information regarding this or other stories, email [email protected].