C-USA Media Day shines a light on the state of FAU Football going into the 2021 season. 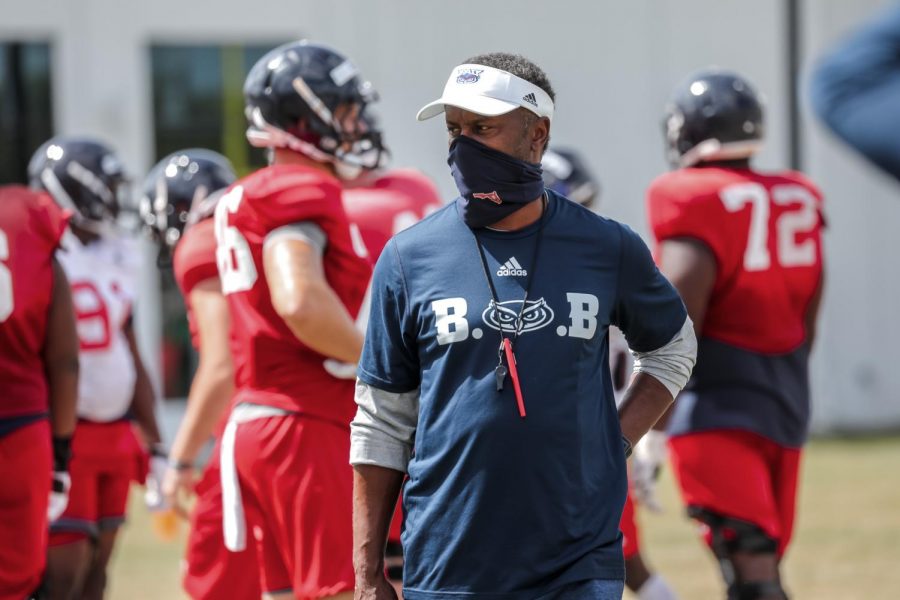 The FAU Owls football program will begin their 20th season in 43 days. With that, it signals the rejuvenation of a team eager to return to a sense of normalcy amid a COVID-19 plagued season last year.

Head coach Willie Taggart, along with senior offensive lineman Desmond Noel and senior defensive back Zyon Gilbert, spoke to the media at C-USA’s Media Day Wednesday afternoon and gave exciting updates on the state of the team.

“I have a better understanding of this football team going into this season. The guys have had a wonderful offseason with no issues. They’re working really hard and I’ve seen a lot of gains in the weight room from a strength and speed standpoint,” Taggart said.

At the end of last season, Taggart attributed some of the team’s struggles to a lack of chemistry and practice time. The restrictions placed upon the team last season prevented many players from getting much needed practice time to hone their skills and get stronger.

After last season’s disappointing finish, where they lost their last three games of the season, Taggart believes the addition of spring practice this offseason and a boost in team camaraderie has provided the greatest improvement for the team.

“Last year was tough because we weren’t around each other enough and from a football standpoint, our guys didn’t get it until the season began,” Taggart said. “So for spring ball, we wanted to learn [from] our players and for them to learn [from] us and know what they can do good or what they can’t do.”

Taggart also stressed that his players have the choice whether or not they want to take the COVID-19 vaccine, but wants them to make an informed decision.

“I think it’s so important that we educate them on these things… You try to answer their doubts and make them think about those things and not just doing something because somebody else said it or they saw it somewhere else but they make the decision because they’re educated on it and making the best decision from that standpoint,” Taggart said.

Noel echoed Taggart’s earlier comments and preached that spring football was required for the team to see substantial improvement.

“Like coach said, just being around each other and us having spring ball was a big plus for us. It was a way for us to come together, see what we have, and focus on the small details as opposed to COVID where we didn’t really have the opportunity to do so,” Noel said.

“It is kind of difficult to learn from a different defensive coordinator every year, just learning a new system every year but I’d have to say a big takeaway I get is learning what each coach brings to the table… each coach brings something different and I just try to take just a little bit from each different coach,” Gilbert said.

The team has had minimal changes to the roster this offseason and after a hot start last season without a traditional offseason, the coaches and players are optimistic about this upcoming season and what’s in store for them.

FAU will kick off its 2021 football season Sept. 4 against the University of Florida.