“I would love to stay here, preferably playing soccer, I'm working on it now. I'm looking for different opportunities to become a pro. That's my goal number one,” Ivan Mykhailenko said. 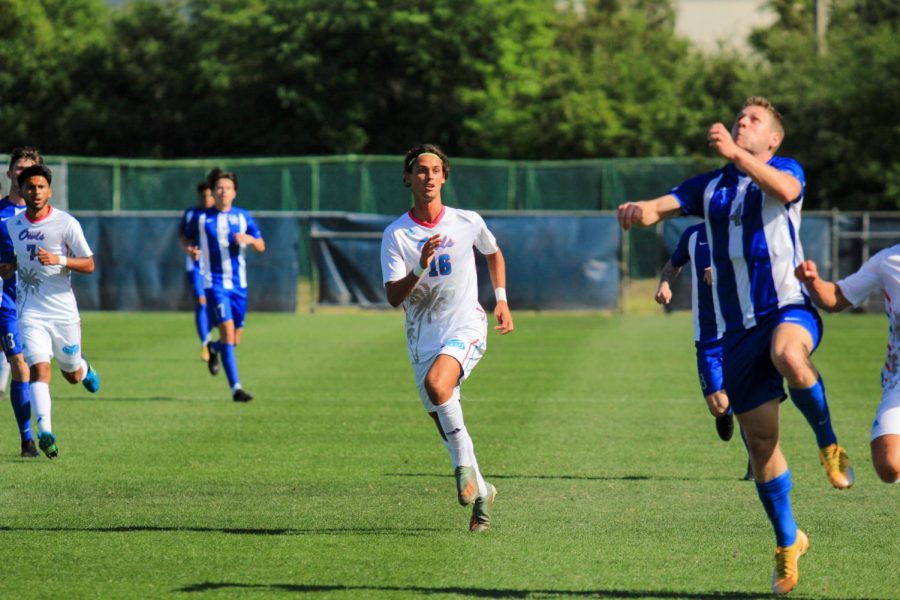 To be a great striker, you must have an eye for scoring goals at all times. Ivan Mykhailenko is that striker.

Mykhailenko began playing soccer in 2007 at the age of eight when he was living in Cyprus with his father, Dmytro, who was entering his twilight years of a 19-year soccer career that included 23 appearances with the Ukrainian national team. For Mykhailenko, currently an FAU soccer player, his dad was the main reason he started playing the sport.

“He was playing in Cyprus, and the environment and everything there was perfect to start playing because the fields were amazing,” Mykhailenko said. “The weather was beautiful and that was the place where I joined my first team.”

Initially, Mykhailenko wasn’t passionate about soccer because he saw it as an activity to do besides school. It was not until he returned to his hometown in Kyiv, Ukraine to attend the FC Dynamo Kiev Academy in 2009 that he realized his love for the sport.

“Anything that I was starting made me want to win and be competitive, but not the game of soccer,” Mykhailenko said. “We came back to Ukraine and I went to the best academy in town. That’s where I actually loved the sport.”

While Mykhailenko said he never tried to be like his dad when it came to soccer, he sees him as an important influence as his main coach and evaluator.

“It doesn’t matter who was coaching me; my main coach and evaluator was my dad,” Mykhailenko said. “Obviously I admired all of his achievements, all of his career and everything that he did and it was just fun and amazing to watch.”

When he transferred from Alfred Nobel University to FAU in 2019, Mykhailenko said that it was at a time where he was without a team in Ukraine. A scout who represented an agency from Eastern Europe presented him the opportunity to play in the U.S. so he could combine education with sports.

“The main factor that intrigued me was the opportunity of combining education with sports because at home, it was hard. We just don’t have such a thing that’s playing for the school; you play for the private academy, play for the private team, and you study separately in a different institution,” Mykhailenko said. “I was running late in classes, I was missing classes, [and] I was always taking my exams separately from all the groups. It was just difficult to combine these two aspects.”

Mykhailenko said he integrated into the team very well as his time with FAU has been unique. Even though he felt like a freshman experience-wise, it was his junior year academically because he managed to transfer the two years of credits he had from Alfred Nobel University.

“The whole concept of being a student-athlete was different,” Mykhailenko said. “Probably the first semester was the hardest one, I went through different stages. Through the stage of being a little homesick, through the stage of being super excited and super overwhelmed with everything that’s going on, traveling, starting, [and] being in a foreign country speaking a different language.”

After completing two seasons with FAU, Mykhailenko has made a name for himself. He was placed on the All-C-USA Second Team after scoring seven goals in 16 games in 2019. He  built off that by winning All-C-USA First Team and the co-Golden Boot award after scoring six goals in 10 games in the spring of 2021.

Entering his final season with FAU in the fall, Mykhailenko wishes to end his collegiate career with a bang. He was proud of how the team performed in the spring as he believes they’re capable of doing more, especially after achieving the program’s first winning season since 2007 and making history on the defensive end with goals allowed per game.

“We set a standard for ourselves and we reached the standard so that was good, but all of us feel that we’re capable of doing more,” Mykhailenko said. “[Next season’s] going to start very soon, so everyone is very excited to get the best season that we ever had.”

After graduating from FAU, Mykhailenko wants to stay in the U.S. so he can pursue a professional soccer career.

“I would love to stay here, preferably playing soccer, I’m working on it now. I’m looking for different opportunities to become a pro. That’s my goal number one,” Mykhailenko said.