Camarero, a senior majoring in economics and midfielder for FAU’s men’s soccer team, recalls how being in a country where soccer is considered the most popular sport influenced him. 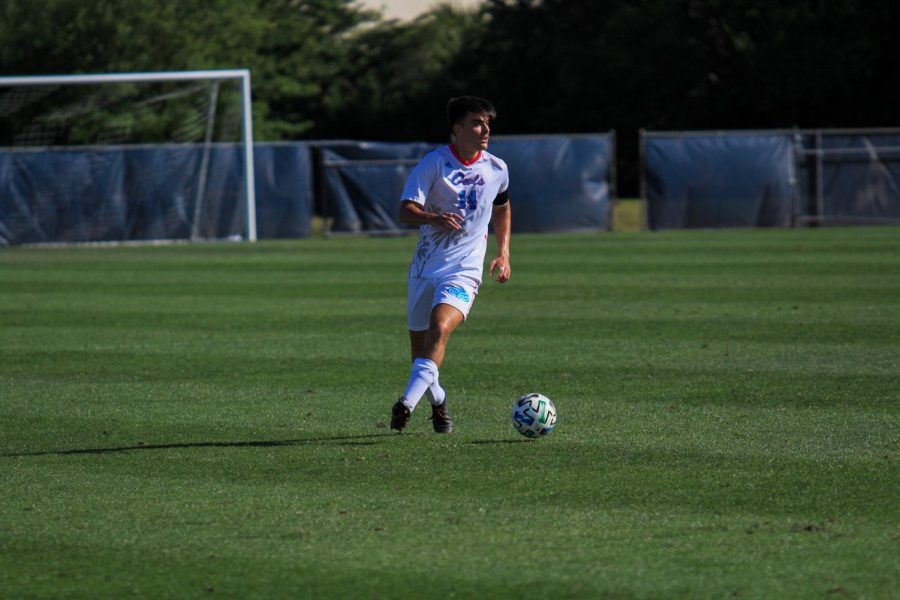 When born in a country where all you hear, watch, and play is soccer, it ultimately becomes a part of you. Alonso Coello Camarero, born in Madrid, Spain, knows this from experience.

Camarero, a senior majoring in economics and midfielder for FAU’s men’s soccer team, recalls how being in a country where soccer is considered the most popular sport influenced him.

“When you’re a kid, all your friends play soccer, or you go to a park with your friends, you go anywhere and you start playing soccer,” Camarero said. “My family, they watched a lot of soccer, so I was watching soccer games with them on TV… the school, the breaks, break time, you play soccer. That is all you do.”

At the age of five, Camarero began playing soccer. What started off as a hobby for Camarero in Spain ultimately turned into a professional career.

“At the beginning, it was just for fun for me to play with my friends, but as I kept playing and moving forward in level, and I moved to another team Atletico Madrid…I started taking it more seriously,” Camarero said.

Atletico Madrid is a very popular soccer team in Madrid. According to the International Champions Cup, “Atlético are the third most successful club in Spanish soccer in terms of titles, having won LaLiga on ten occasions, as many Copa del Reys, three UEFA Europa Leagues and two Supercopas de España.

In addition to playing for Atletico Madrid, Camarero has played for Rayo Vallecano de Madrid and Chattanooga Red Wolves SC.

During his spare time off the field, Camarero said he studies a lot, likes going to the pool, beach, going for walks, listening to music, and spending time with his friends.

Growing up, Camarero stated that his inspiration has been both his parents.

“They are really hard working people, they’re really responsible, and they’ve tried to make me learn all the values and the core values from our family and our culture,” said Camarero.

In 2018, Camarero joined FAU and became a part of the men’s soccer team.

What convinced Camarero to attend the university and become a part of the team was the opportunity FAU was giving him to play pro-level and get a degree at the same time.

Camarero said that his time with the team since he joined in 2018 has been great and he is really happy.

He said it was very easy for him to adapt to this change. His teammates helped him a lot and made it easy for him to enjoy his time at the university from the beginning.

Camarero said that he built great friendships with many of his teammates during his freshman year because they were in the dorms and went to class together.

However, soccer-wise, his first year was hard because he says the team did not have a great year.

When on the field, Camarero said his biggest motivation is to just play to enjoy.

“If you don’t enjoy what you are doing, if you don’t enjoy playing, there is no way that you are going to be able to perform,” Camarero said. “I want to be able to leave a mark in this school, I want to try to help the team get to where we want to get in the conference, and even nationally. Personally, I’m trying to do as good as I can, so I can get as much exposure as I can and reach my ultimate goal of being able to do this for a living.”

Throughout the 2018 season, Camarero led the team with four assists on the season and made C-USA All-Conference Third Team and All-Freshman Team to name a few of his many achievements throughout the season.

In 2019, Camarero became FAU’s first player to earn Conference USA First Team honors since FAU joined the league in 2013. He said that this achievement made him feel really proud and happy.

In addition, he also earned Conference USA’s Academic Honor Roll for the 2019 season and 2020.

In 2021, he was one of the 19 named to the C-USA Commissioner’s Honor Roll, had a shot against Stetson in the 1-0 win, earned Conference USA Men’s Soccer All-Conference Second Team, etc.

Throughout Camarero’s time with FAU’S men’s soccer team, he has not only demonstrated how talented he is on the field, but how he constantly motivates his teammates.

Diego Orduna, Camarero’s teammate, said that Camarero is a good person on and off the pitch.

“He’s a guy that I can really trust in different ways and also is a guy that always wants more and more and he also motivates people to do their best,” Orduna said. “He’s never satisfied with what he has, he’s always pushing forward to be better at the field. And something I really admire about him is his dedication in school and in soccer.”

Mateo Pieschacon, a former teammate of Camarero, said that Camarero is the best teammate and friend someone could have.

“He has never failed me in any way and encouraged me on and off the field 24/7 to be a better person and athlete,” Pieschacon said.

Regarding the future, Camarero said in 10 years from now, he sees himself as hopefully still playing soccer. However, being able to play pro-level for 10 years in soccer is not easy, he says.

Camarero is currently studying economics and says that if things don’t work out, he would like to work in a company as a counselor, an advisor, or even a professor.

For the Fall 2021 season, Camarero says he is going to give it his all.

“I’m going to try and have the best season that I’ve had so far, I’m always trying to improve, always trying to get better on the field, and help the team as much as they can. I am going to try and help this team get to the conference tournament and why not win it. Hopefully, I can establish myself as one of the best players in the nation, make the All-Conference First Team. This is my last season, so I’m just going to try and obviously enjoy it. I’m pretty sure I’m gonna do good, I have been working a lot,” he said.

Katherine Ambrosio Villegas is a staff writer for the University Press. For more information regarding this or other stories, email [email protected].