Students and university staff discuss Juneteenth’s recognition as a federal holiday, the contrast of the prohibition of critical race theory, and what can be done now. 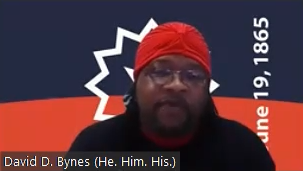 The Center for Inclusion, Diversity Education, and Advocacy (IDEAs) hosted a panel discussion on June 18 to address Juneteenth, a holiday commemorating the freeing of enslaved Black people on June 19, 1865.

On June 17, Joe Biden signed a bill turning Juneteenth into a federal holiday. This new bill comes a week after the Florida Board of Education banned the teaching of critical race theory in public schools.

At the June 10 Board of Education meeting, Gov. Ron DeSantis said, “We have to do history that is factual, and if you look at things that have grown out of critical race theory it’s much more about trying to craft narratives about history that are not grounded in fact.”

Britannica defines critical race theory as an intellectual movement that recognizes race as a social construct used to oppress and exploit people of color and that U.S. legal institutions are inherently racist “as they function to create and maintain social, economic, and political inequalities between whites and nonwhites, especially African Americans.”

David Bynes from the Center for IDEAs and host of the panel told the UP, “I think that people who are on the sanitized version of history are going to love [the new holiday]… I think it’s oxymoronic in a way, and I don’t know that it does anything to advance us as a country.”

Bynes explained that the bills are contradictory because there is now a federal holiday that Florida teachers aren’t able to teach students about.

“We got this federal legislation that calls for us to commemorate Juneteenth as a federal holiday and I definitely want us to be happy to some extent,” said panelist Brian Knowles, manager of the Palm Beach County School District’s Office for African, African American, Latino, Holocaust, and Gender Studies. “But, at the same time, we’re looking at state and local legislation that wants to mute and sanitize history.”

Bynes said that despite the recognition of Juneteenth as a federal holiday, voting rights are being restricted, reparations haven’t been paid, and there’s a lack of police reform.

The theme of the panel was “America on Fire,” and that’s a fire that panelist Dax Boatwright Ph.D., Transcript Evaluation Coordinator at FAU, said can be put out.

“First and foremost, you need to recognize the disenfranchisement that was experienced by descendants of American slavery. Number two, you need to apologize, truly say you’re sorry, and recognize you’re wrong. And number three, give me my money, that’s what reparations are,” said Boatwright. “And number four, you need to continue to invest in the Black community.”

Boatwright highlighted the importance of not exploiting Black athletic and intellectual talent but investing in them.

Panelist Keven Allen, director of the First Generation Student Success program, explained that America has a responsibility to all Americans, regardless of race, gender, or sexual orientation, and that responsibility is ensuring that all Americans have the same access to life, liberty, and the pursuit of happiness.

Laguerre said that while the fire in America could be put out and change could be made, it won’t, because the policymakers don’t want to.

“Last year you had all of these senators and congresspeople ‘protesting,’ kneeling and showing that they stand in solidarity but they never wanted to make any real change,” Laguerre said.

She pointed to how much their ancestors fought for change and how much change has occurred since last summer’s Black Lives Matter protests.

“Things may not come when you want them, but when it’s needed, it’s going to be right on time. I believe that is what’s supposed to happen, even if it’s not in our lifetime. We have to be those change agents now for our children,” Hoods said.

Allen said that it’s important to avoid an “us versus them” mentality and to reach across the aisle, find allies.

“Sometimes we can get into a theory where white people are bad and black people are this, and it becomes an ‘us versus them’ situation and I think that not only finding allies but also educating to the fact that what we’re dealing with is a human issue,” Allen said. “We need to elevate this beyond just ‘this is a black issue.’ That’s ‘us versus them,’ and this is not. This includes all of us.”

Bynes concluded the panel with words of encouragement. “Do something awesome this weekend to enjoy this Juneteenth, whether it’s continuing and moving this conversation forward, whether it’s getting with family… whatever it is, do something meaningful and do the work,” he said.

Gillian Manning is the Editor-in-Chief for the University Press. For information regarding this or other stories, tweet her @gillianmanning_ or email [email protected]