FAU Baseball: Owls win three out of four against FIU at home

The Owls scored 25 runs compared to the Panthers’ 17 runs. 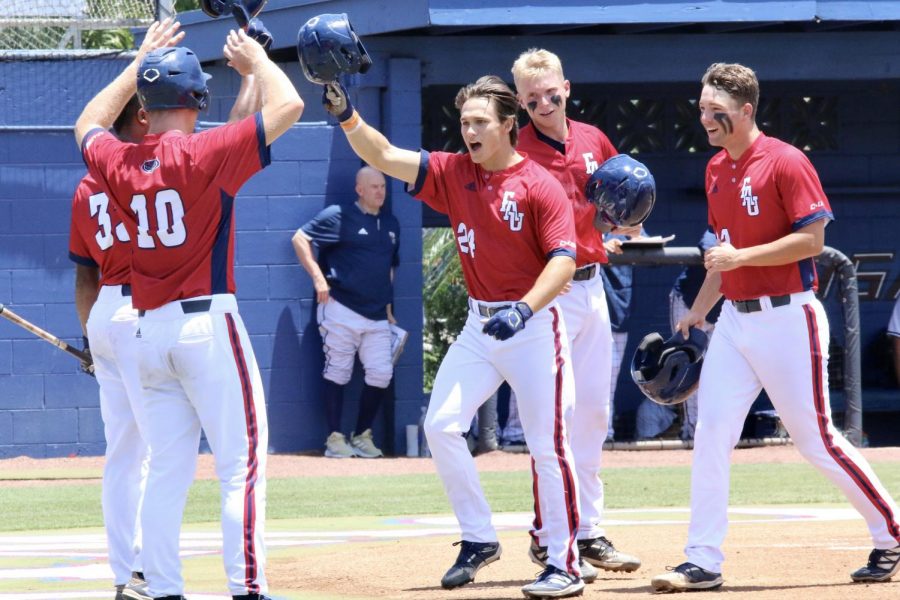 Mitchell Hartigan celebrates with teammates after hitting a grand slam against FIU in Game 1 on May 1, 2021. Photo courtesy of Noah Goldberg.

Here’s the University Press game-by-game recap of the series.

FAU opened the series with its offensive integrity intact, taking down FIU 12-2.

The Owls opened up the scoring in the first inning with freshman catcher Caleb Pendleton hitting a single to left field, driving sophomore infielder BJ Murray to home plate.

After a scoreless second inning, the Panthers got their first run in the third thanks to freshman first baseman Adrian Figueroa hitting a double to right field to get home redshirt freshman catcher Ben Rozenblum.

FAU scored two runs in the third and fourth innings; the first having Bobby Morgensen sacrifice a groundout that drove home freshman infielder Nolan Schanuel, and the second involving Schanuel getting a walk with bases loaded.

Due to outpouring rain, the game was delayed to Saturday at 1 p.m. as it resumed at the top of the sixth.

FAU ignited an explosive seven-run performance in the sixth. It started with Schanuel hitting an RBI single to center field, driving Murray home. Sophomore outfielder Mitchell Hartigan then hit a grand slam to right field, earning his fifth home run of the season. Murray topped it off with a double RBI to left field, making the score 10-1 when the scoring outburst ended.

The Panthers got their last run of the game in the seventh with a home run to left field from freshman shortstop Steven Ondina, which was his first this season.

FAU scored two more runs thanks to Pendleton hitting a home run to left field and Steven Loden getting an RBI single that also went to left field, marking a dominant performance by the FAU offense.

With the Panthers unable to come back from the 12-2 deficit, the mercy rule was enacted after the seventh, giving the Owls an early win.

While the resumption of game one of the weekend had the Owls’ bats come alive, it was dead in game two as the Panthers beat FAU 6-1 Saturday afternoon.

The only form of offense came from Murray, who hit a no-doubt home run into left field in the first inning, giving the Owls the lead. Murray continues his solid season as that was his 11th home run of the season. He also hit a double in the eighth inning.

The math adds to two hits for Murray, which was FAU’s only hits of the game.

FIU starting pitcher Garrett Rukes pitched a complete game against the Owls as he pitched all nine innings, striking out 10 batters, allowing two hits, one run, and issued a walk. He threw 121 pitches and besides the aforementioned Murray, he was unhittable.

“We couldn’t get anything going,” FAU head coach John McCormack said. “I thought Rukes was really good, he did a great job of pitching. It was fun to watch, even though I didn’t like it in terms of us getting stuffed.”

FAU started Matt Sparling, who was actually in a pitcher’s duel with Rukes until he was taken out in the sixth inning. In those five innings pitched, he allowed three hits and a walk but allowed zero runs while striking out three.

Junior Dylan O’Connell relieved Sparling and after he conceded two base hits, the Owls went with junior Mike Entenza to get out of the jam. What resulted was a three-run home run from FIU outfielder Justin Farmer.

FIU didn’t score again until the top of the ninth inning when FAU tried to keep the deficit to just two runs. Sophomore Brock Helverson relieved Entenza in the ninth, but gave up three more runs to the Panthers to make it a 6-1 game.

In their final three outs to put a rally together, Rukes had a 1-2-3 inning pitching a complete game.

After the game, McCormack talked about the poor hitting performance from the Owls Saturday.

“The thing that we did is that we expected the breaking ball to be early [from Rukes],” McCormack said. “We were right, but guys just couldn’t get the barrel on the ball. He did a good job at keeping it in the top of the zone that looks enticing.”

FAU survived an overtime thriller as Jackson Wenstrom hit a sac fly to get the game-winning RBI to beat FIU 9-8.

The Panthers wasted no time to fire up their offense, scoring four runs in the first inning. Due to a rough pitching performance by FAU’s sophomore pitcher Jackson Spiller, FIU hit two doubles, one single, and earned a walk due to Spiller throwing a wild pitch.

FAU immediately responded, only needing two hits to score six runs. Three walks by Morgensen, Hartigan, and senior infielder Wilfredo Alvarez, two RBIs thanks to Loden hitting a single to right field, and an unearned run by Loden due to a passed ball.

Hartigan continued his solid start in the second, hitting a single to left field to complete the 7-0 run for the Owls.

Spiller checked out after the first due to discomfort in his right arm. Redshirt junior Brycen Allen came on the mound as Spiller finished with 38 thrown pitches but allowed five hits.

The Panthers kept being a nuisance to FAU as Farmer perfectly executed a two-run home run to right field, assuring everyone this game wasn’t ending soon. The game tied with a double to center field by freshman shortstop Dante Girardi as he drove Ondina to home plate.

Allen subbed out after pitching 1.1 innings, allowing Drumheller to enter the game. Allen came off after throwing 25 pitches and getting two foul outs and two groundouts.

Rozenblum added another run for the Panthers to retake the lead thanks to a wild pitch by Drumheller.

FAU refused to let FIU gain distance on them as Schanuel got to home plate, tying the game once again.

The game went down to the wire in the final inning. The Panthers had the perfect opportunity to take the lead with bases loaded, but a spectacular double play by the Owls prevented that from happening. Unfortunately, FAU got shut out as extra innings followed.

The Owls only needed one run to win the game, and Wenstrom did just that in the ninth. He hit a sac fly to center field to drive home Loden, who celebrated with teammates from the dugout right after taking down the Panthers.

“[Wenstrom] was able to slow himself down, compartmentalize, and say ‘that stuff’s over, there’s nothing I can do about it. Now I’m going to do something here,’” McCormack said.’

The Owls concluded the series with a defensive masterclass, taking down the Panthers 3-1.

FIU got on the scoreboard first thanks to redshirt sophomore outfielder Alec Sanchez hitting a home run to right field, earning his fourth this season.

The Owls responded in the third inning thanks to Schanuel getting an RBI via a walk, driving home Wenstrom as a result.

FAU took the lead in the bottom of the fourth with two RBI singles by Wenstrom and Murray, giving themselves the 3-1 advantage over FIU.

Despite their attempts to get back in the game, the Panthers couldn’t get past FAU’s sophomore pitcher Javi Rivera, who was lights out for the entire game as he threw 119 pitches, struck out eight batters, and got seven groundouts and five foul outs.

“Except for last weekend against [FIU], his pitching [in the conference] has been really good,” McCormack said regarding Rivera’s performance. “He’s really turned it up in conference play and I’m happy for him.”

Rest will be heavily needed for the Owls before they head out to Bowling Green, Ky. for their last road series of the season, taking on the Western Kentucky Hilltoppers.

“We still got some work to do and we’ve got to do well at Bowling Green,” McCormack said.