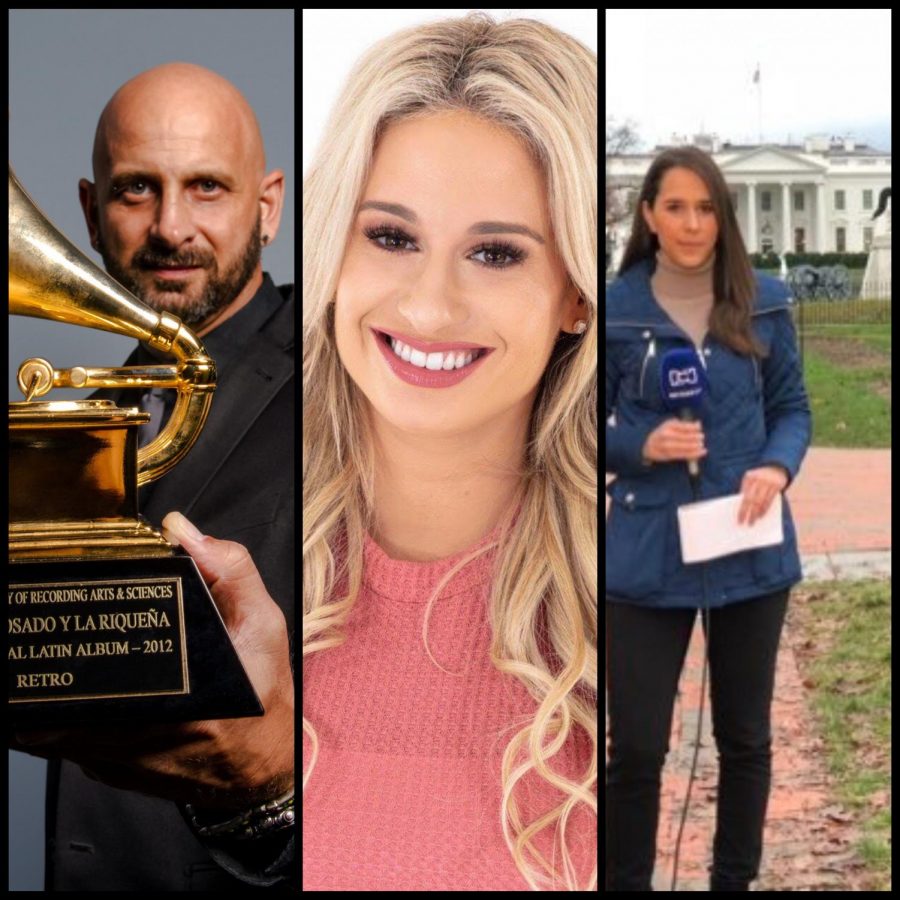 Since 1961, FAU has been preparing millions of students for the workforce after college.

The connections made, experience earned, and knowledge obtained in courses at FAU, have been the key factors for these three FAU alumni to reach success each in different industries today.

FAU Alumni Emiliana Molina, Marlow Rosado, and Racquel Goldy are all currently fulfilling their dreams. From working at the most prestigious news networks, winning several Grammy awards to being the main on-air personality for a radio station, all these former FAU students have shown that their time at the university guided them to get to where they are today.

Emiliana Molina is a journalist who has worked for the top major news and media companies in the nation including NBC News, iHeart Media, Noticiero CMI, Entravision Communications, NTN24, and NBCUniversal.

Molina said her passion for media began in FAU’s very own Owl TV. Molina originally wanted to major in psychology and eventually become a psychologist, but when she came across Owl TV, she was immediately drawn into a field that could potentially be her calling.

This eventually led her to switch from her psychology major to communication studies, making Molina’s ultimate goal to get into the White House more of a reality.

Molina says that the professors at FAU and the overall opportunities and support that Owl TV offered to her had a real impact on her career.

Owl TV allowed Molina to network and make the connections that would become crucial for her to put her name out in the industry. It gave her the hands-on experience she needed to make it in this career.

“The classes, alone just mass communication courses… writing essays and stuff like that really won’t do it for the industry,” says Molina.

Molina says that the most memorable experience she cherishes from her time at FAU was Owl TV’s traveling experiences. She says that Owl Tv would take students to different conferences to become more involved in the news industry. Students would listen to several guest speakers and network with different professionals in the industry.

This allowed her to better understand how she needed to proceed to reach her ultimate goal.

However, when COVID-19 hit, Molina discovered that the industry was not doing it for her anymore and she decided it was time for her to create her own project.

“It’s probably the best thing you’ll ever do for yourself,” said Molina. “The way that journalists are reporting has lost a lot of value, especially because of the 24-hour news cycle, and the pressure that is put on journalists as multimedia journalists. So one person is doing the job of five different people on the field, which eventually leads [to] unfortunately, a lot of superficial reporting, and a lot of mistakes being made.”

Molina is currently working on two projects called “The Awakened Journalists” and “Media Healers” that she has created during this COVID-19 pandemic.

Molina says that through all her years of experience in this field, she can say firsthand that it is very challenging and can severely affect one’s mental health.

Working 10 to 11 hours a day can be a real struggle for journalists to live, she says.

Hence, the idea behind “The Awakened Journalist” is to help guide journalists to take care of themselves, she says.

“Eventually, my main goal [with “The Awakened Journalists”] is to help shape the news industry to do better storytelling … do more fact-checking, … invest more resources in getting journalists the right tools,” says Molina.

“Media Healers” is just beginning to take off, Molina says, but she eventually hopes to be able to speak to journalists and news outlets and help transform the type of journalism that is being done today.

“I think Americans deserve better journalism, better reporting, better information, and a lot more investigation. And I think the pressure that we have, the 24-hour news cycle, or even social media has definitely left a lot of news outlets without the tools, the time, or the resources to do deep investigative reporting, and it is much needed,” she says.

“The Awakened Journalist” is available on Instagram, Spotify, Breaker & more.

Marlow Rosado is a winner of an American Grammy, a Latin Grammy, pianist, composer, and producer. He has over two decades of experience in the field of tropical music. Rosado was born and raised in Puerto Rico.

Rosado’s passion for music all began when he was a child. For Christmas, he had asked his mom to get him a yellow Tonka truck; however, when Christmas came and he opened his gifts, he received a musical organ built by his uncle.

Rosado got accepted into several universities before choosing FAU; however, he did not want to leave his home in South Florida because of his mom and his girlfriend, who is now his wife.

He says that back then, the university’s musical department did not have many Hispanic students.

After receiving his degree in Music Ed and Jazz Studies, Rosado went on to teaching music to students. He later resigned from this position and continued to attend workshops and training to further develop his musical skills.

“[FAU] gave me the tools to be able to [teach music and further develop my skills],” he said.“We were able to bring in a Latin drummer, a Latin bass player, and I sort of helped develop more of a Latino presence…within the music department .”

Rosado was able to work alongside American songwriter and producer, Desmond Child, which gave him an opportunity to work with Ricky Martin.

“[It also] provided credibility as I’ve grown in the industry, having that around me,” he said.

Rosado says that the name Bivira from his music publishing company came from both of his daughter’s names. One is forward and one backward, he says.

On his most recent album, Los Colores de la Salsa, one of the singles titled “Depende de ti” which was released a little over a month ago has over a million views on YouTube.

On April 30, Rosado released his first Latin Jazz album featuring the Cuban musician Chuco Valdes. He says he is excited about this album because it’s the music he went to school for, jazz.

Recently Rosado has opened a record label alongside the past Sony music president Angel Carrasco titled Doral Music, where he has several records being produced.

Racquel Goldy is a Media Personality, Digital Host, and Social Media, expert. She has over five years of experience in the entertainment industry as a reporter for the South Florida Journal, In-Arena Host/Pre-Game Host for the Florida Panthers, on-air personality for the afternoon drive on Revolution 93.5 to name a few.

Goldy’s passion for media all began when she was a child. She grew up watching Total Request Live and E! News every day and was always really interested in the work done.

She loved watching all her favorite artists like Britney Spears, the Backstreet Boys, and NSYNC getting interviewed and seeing a connection between fans and artists.

“I was so infatuated with… [the media industry] and I knew that I needed to be involved in that space somehow,”

Before going to FAU and studying multimedia journalism, Goldy wanted to move to LA and become a backup dancer.

When you decide you want to become a dancer, you must have a backup plan because you could get severely injured at any minute, and all your plans can change in a second, she says.

With just a couple of days left to send in her tuition deposit for UA, Goldy saw on the TV’S in the airport, how violent Tuscaloosa, Alabama was. She said it looked like a “war zone”.

Therefore, after seeing so much violence occurring in Tuscaloosa, Alabama, she decided not to attend UA and ended up enrolling in FAU since she had already toured the university before and liked the campus.

She says she loved her time in Boca Raton and made so many connections and great friends that she still has to this day.

The most memorable experience Goldy cherishes from her years at her University was the strong friendships she made in her journalism classes.

“There was … sweat and tears and just … a lot of ups and downs but we really buckled down and helped each other,” she said.

Goldy emphasized how important it is to know the person next to you.

“If you don’t know the person next to you, you need to know them and you need to be their friend, add them on social media, get their phone number because you never know what can happen in the future,” she said. “The world is so small.”

Before receiving an opportunity to work on Revolution 93.5’s afternoon show, Goldy was a digital and interactive host for the Florida Panthers NHL team.

During a game, Goldy met some of the on-air personalities of 93.5 and the sales director. She then told them that if they ever needed a guest host, she would be willing to help

The day came when she got contacted from Revolution 93.5 and was asked to be the Marlins Park opening day correspondent around 2018. This opened the doors for her to do freelance jobs for the station back then.

In 2019, she ended her position with the Panthers and was on the lookout for a new opportunity.

After she applied for a multitude of jobs in different areas of the entertainment industry, she decided to contact Revolutions 93.5 sales director again to see if they had any open positions. The sales director eventually got back to her and told her to stop by the station to have a meeting with him.

“I kind of honestly pitched myself, I was like, you need me because … I’m your demographic… I have radio, I have this and that,” she said.

For approximately a month, Goldy was put on a job trial period for the morning show. As time passed, she lost hope that she would get a position at the station and began making plans to move to LA.

Yet, one day, she received a call from the station and was offered a position as the on-air talent for the afternoon show.

However, due to the current COVID-19 pandemic, the team at the station was let go.

“I learned so much [at Revolution 93.5], and I am so thankful for that opportunity,” she said.

Goldy is currently a content creator on YouTube for her channel Racquel Goldy, a reporter for Eye on South Florida, and is co-host of Millennial Girls Podcast.

Ever since the pandemic started, Goldy says she has not done much with Eye on South Florida.

Goldy’s podcast was born during quarantine alongside Natasha Salehi, who she worked with on Revolution 93.5 and featured on Billboard magazine after getting an exclusive interview with Martin Garrix.

In their podcast, both talk about mental health, self-love, and much more.

Katherine Ambrosio Villegas is a contributing writer for the University Press. For more information regarding this or other stories, email [email protected].