Analysis: Wide receiver Tavaris Harrison has a chance to earn a spot in the NFL through the draft

Also known as “Pico,” Tavaris Harrison proved his aptitude of speed by getting to the ball, catching it, and taking it to the endzone. 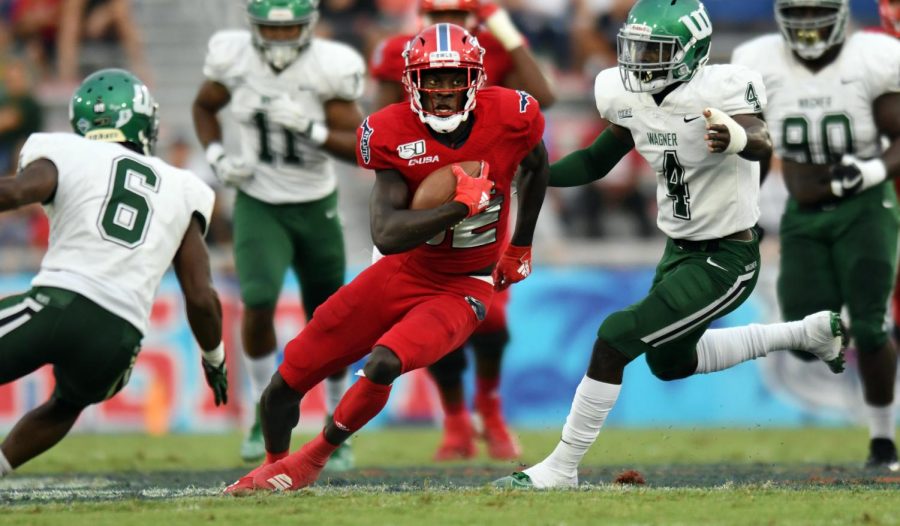 Florida native Tavaris Harrison joined the FAU football program in 2016 as a true freshman where he played out the rest of his collegiate career up until 2019.

Since his time at FAU, the wide receiver has had a telling experience with the Owl program as his latest career highs include a total of 523 yards, two touchdowns, and 48 long yards.

After opting out of the 2020 football season, Harrison showed up to the NFL Pro Day event on March 27, and worked to show officials and coaches just what he is capable of in the leadup to the 2021 NFL Draft on April 29.

Also known as “Pico,” Harrison proved his aptitude of speed by getting to the ball, catching it, and taking it to the endzone.

Reviewing his latest stats and accomplishments as an Owl, Harrison proves to be a player and teammate that can deliver while continuing to grow as an athlete.

Harrison told the Palm Beach Post that he keeps a healthy mindset. “I’m maximizing every rep that I get, so that’s all I can do is just go out and work hard,” he said.

Going against Ohio State in 2019, Harrison had four receptions for a total of 57 yards, including a long of 38 yards. In that same year, he recorded a 16-yard reception in the Owls 41-3 win over ODU.

Having those performances against well-known teams allows Harrison to gain recognition from scouts as they look for receivers that can handle higher levels of competition.

Harrison opted out of this past season, which took away his opportunity to show agents, coaches, and other officials his most up-to-speed capabilities.

As a wide receiver, Harrison could utilize the field in a more effective way by picking up a greater amount of yards. Over the course of four years, his total yardage as an Owl is 1,272 total yards with a total of three touchdowns.

Even though Harrison has the attitude needed to endure tough stretches of games, the lack of catches from those stretches can be seen as a concern by scouts.

Harrison must manage through that inconsistency for NFL coaches to count on him as a reliable receiver on their rosters.

Harrison’s best chance to get an opportunity is if he goes to a team that has issues with the wide receiver position.

There are around 10 NFL teams who could use some help on the receiving end like the Philadelphia Eagles, Baltimore Ravens, New England Patriots, Detroit Lions, Indianapolis Colts, Houston Texans, Las Vegas Raiders, Miami Dolphins, New York Jets, and the Tennessee Titans.

If Harrison sees an opportunity to get drafted, I would say that either the Lions, Jets, or Titans are the teams most likely to draft him. Even if their reasoning for drafting him is likely for needed depth, he can still take advantage to prove himself to possibly become one of their main receivers.

Despite the chance that Harrison goes undrafted, he has the talent that can warrant him a spot on a practice squad for one of the teams mentioned. As long as he maintains his attitude and form, he is bound to get an opportunity somewhere in the football world.