Strauss passed away in January and has left an imprint on her FlyGirls teammates due to her resilience and strength. 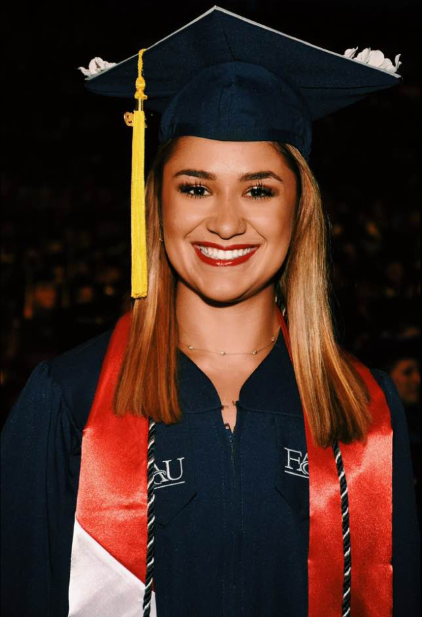 Florida Atlantic University alumna Victoria Strauss passed away in a Columbus, Ohio parking garage on Jan. 18, at the age of 23.

According to reporter Bethany Bruner of the Columbus Dispatch, Strauss dropped her credit card while paying to leave the parking garage. When she leaned out of her car to retrieve it, she accidentally hit the accelerator causing her head to become trapped between the car and the payment kiosk.

Strauss graduated from FAU in the spring of 2019 with her bachelor’s degree in psychology and was studying for her master’s in social work at Ohio State University. While an undergraduate student, she left her mark as the co-captain of the FlyGirls dance team.

She dedicated herself to fitness as well as the outdoors, often enjoying Boca Raton-area beaches, but those close to her noted her deep passion for dance.

“Dancing was her outlet…you could tell she was dancing from her heart all the time,” said Jacquelyn Castore, a fellow FAU alumna and Strauss’s team member for four years and co-captain of the FlyGirls.

In 2017, Strauss’s father passed away. “For so long I was struggling because I didn’t know if he was okay. I had lost my faith and wondered where he was,” Strauss wrote in a Facebook post.

Strauss often used social media to express her struggles with the loss of her father and conveyed before her death how she had begun feeling at peace, knowing that her dad was still with her.

Beginning school with an interest in physical therapy, she later switched her focus to psychology and social work with a dream of helping young people like herself struggling with their mental health or with loss, according to Castore.

“She would always go above and beyond for everyone,” Castore said.

With everything that Strauss went through at such a young age, dance continued to be an important outlet for her healing process.

“Watching her growth and her maturity and overcoming what life gave her, it was good,” said Claudia Soto, Strauss’s FlyGirls coach for four years. “With her dad’s passing, it was just a very difficult year for her and one of the best memories was seeing her kind of heal through that with dance.”

Strauss proved herself to be a passionate dancer and the kind of person who would give the shirt off of her back to anyone who needed it. She also had a fun-loving personality that her teammates remember fondly.

“She kinda came onto the team like guns blazing, she was a huge personality from the get-go and she was really a light,” said Madison Fillingham, a FlyGirls teammate of Strauss’s for three years.

Fillingham smiled, remembering Strauss’s light-hearted, goofy personality. One day, when Strauss needed a babysitter for her pet fish, she brought it to their arena during practice.

Strauss’s influence on her team went beyond the dance mat.  “She had this way of changing the energy. If she missed a day [of practice] everybody felt it,” Castore said.

As positive as Strauss was, she still had her struggles. Her junior year was particularly rough due to her father’s passing and her team members remember how proud they were of her perseverance heading into the National Dance Association’s Collegiate National Championship that year in which they won second place.

Being able to watch Strauss heal through dance with the support of her teammates was a notable experience for Soto.

“I learned that year that this is more than a dance team, it’s a family,” Soto said.

Fillingham recalled a moment in which she had to lift Strauss up and walk with her; it was a move that mirrored the support the team gave her: lifting her up and helping her back onto her feet.

“When we danced together on that stage, it was more than just a dance, it was symbolic of that year we overcame together,” Castore said.

When recalling their friendship, Castore remembered a night she and Strauss went to a buffet for dinner and before leaving, ended up on the roof of Castore’s car talking about life and their future until 3:30 in the morning.

“She made a huge impact on all of our lives and that, I don’t think that’ll ever go away,” said Fillingham.

Castore still looks up to Strauss for her positivity, strength, perseverance, and her dedication to helping others. She explained that Strauss’s sense of love taught her to love herself and how to be a better friend.

“She taught me to get back up…to make every day important,” said Castore.

Strauss’s family could not be reached for comment. The University Press staff sends their deepest condolences to her family.

Gillian Manning is the Copy Desk Chief for the University Press. For information regarding this or other stories, tweet her @gillianmanning_ or email [email protected]