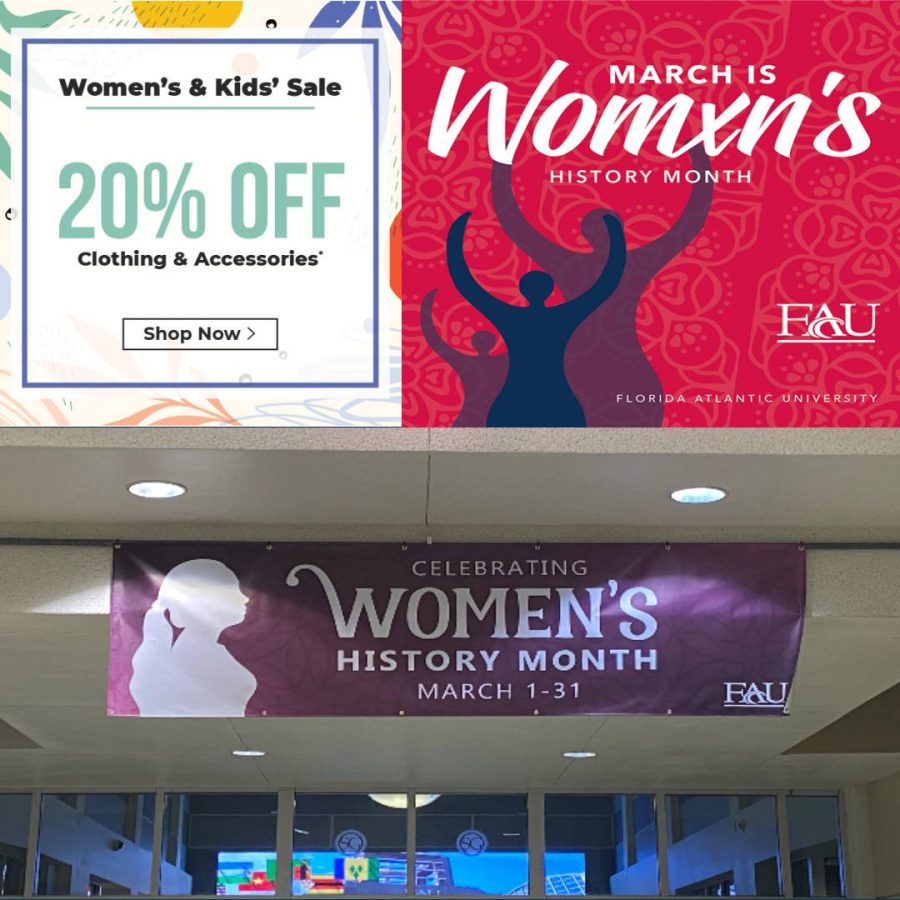 Collage made by Gillian manning.

The FAU Division of Student Affairs sent a student-wide email on March 1 regarding the celebration of Women’s History Month. In the email, the term “womxn” is used in place of “women.” The terminology is inconsistent with other emails that the university has sent out as well as a sign within the Student Union that uses the typical term “woman” instead of “womxn.” FAU’s use of the term has no clear purpose.

The term stirs up different ideas as some argue it is trans-inclusive or that it makes women more independent of men, but frankly, it’s just transphobic and exclusionary.

The history of “womxn”

The term “womxn” has many meanings and origin variations, depending on who you ask. Some argue that it includes trans women and that since so much of our language and culture revolve around men that removing the “-men” from “womxn” adds a better sense of individuality.

As discussed by Alex Regan for the BBC, the term “womxn” is debated amongst feminists and trans activists due to its less than inclusive history and yet institutions continue to use it.

In 2018, the Wellcome Collection, a museum and library in the U.K. focused on health, used “womxn” while promoting a new program and received public backlash due to the transphobic nature of the word.

In 2020, Tedx London opened a program titled TedxLondonWomxn to an immediate outcry for the same reason.

On March 1, popular streaming platform Twitch released a promotional video for Women’s History Month including the word “womxn.” The term then began trending on Twitter due to the immediate and large amount of backlash, again, because of the transphobic connotation.

Twitch deleted the original video and on March 2 tweeted an apology that said, “While we originally wanted to use a word that acknowledges the shortcoming of gender-binary language, after hearing directly from you, including members of the LGBTQIA+ community on Twitch, we will be using the spelling “women” moving forward.”

What’s wrong with the term?

How we view gender, just like gender itself, is fluid. The term “womxn” was made almost five decades ago; it’s outdated and no longer serves its purpose. It otherizes trans women. Trans women are women and there is no need to use separate terminology.

Trans woman and popular Youtuber Natalie Wynn tweeted about the terminology on March 1. “Who is the X for exactly, who is it supposed to help?” she wrote.

It’s been argued that an “x” includes nonbinary people, similar to terms like “folx” and “Latinx.” Regardless of your feelings on “folx” and “Latinx,” terms that rightfully receive an equal amount of pushback, it must be acknowledged that those who identify as nonbinary are much less likely to use the term “woman” or “womxn” to identify themselves, the same goes for many trans women. I am thoroughly confused by what institutions like FAU think they are accomplishing by utilizing this language.

On March 1, a transgender Twitter user posted, “Saying ‘womxn’ to include trans women doesn’t help us. It harms us. All we want is to be called women, stop categorizing us as something else. Please.”

The term creates division by not only separating transgender women from cisgender women, women who identify with the gender assigned to them at birth, but also by giving those who oppose transgender or feminists movements a reason to be more critical of trans-inclusivity. Anyone using such an unnecessary term allows transphobic people to say that trans people ask for “too much” or express other antagonistic views. The term makes it even more difficult to garner support for the transgender community– a community that deserves as much support as it can get.

Dr. Andrea Guzman Oliver, Interim Director for FAU’s Center for IDEAS and Associate VP of Student Outreach & Diversity, said, “the decision to use such words is at the discretion of the individual and depends on how they self-identify. It is our hope to create more inclusion and visibility by using the term “womxn.”

Anyone can identify themselves in the way that makes them feel most comfortable, but considering the trans-exclusionary history of “womxn” and its years of international resistance, it isn’t appropriate for FAU to be supporting its usage since it claims that, “Diversity and inclusion are an essential part of the foundation of Florida Atlantic University.”

Gillian Manning is the Copy Desk Chief for the University Press. For information regarding this or other stories, email or tweet her @gillianmanning_ or email [email protected]