The Owls improve to 11-9 overall with the victory. 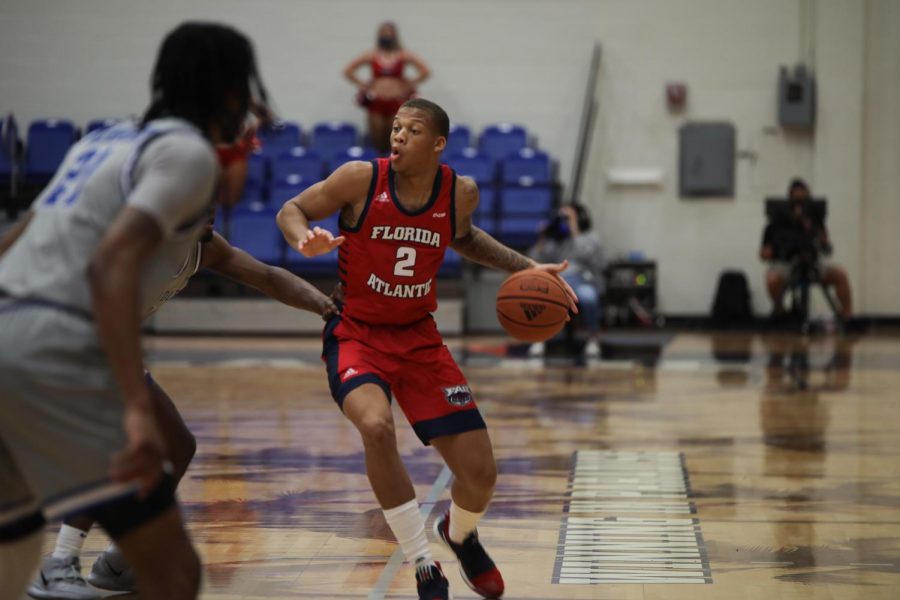 Everett Winchester (pictured #2) led FAU in assists with six in the win over Middle Tennessee on Thursday. Photo courtesy of FAU Athletics.

The Owls got the tip-off to start the half and junior forward Karlis Silins was able to get a layup with an assist by senior guard Everett Winchester. The Raiders started cold as they missed their first five shot attempts and shot 8-30 from the field in the first half.

Junior guard Michael Forrest ran a fast break to the other end of the floor and was fouled on the play. His two free-throws were a success as FAU shot 91% from the free-throw line. The Owls were on an 8-0 run.

Both teams looked for chances to score but found themselves scoreless. The Owls missed three of their three-point attempts as they shot 18% from three in the first half. After a missed jumper from MTSU redshirt junior guard Jalen Jordan, sophomore forward Tyson Jackson was able to get the rebound and score the first two points for the Raiders.

The Raiders picked up the pace after sophomore guard Eli Lawrence blocked a layup from sophomore guard Kenan Blackshear. Lawrence got the chance to run a fast break and scored in the paint.

FAU continued to score as the team shot 41% from the field and the Raiders remained stagnant. Two layups and three free-throws by freshman guard Nicholas Boyd contributed to the Owls’ points and with 10:17 remaining, the Owls were up 17-6.

Head coach Dusty May was pleased with the way Forrest, who had 14 points, and Boyd, who contributed nine points, were playing.

“Our guards defended with great energy and effort. They chase screens, and when you look at the production of Middle Tennessee state’s guards over the course of their career, they are very productive, talented, athletic and can shoot,” May said. “I thought our guards challenged everything. They forced them into ball screens, they challenged their threes. Just an overall great defensive effort by all of our guards.”

MTSU found themselves trailing behind. Despite having redshirt junior forward Deandre Dishman lead the team with 10 points and six rebounds, including help from Lawrence, who had nine points and five rebounds, their efforts would not be enough as the Owls ended the first half leading 37-24.

Silins and Forrest started off strong in the second half with consecutive layups and three-point field goals. Although they struggled in the first half, the Owls improved and shot 50% from three.

“We did a good job of getting in the paint because, as it’s no secret, [MTSU] are not great at two-point percentage defensively,” said Silins. “They are great at guarding the three. So that’s where we put a little more focus on.”

FAU got sloppy as the team turned the ball over 14 times and the Raiders picked up seven steals as a result.

“The turnovers kill your defense and efficiency numbers. There are some other areas we have to clean up like free-throw shooting but more than anything else, the turnovers were like a double win,” said May.

With two minutes remaining, both Lawrence and sophomore guard Elias King landed back-to-back three-pointers for MTSU. With the shot clock winding down, King was able to produce one last layup and a free-throw before FAU responded with their final layup from junior forward Madiaw Niang.

Silins said that for the team to prepare for the last home game of the season, “we have to have a mentality like we just got beat by 30, not won by 30. That’s what we’re going to focus on tomorrow.”

The Owls and Raiders will face each other again on March 5 at 6 p.m.  in the Abessinio Court at FAU Arena. It will be broadcast on Facebook Live.

Gabriella Brito is a contributing writer for the University Press. For information regarding this or other stories, email [email protected] or tweet her @gaby1brito