Men’s Basketball: Owls advance to the quarterfinals after a 76-70 nail-biter against UTEP

Karlis Silins had a career-high 22 points in the win. 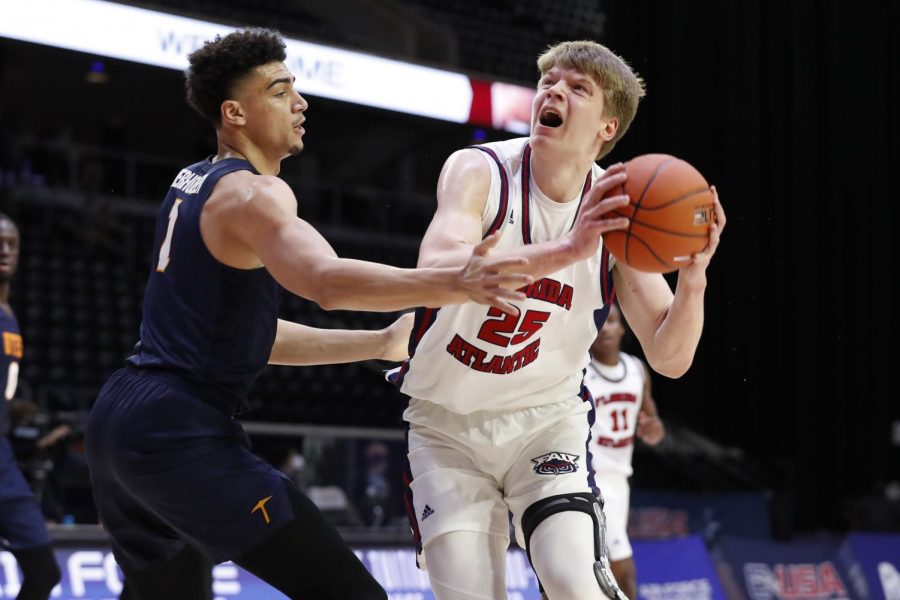 The fourth-seeded FAU Owls won their fifth straight game in the first round of the C-USA tournament in Frisco, Texas on Wednesday night, outlasting fifth-seeded UTEP 76-70 in a nail-biting, physical contest that wasn’t decided until the final minutes.

Junior center Karlis Silins had a career-high 22 points before fouling out late, shooting 7-12 from the floor, repeatedly burning UTEP defenders in the pick-and-roll and the post for short jumpers and hooks. Even when Silins didn’t score, he created havoc whenever he had the ball. UTEP defenders hacked him often and he finished 7-9 from the free-throw line for the night.

“He’s a tough cover,” head coach Dusty May said of Silins. “He’s very versatile when he catches it from 8-12 feet on the move, he’s got good balance and good touch. We were able to get it to Karlis and he made great decisions.”

Sophomore guard Kenan Blackshear struggled from the floor, shooting 1-5 from the floor, but still chipped in seven points, snatched eight rebounds and drew a huge charge on UTEP redshirt junior Souley Boum that iced the game for FAU. Boum led UTEP with 23 points despite shooting 8-21 from the field.

UTEP sprinted out of the gates to a 6-0 lead, but the energy of the game changed when FAU coach Dusty May inserted senior forward Jailyn Ingram into the game off the bench. Ingram, struggling with injuries lately, drilled two threes and settled the FAU offense down, kick-starting a 15-4 FAU run.

The Owls played unselfish ball, passing the ball from side-to-side to find the open man, splashing their first four three-point attempts. They were also physical on defense, swarming the Miners anytime they entered the lane. UTEP missed its first six three-point attempts and shot two airballs in the first half.

Seven turnovers from FAU and hot shooting from Boum and junior guard Jamal Bieniemy kept UTEP in the game. UTEP ended the half on an 18-8 run with a twisting, acrobatic layup from Boum bringing the Miners within one at the break at 34-33.

The game fittingly changed on a referee’s call with 3:24 to go. With the game tied at 64, UTEP redshirt senior Bryson Williams appeared to score an and-one layup to give the Miners the lead, but the baseline official ruled that Williams was out-of-bounds before being fouled. Replay showed the referee was incorrect; Williams’s foot never stepped out-of-bounds. Greenlee made a layup on the other end, followed by an offensive putback of a Silins miss, and UTEP never regained the lead.

UTEP had one final chance, trailing 72-68 with 31 seconds left after Blackshear split a pair of free-throws. Boum had a head of steam towards the basket, but Blackshear stepped in at the last minute, drawing a charge that finished UTEP’s season. Freshman guard Nicholas Boyd iced the game at the line for FAU.

The Miners went scoreless for more than six minutes down the stretch, only scratching out points at the free-throw line. FAU held UTEP to 39% shooting for the game, including a putrid 3-18 showing from behind the three-point line. UTEP was held to six assists in the game.

FAU took advantage in the rebounding department, out-rebounding UTEP 41-34 for the game. One advantage UTEP had over FAU was turnovers, forcing 17 of them from the Owls.

“We rebound with five guys,” May said. “I thought our guards came down and dug some out, we were very physical on our block outs. We had to out-rebound them to win, because we weren’t able to turn them over the way they turned us over.”

May was pleased with the Owls’ efforts down the stretch against UTEP.

“We were able to get stops and come up with some loose-ball rebounds,” May said. “We stepped up and made our free-throws, we’ve struggled shooting from the line at times, so I’m very pleased with our guys making big shots down the stretch.”

FAU shot 8-16 from behind the three-point arc and dished out 14 assists.

“We’re gonna need everyone on our roster to step up,” May said. “We had a couple guys not play major minutes, and they came in, maybe it was a big stop, maybe it was big free throws, but they really contributed to the team win.”

The win keeps the Owls’ season alive, as they advance to face top seed Louisiana Tech on March 11 at 9:30 p.m. It will be broadcast on Stadium..

Michael Gennaro is a staff writer for the University Press. For information regarding this or other stories, email [email protected] or follow him on Instagram @mycoolgennaro.