The Owls end the season with a 12-9 record overall. 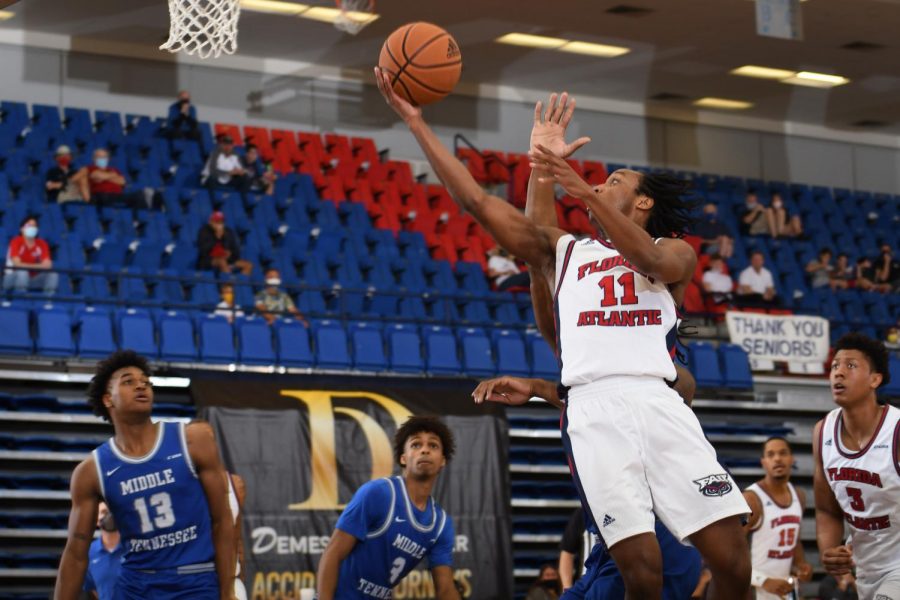 Michael Forrest (pictured #11) goes up for a layup in Friday's game against Middle Tennessee. Photo courtesy of FAU Athletics.

Within the first five minutes of the game, the Owls’ offensive skills showed as the team worked together to make sure their plays connected just as much as the communication on the court.

The Owls’ strategies in working together as a team was apparent in last night’s game.

Junior guard Michael Forrest led the team in scoring with 16 points, shooting at 75% from the field and did not neglect his notorious three-point percentage as he shot 4-6 from the three-point line. Senior guard Everett Winchester also did his part in carrying a heavier load with nine points.

Sophomore guard Kenan Blackshear showed his ability to step up to the plate, though he is on the younger side, as he contributed in leading alongside Forrest and Winchester with 12 points and shot 50% from the field. His game, tonight, gave a sneak peak on how Blackshear has the potential to be a true leader for the Owls in the years to come.

Although Jailyn Ingram is recovering from a minor injury, the senior forward still grabbed 12 rebounds for his team.

“He’s one of the best players in the league,” head coach Dusty May said. “Great players don’t always play great, they play well a lot of the time. We’re not worried about Jailyn at all, he’s still coming back.”

The two teams previously played each other on Thursday, where FAU won in a 80-50 blowout.

Coming off of the half, the Owls seemed to slow down their pace as they had trouble bridging their plays together.

“I feel like we kind of let our foot off the gas peddle a little bit,” Forrest said.

The game intensified as the Blue Raiders gained a second wind and began to perform a better game of basketball.

The team ultimately put up a total of 32 points in the second half which outdid their number of points made in the first half alone and made a close comeback, but it still wasn’t enough to steal the win from FAU.

Eventually the Owls gained back their momentum, realizing their ultimate goal: winning as a team.

FAU will be headed to Frisco, Texas this upcoming Monday to compete for the title of Conference USA Champions. The tournament will start on March 10 and conclude on March 13.

The Owls will play the University of Texas at El Paso (UTEP) in the first round of the tournament on March 10 at 9:30 p.m. It will be broadcast on ESPN+.