Redefining the average “spring game” by forming teams through a draft selection, Jon Bills made sure of one thing: that his team would be the first of its kind and it showed. 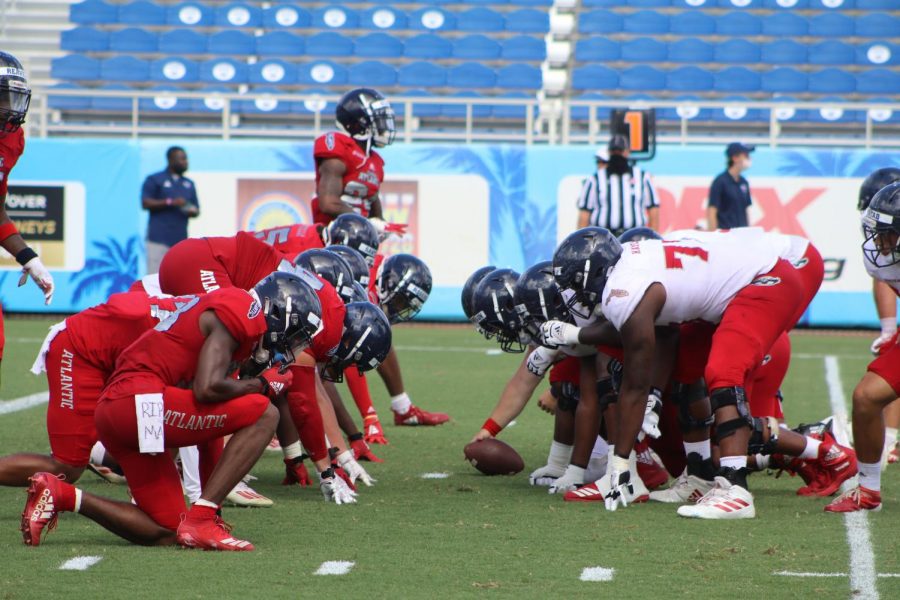 Team Bills (white) gets set to play the ball at the line of scrimmage against Team Perkins (red). Photo by Logan Agostino.

The White Team, headed by coach Jon Bills, was nothing short of hungry for a spring game win as his team won 23-18 over the Red Team, led by Chris Perkins, on Saturday afternoon.

Above it all, both teams played with the goal of making the late coach Howard Schnellenberger’s dreams a reality. The morning of the game, it was made known that Schnellenberger had passed away.

After being a lead role in the initiation of FAU’s football team in 1998, Schnellenberger paved the way for all other coaches and athletes to continue on his legacy.

“Everyone should, must, and will live up to that,” head coach Willie Taggart said.

It seemed as though the entire football team came together and played in the spirit of former coach Schnellenberger as they seemed to really enjoy the game.

Redefining the average “spring game,” by forming teams through a draft selection, Bills made sure of one thing: that his team would be the first of its kind and it showed.

Taggart expected the White Team to show up defensively, as the coaches were thoughtful in their defensive draft selection. The White  Team’s defense applied the right amount of pressure that ultimately caused an incomplete play by Perkins’s squad.

Bills’ team made an unprecedented interception in the third quarter, which added to their score, putting them at 20 total points with about eight minutes left in the third.

Freshman running back Zuberi Mobley had a total of six carries and led with 63 rushing yards in, which 58 were made in the first quarter. To top it all off, the freshman had the first touchdown of the game.

“I’m more of a momentum player, once I get my momentum, for me it’s lights out,” Mobley said. “After that first run I just knew it was going to come.”

Mobley came to FAU fresh out of high school to get a feel of what college football is like and he said he feels it definitely has helped him get used to the system and the way things operate. The Red Team struggled getting points up on the scoreboard as it took them almost a full three quarters to score.

Freshman kicker Morgan Suarez was the first to put points on the board with a 51-yard field goal with 1:50 left on the clock.

“I can’t stress that enough how good the spring has been for us and not just for our players, but coaches,” coach Taggart said.

Quarterback Willie Taggart Jr. was able to connect the play with teammate, redshirt senior running back Johnny Ford for a 74-yard touchdown and with just minutes left, Taggart Jr. found redshirt junior wide receiver Brandon Robinson on the field for a final touchdown for the Red Team.

FAU’s Spring 2021 draft selection was the highlight of this year’s game as it restored the spirit of the Owls and hope for the 2021 football season.

The Owls will play at home on the Schnellenberger field, again, on Sept. 11 against Georgia Southern.

FAU, up until fall ball begins, will continue to prepare for an improved season ahead.

One thing is for certain: the Owls will remember and honor coach Schnellenberger in all that they do.

“I admired him and the things that he has done over the years,” Taggart said. “I remember telling him that ‘whatever we can do, I can do, to get you in the coaches hall of fame we need to make sure we do it.’”