Head coach Willie Taggart hopes that with the team finally being able to participate in offseason training, they can build on last season’s successes and minimize its failures. 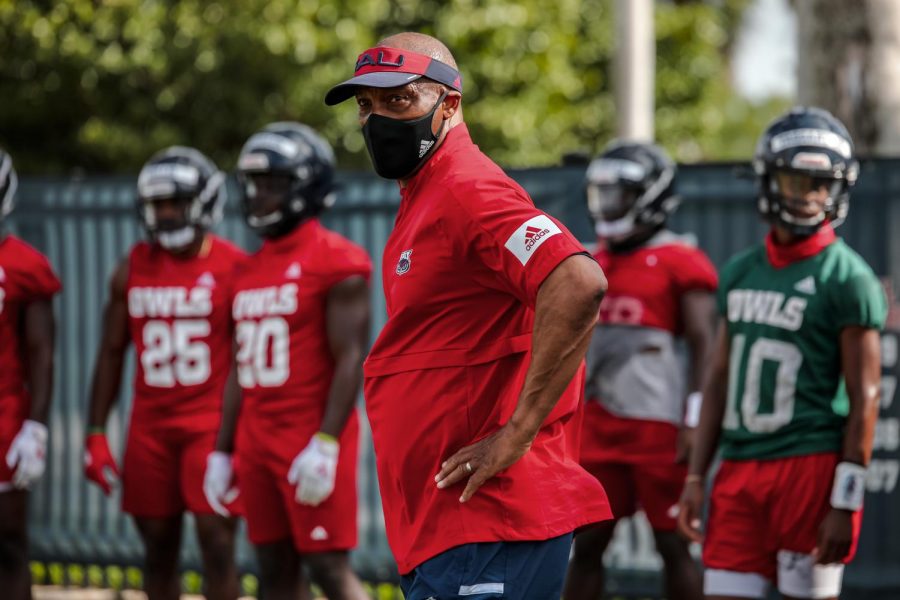 Michael Johnson will play a crucial role as the co-offensive coordinator and the quarterback coach for the Owls. Photo courtesy of FAU Athletics.

Week one of spring football practice has wrapped up and head coach Willie Taggart hopes that with the team finally being able to participate in offseason training, they can build on last season’s successes and minimize its failures.

“I understand our football team a lot better. So going into spring ball now, things are a little clearer, but more importantly for me it gives us an opportunity to really work on fundamentals and techniques that I thought we struggled with last year during the season,” Taggart said.

Taggart hopes to build on a promising first season with the Owls. After a blistering 5-1 start to the 2020 season, the team faltered late and stumbled to a 5-4 finish.

In stark contrast from last season, FAU sees the return of about 85% of its players. Last season, the team featured new starters at almost every position.

While he is still unable to practice with the team, this season will see the likely return of senior linebacker Akileis Leroy. Leroy was ruled ineligible to play last season but in 2019, he recorded 101 total tackles (55 solo), 7.5 sacks, five forced fumbles, and three interceptions.

Taggart anticipates Leroy to come back this summer.

A key aspect of FAU’s success last season was its top-10 ranked defense, but it was the offense, specifically the quarterback play, that ended up holding the team back. The team parted ways with co-offensive coordinator Clint Trickett and hired Michael Johnson as his replacement this offseason. Johnson will also be the team’s quarterback coach.

Taggart believes Johnson has what it takes to improve the offense and develop the quarterbacks.

“Mike’s had the chance to coach some pretty good quarterbacks over the years at the highest levels and it’s no secret that our quarterbacks have to be developed,” Taggart said.

Johnson coached the likes of Jim Harbaugh, Drew Brees, Michael Vick, and Alex Smith over the course of his 24-year career.

Taggart did not announce who will be calling the plays this season and stresses that play-calling will be a fluid process, one that he will always have his input in.

According to Taggart, the familiarity of the offense has seen the players make drastic improvements. “The guys know the plays now, which allows us to do some things a little easier and not have to ease into certain things because our guys know the plays,” he said.

Taggart hopes that the combination of familiarity, experience, and new perspectives will improve last year’s record and get the program back on track.