Though there were a couple of bumps in their first scrimmage, Taggart felt that both offense and defense did a pretty good job meeting the requirements their positions hold. 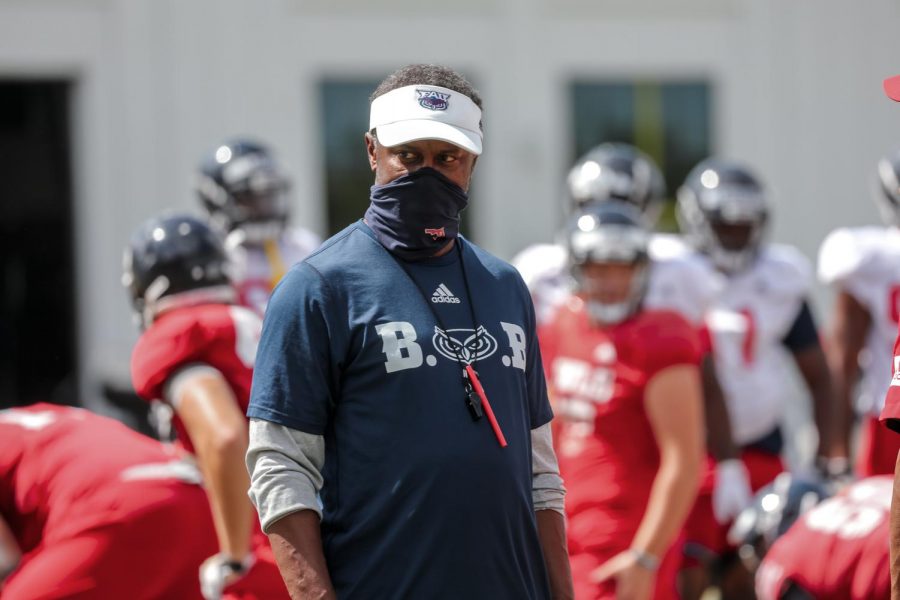 Week three of FAU football spring training has already passed but the team’s preparation continues, as they approach the 2021 spring game this Saturday at the Howard Schnellenberger Stadium at 3 p.m.

The Owls had about 26 mis-tackles out of over 100 plays in their first scrimmage.

“It was a typical first scrimmage where we have a lot of little things we need to clean up,” head coach Willie Taggart said.

Taggart is emphasizing the importance of alignment and assignment, reminding the entire team, coaches and players alike, that a play cannot be properly carried out if the players are not lined up or if they don’t know what to do next.

Though there were a couple of bumps in their first scrimmage, Taggart felt that both offense and defense did a pretty good job meeting the requirements their positions hold.

According to Taggart, a couple of players that stood out during the scrimmage was wide receiver Je’Quan Burton who “made some big time plays,” and quarterbacks Willie Taggart Jr. and Nick Tronti.

One individual who Taggart has truly been impressed by the past couple of practices is freshman tight end Jacob Pasley.

“He’s practiced with us two, three days now [and] I’m impressed with the young man,” Taggart said. “I think he’s going to be alright for us.”

This year’s spring game will be different from past spring games as offense and defense will not go head-to-head. Carrying the game out as a draft round, tight end coach Jon Bills and running back coach Chris Perkins assume the position of head coach for each team.

Taggart is looking forward to the execution of his team as they play this weekend.

“No matter who you’re in there with, we gotta execute our plays,” Taggart said. “So who can go out there under the lights and execute; on offense, defense, [and] special teams the way that we need them to.”

Taggart makes it known that what is most important is the guys going out and making plays on both sides of the ball.