The Owls scored seven runs in the fourth, including a grand slam by Victor Castillo. 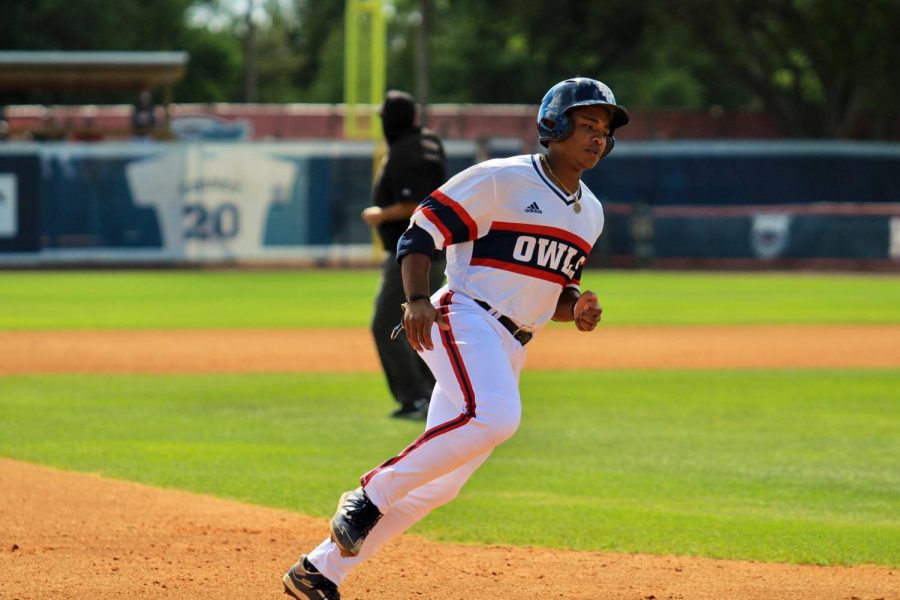 Sophomore pitcher Mitchell Hartigan started on the mound for the first time this season.

Hartigan hit the leadoff batter and allowed a single. Sophomore infielder Joe Kinker hit a three-run home run, making the score 3-0. He then walked a batter and another home run by sophomore outfielder Stephen Wilmer followed, increasing the score to 5-0. Two batters struck out to end the first inning.

Hartigan led off the top of the second inning with a single and advanced to second base on a wild pitch. Junior infielder Jared DeSantolo walked and freshman outfielder Victor Castillo popped out. Junior outfielder Jackson Wenstrom was hit to load the bases with two outs. Senior infielder Wilfredo Alvarez struck out to end the inning.

Del Prado allowed a home run by freshman catcher Mac Moise on his first pitch, increasing the lead to 6-0. Then senior infielder Richie Garcia and Kinker hit back-to-back home runs to extend the lead to eight.

Sophomore infielder BJ Murray hit a leadoff double and advanced to third on an error by the left-fielder. Freshman infielder Nolan Schanuel walked to put runners on first and third with no outs. Senior outfielder Bobby Morgensen walked to load the bases.

Hartigan hit an RBI single, driving in two runs with no outs. DeSantolo grounded into a double play, advancing Morgensen to third base. The score was 8-2.

Wenstrom doubled in the top of the fourth with one out, and Alvarez walked on four pitches. Murray hit an RBI single, making the score 8-3. Schanuel was hit by a pitch to load the bases with one out.

Morgensen hit a sacrifice fly, driving in Alvarez, making the score 8-4. Hartigan hit an RBI single, driving in Murray with two outs. DeSantolo was hit by a pitch to load the bases and then Castillo hit a grand slam to give FAU the lead 9-8.

Redshirt sophomore outfielder Brian Ellis was hit by a pitch to start the fourth and advanced to second on a wild pitch. Richie hit a single, putting runners on first and third with no outs. Kinker hit into a fielder’s choice, driving in the tying run.

Redshirt sophomore pitcher Brock Helverson came in to relieve Reese in the fourth. Reese pitched 1.1 innings and allowed one run on one hit.

Freshman designated hitter Ian Farrow was hit by a pitch to lead-off the bottom of the fifth and advanced to second on a wild pitch. Ellis hit an RBI triple. Garcia hit a sacrifice fly, making the score 11-9.

In the sixth inning, Morgensen walked, and Hartigan and DeSantolo hit by a pitch to load the bases with one out.

Castillo got hit by a pitch to drive in a run and load the bases with one out, making the score 11-10. Sophomore catcher Nicholas Toney walked on four pitches to tie the game at 11. Wenstrom hit into a fielder’s choice, driving in DeSantolo to give FAU the lead.

Redshirt junior Dylan O’Connell came in to relieve Helverson in the sixth inning. Helverson pitched 1.2 innings and allowed two runs on one hit and a walk.

Braden Ostrander came in to relieve O’Connell in the bottom of the eighth inning. O’Connell pitched two innings and walked two batters.

Alvarez hit a lead-off triple in the top of the ninth inning. Murray hit an RBI single, increasing the lead to 13-11.

The Owls continue conference play on the road in North Carolina against the Charlotte 49ers. They will play a four-game set on Friday at 6 p.m., Saturday (doubleheader) at 2 p.m., and Sunday at noon. The games will be broadcast on C-USA TV.