FAU scored a total of 35 runs in the series. 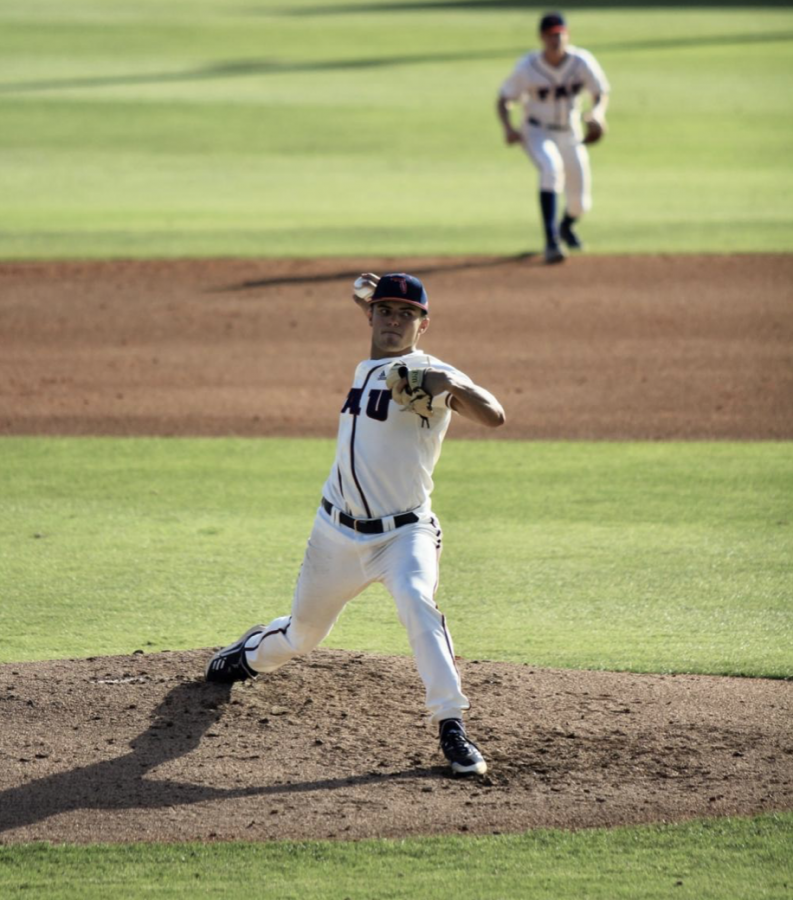 Here’s the University Press game-by-game recap of the action.

The Owls cruised in the series opener Friday afternoon, achieving their first shutout win of the season over Marshall.

FAU scored the first run of the game in the first inning when freshman infielder Nolan Schanuel got the RBI after sacrificing a groundout, allowing senior infielder Wilfredo Alvarez to reach home plate.

Singles from junior outfielder Jackson Wenstrom and Alvarez increased the lead to three in the second inning. Sophomore infielder BJ Murray then hit a double to right field, extending Marshall’s deficit to five.

The third inning featured a home run from sophomore catcher Nicholas Toney, a single from Wenstrom, and a sacrificed flyout from Murray to let junior infielder Jared DeSantolo score.

It was a great day for Hunter Cooley, as the sophomore pitched the whole game for FAU. He finished with 99 pitches thrown and six strikeouts.

Marshall failed to find any opportunities offensively as they only hit the ball four times throughout the game.

With Marshall being scoreless after seven innings, the game ended via mercy rule.

In the first of two games taking place on Saturday afternoon where FAU and Marshall played two seven-inning matchups, the Owls won their second straight game against the Herd, 5-3.

Senior outfielder Bobby Morgensen was the player of the game on the offensive side as he drove in three runs, two of them coming off of a home run which gave FAU back the lead in the fifth inning.

The starting pitcher for game one of the doubleheader was freshman Dante Visconti, who had a serviceable game pitching four innings while striking out two, but allowed one earned run, five hits, and two walks.

After Visconti, junior Dylan O’Connell came in and allowed Marshall to get back in the game to score two more runs, which gave them the lead. Junior Mike Entenza then came on to pitch three at-bats, where he was hit by the ball twice, once in the leg area and the other in his backside.

As the Owls tried to get back in the game offensively, freshman pitcher Braden Ostrander helped them win the contest. Not only did he keep the score for Marshall to only be up by a run, but he was literally unhittable as no one could get on base. He went for the final two innings, throwing four strikeouts, allowing zero earned runs, hits, and walks.

“I think super electric is very apropos,” head coach John McCormack said in regards to Ostrander. “Breaking ball was good, he was up to 95 [miles per hour], he threw strikes, he was super electric so I’ll go with it.”

Other pitching statistics had Ostrander getting his first save of the season and Entenza getting the win. For batting statistics, besides the aforementioned three RBIs from Morgensen, junior outfielder Jackson Wenstrom also got an RBI of his own. Freshman standout Nolan Schanuel drove in another RBI to bring up his total to 27 before game two, which he still leads the team in.

In the second game of the doubleheader against Marshall, the Owls won in extravagant fashion, as they beat the Herd 7-6 off of the bat of junior infielder Jared DeSantolo.

“The game did not start off the way we wanted it to after playing really well in game one,” McCormack said. “Got down 6-0 at one point and their guy [pitcher] was throwing an absolute gem, but proud of our guys who stuck around and strung up some good bats and Jared [DeSantolo] comes up with the big hit in the bottom of the seventh to walk it off.”

While the final score might say otherwise, the score by innings is not what you can rely on game in and game out. Marshall was in the lead until the final inning, where they started by scoring two runs in the first, third, and fourth inning. FAU didn’t score until the fifth inning.

The Owls were shut down by Marshall’s starting pitcher Raymond Pacella, who seemed unstoppable Saturday evening. He threw 11 strikeouts while earning only two runs in six innings with a pitch count of 99.

“Let’s give credit where credit is due, he was dynamite,” McCormack said. “You don’t see that arm angle often, like that’s a mini Josh Hader. He was tough and competitive and from a baseball standpoint, I’m happy we won, but from another perspective, that’s a tough way to lose.”

On the pitching side for FAU, sophomore Jackson Spiller got the start in game two and struggled. He pitched three innings, giving up four runs and six hits while striking out only one batter. Freshman Sam Drumheller then came in to relieve for two innings, where he allowed two more runs but struck out six. After him was freshman Nicholas Del Prado, who pitched the final two innings, giving up no runs, no hits, and striking out two. He was awarded the win.

“We pitched enough to win,” McCormack said. “[Jackson] Spiller was not good, [Sam] Drumheller after the two-run homer was really good and I thought that Del Prado was solid.”

The bottom of the seventh inning for the Owls proved to be a rollercoaster of emotions as they overcame a four-run deficit with the cards stacked against them to win.

Senior infielder Wilfredo Alvarez started the scoring with a single to right field driving in Wenstrom, and then Schanuel joined the party by singling to drive in two more, which brought his RBI total to a team-high 29.

Afterwards, Morgensen struck out looking and sophomore outfielder Mitchell Hartigan walked. DeSantolo pinch hit for Sam Low and was in a spot where every child who dreams of being a baseball player wishes he was in: bases loaded, two outs in the bottom of the last inning to win the game.

When DeSantolo singled to left field to drive in two to win the game, the crowd attendance of 286 people was loud, most in support of the home team, some showing their disappointment for the away squad.

While DeSantolo has been struggling so far in the season, the walk-off hit will do nothing but boost the confidence of the junior to have a great rest of the season.

“Happy for him,” McCormack said. “His season isn’t probably going the way he wants it, but that’s a really shining moment for him.”

FAU cleaned up shop Sunday afternoon, completing the four-game series sweep against Marshall in what was an overall great performance by the Owls.

The Owls got on the scoreboard first in the third inning when DeSantolo hit a home run to right field. This was his first home run of the season.

The Owls continued scoring in the fifth inning when DeSantolo hit a double to right field, driving in sophomore outfielder Mitchell Hartigan. Three consecutive singles from Murray, Schanuel, and Morgensen extended the lead to five.

The Owls responded in the bottom of the sixth with Alvarez hitting a single to drive in Hartigan, DeSantolo scoring due to a wild pitch from Marshall’s junior pitcher Nick Jodway, and a three-run home run from Schanuel.

FAU scored one last run in the eighth inning with a walk-on by freshman infielder Cade Parker with bases loaded, driving in Murray to have the Owls lead 11-2.

Despite Marshall’s attempts to come from behind, FAU finished them off with solid pitching in the last three innings by redshirt junior Thomas Haggerty, redshirt sophomore Brock Helverson, and freshman Jack Stroud.

The Owls will go on the road to Fort Myers, facing the Florida Gulf Coast University Eagles on March 30. The time has yet to be determined but it will be broadcast on YouTube.