The Owls allowed 12 runs in the first two innings. 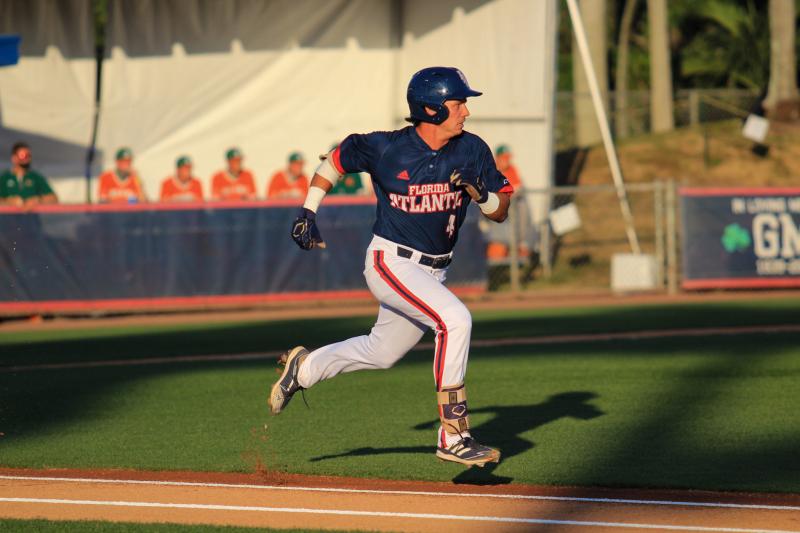 Wilfredo Alvarez speeding down the line against Miami on March 23, 2021. Photo by Eston Parker III.

The FAU baseball team (10-9) lost three in a row for the second time this season following a 14-9 loss at home Tuesday night against the University of Miami (10-7). Both losing streaks included losses to the Hurricanes.

Graduate pitcher TJ Stuart started on the mound for FAU.

Sophomore left-fielder Jordan Lala singled on the first pitch of the game. Lala advanced to second base after a pitch above the strike zone. Sophomore catcher Adrian Del Castillo reached on an infield error by sophomore infielder BJ Murray. Senior center-fielder Christian Del Castillo walked, which loaded the bases. Junior infielder Alex Toral then hit a grand slam, making the score 4-0 after the first inning.

Junior outfielder Gabe Rivera hit a lead-off single in the top of the second inning.

According to head coach John McCormack, Stuart will be out the rest of the season along with sophomore pitcher Jacob Josey due to injury.

Reese hit Pitelli, advancing Rivera. Lala hit an RBI triple with no outs, as Rivera and Pitelli scored. The score was 6-0. Lala advanced home after a wild pitch, extending the lead to seven.

C. Del Castillo got an infield single to load the bases. Toral then hit a two-run RBI single to left-center, increasing the lead to 10.

Reese was relieved after giving up six runs and allowing five hits. Sophomore Jackson Spiller came into the game with the Owls down by 10 runs in the second inning.

Junior designated hitter Raymond Gil hit an RBI double down the right-field line, making the score 11-0. Rivera hit a sacrifice fly to right field, expanding the lead to 12 with one out.

Senior outfielder Bobby Morgensen reached on an infield error. Sophomore outfielder Mitchell Hartigan hit a double down the right-field line, advancing Morgensen to third with no outs. Sophomore catcher Nicholas Toney was hit by a pitch to load the bases. Murray walked, driving in the first run for FAU. Junior outfielder Jackson Wenstrom hit a sacrifice fly to center-field driving in Hartigan. The Owls scored two runs on one hit, one error, and one walk.

Vilar hit a leadoff home run over the right-field line, making the score 13-2 in favor of Miami. The inning ended with Toral striking out.

Schanuel hit a home run to right field. Morgensen singled up the middle. Hartigan was hit by a pitch, advancing Morgensen. Toney then hit a three-run home run to left-field, making the score 13-6. The inning concluded with a groundout from Low, as the Owls scored four runs in the third on three hits.

Junior pitcher Brycen Allen subbed in for Spiller in the fourth inning. Rivera then hit a home run to left-center field, making the score 14-6.

Sophomore Brock Helverson came in to relieve Allen in the sixth. Allen gave up two hits, including a home run.

Schanuel hit a sacrifice fly in the ninth inning to drive in Alvarez, making the score 14-9. Castillo came in to pinch-run and advanced to second on a wild pitch. The game ended with a fly-out from Hartigan.

“We dug a hole and tried to get out of it, but the hole was too deep,” said McCormack. “We’ve just got to be better.”

The Owls will start conference play, hosting a four-game series against Marshall on Friday at 5 p.m., Saturday (double-header) at 2 p.m., and Sunday at 11:30 a.m. It will be broadcast on C-USA TV.