The loss marks the sixth in the last seven games for the Owls. 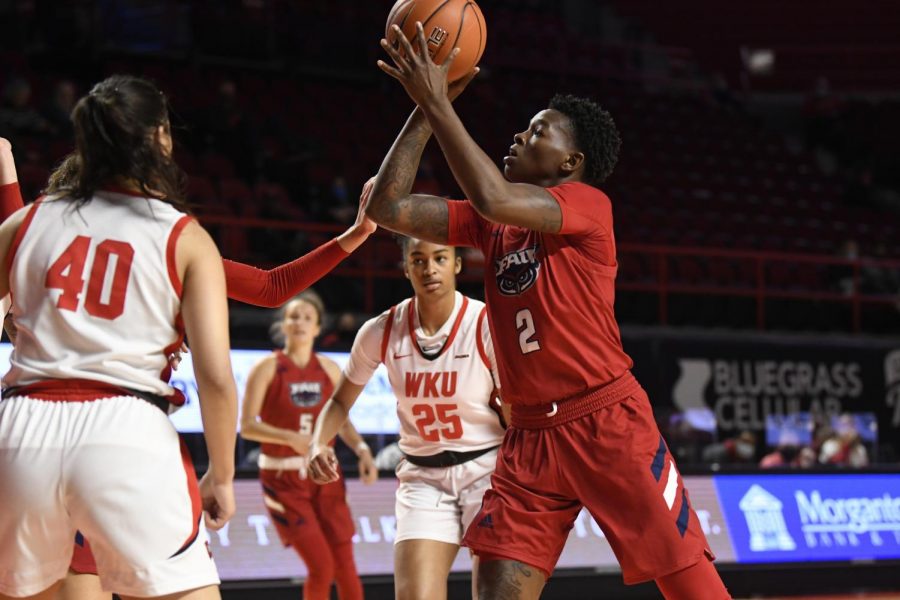 Playing for the first time since a 65-62 loss at FIU on Jan. 16, the FAU Owls (3-8, 1-6 C-USA) squandered a huge first half lead and faltered down the stretch, falling on the road to the Western Kentucky Lady Toppers (6-9, 5-4 C-USA) 71-64 on Friday night after a foul-filled game rife with missed layups and sloppy play.

The loss is the sixth in the last seven contests for the Owls.

Graduate transfer guard Iggy Allen starred for the Owls, recording a career-high 35 points on 14-23 shooting from the floor with a mix of drives and jumpers, notching her fifth double-double of the season. Allen didn’t receive much help, however, as the rest of the Owls combined to shoot 20 percent from the floor.

The Owls’ offense looked lost without Allen, who played 36 minutes. No Owl other than Allen scored in double figures; the Owls’ second-leading scorer on the night was redshirt sophomore forward Janeta Rozentale, who chipped in eight.

Redshirt sophomore guard Myriah Haywood anchored the Lady Toppers’ attack, finishing with a career-high in points and rebounds and recording her first career double-double, scoring 17 points and adding 12 rebounds. Haywood was one of three Lady Toppers that finished in double figures on the night.

Rust wasn’t a factor early, as the Owls burst out of the gate on a 21-3 run. The Lady Toppers didn’t record their first basket of the game until 2:59 remained in the first quarter.

The Owls forced nine turnovers in the first quarter amid the run, and the Lady Toppers helped their cause by shooting 3-11 from the line in the first. A scoring drought from the Owls allowed the Lady Toppers to crawl closer, however, as they clawed to within 21-8 after one frame and knotted the score at halftime 28-28.

After trailing 21-3, the Lady Toppers went on a 35-14 run to reclaim the lead in the third quarter. The Owls’ shooting deserted them, as they missed open looks repeatedly throughout the final three quarters of the game.

Fatigue may have been a factor, as the Owls only had nine healthy players and redshirt junior guard Rita Pleskevich battled foul trouble throughout. Turnovers were a problem too, especially in the third quarter. The Owls ended the game shooting 7-36 from three-point range and coughed up 18 turnovers.

WKU’s lead stayed under five points for most of the second half, but the Lady Toppers hammered the Owls on the glass, outrebounding them 59-46, including several key offensive rebounds that allowed the Lady Toppers to run clock late in the game.

Despite three separate scoring droughts that lasted longer than four minutes, the Owls remained close throughout the game. With under four minutes left in the contest, two free-throws from Allen narrowed the Owls’ deficit to 58-55.

On the next possession, however, Lady Toppers freshman guard Ally Collett got free for a huge three-pointer that extended the lead back to 61-55 with 3:48 to go. Collet shot 3-5 from three during the game, each one deflating an Owls comeback.

The Owls had one last chance with under a minute to go after an Allen layup cut the lead to 67-63. However, Collet got free on the ensuing out-of-bounds play and put in a wide-open layup to seal the game.

Several Owls players appeared frustrated with the officiating late. The Owls committed 27 fouls, and junior forward Amber Gaston fouled out in the fourth quarter. Despite all the fouls, the Lady Toppers shot only 21-37 from the free-throw line, allowing the Owls to hang around into the final minutes.

With the loss, the Owls are now 0-13 all-time at Western Kentucky and haven’t defeated the Lady Toppers since January of 2012.

The Owls will be back in action on February 6, at 7 p.m. again at Western Kentucky. The game will be broadcast on C-USA TV.

Michael Gennaro is a contributing writer for the University Press. For information regarding this or other stories, email [email protected]