FAU Baseball: The Owls are primed to contend after a long offseason

After a 10-6 season last season, the FAU Baseball team is ready to compete, as they are ranked as the top dogs in the C-USA East. 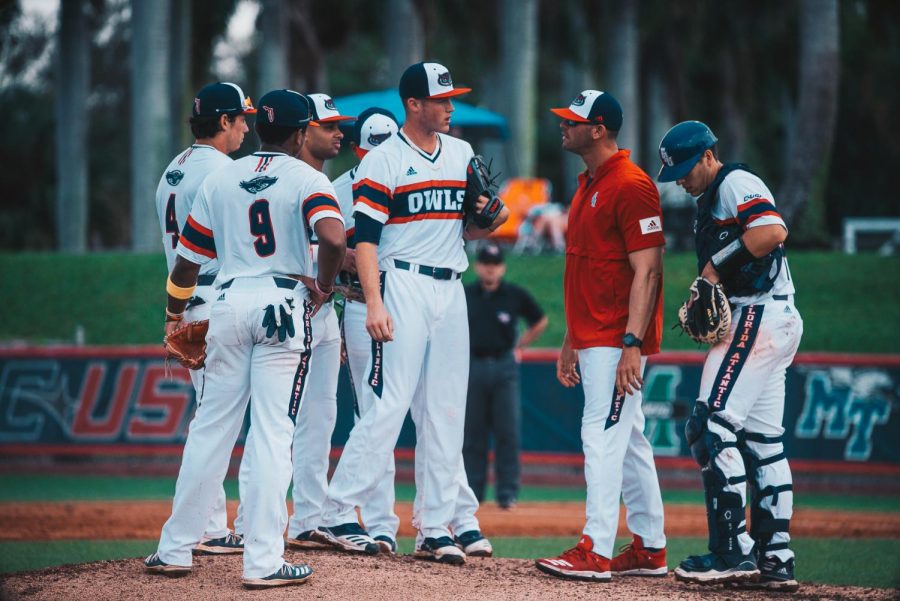 The infielders gather for a mound visit in the middle of an FAU baseball game. Photo by Alex Liscio.

The FAU Baseball team is finally gearing up to start their season after a long offseason due to COVID-19 canceling their 2020 season on March 12, 2020.

“Not going to the field and the park and not being around the players was an odd thing,” head coach John McCormack said. “But I’ve done it for so long that it was really odd at times and other times it feels like a normal offseason.”

Throughout the offseason, their goals stayed the same: prepare for next season and get ready to play.

“It was a little bit different, it’s almost been a year since we stepped on the field and played another opponent and just getting ready for it, it’s kind of similar, but it is a little different,” junior outfielder Jackson Wenstrom said. “Obviously, we’re still doing the same things in our intersquads and the practices. The wait is just a longer wait and a lot of us just really can’t wait to start playing again.”

Wenstrom looks to be an important part of FAU’s roster. He had the third highest batting average on the team with a .286 last season, adding nine RBI and two home runs.

The Owls, who finished last season with a 10-6 record, are primed to compete for the C-USA title yet again, as they are ranked first in the C-USA East division in the conference’s preseason poll.

Sophomore pitcher Javi Rivera was a key addition to the Owls’ roster. He transferred from Indian River State College after posting a 3.82 ERA and a 3-3 record, which was good enough for Second Team All-Conference honors.

Rivera looks forward to competing with the best at a team ranked as high as the Owls.

“This program has a tradition of winning and I’m very thankful to be a part of it,” Rivera said. “I just hope I can do my part and help this team win more.”

Rivera joins the Owls’ weekend rotation for their upcoming series against UCF, as he is set to take the mound on Saturday.

“I mean, there’s obviously some pressure, but I try to use all the tools that I have learned on the diamond to this point.” Rivera said on his slated Saturday start. “I’ve been pitching for a little while now, so I think what I’ve been doing has worked for me and I think it’ll continue to work, even though it’s a higher version of baseball.”

Another one of FAU’s biggest strong suits are its three returning outfielders: senior outfielder Bobby Morgensen, sophomore outfielder Mitchell Hartigan, and Wenstrom. With all three starters returning, there is a sense of chemistry among them.

“It’s great, especially with communication,” Wenstrom said. “We all know each other out there and we’re communicating with each other well and things like that really help.”

Morgenson, who was named to the Preseason All-Conference Team on that same poll, looks to be one of FAU’s impact players this season.

He had a batting average of .274 with 12 RBI and three home runs in 16 games for the Owls last season and looks to build off of it in the 2021 season.

“I would like for him to have that year that we talk about for the next 10 years,” McCormack said “But it’s so nice that this guy has close to 1,000 collegiate at-bats and it’s hard to replace that.”

Hartigan was also named to the Preseason All-Conference Team after a 2020 season that saw him bat .308 with nine RBI and a home run.

He also doubles as a pitcher, as he pitched four innings last season, giving up zero runs, four hits, and one walk while striking out three batters.

“I don’t know how he does it,” Rivera said. “I tried doing it my freshman year and it was tough, so for him to come out of left field and start throwing 90-plus on the mound and then he comes in and hits a home run.”

During an intersquad game, Hartigan hit a grand slam to put his team up in the ninth inning and then came in to close the game.

The real question lies: where is Hartigan most impactful, with the bat or on the mound?

“Mitch the hitter [is more impactful],” McCormack said. “He saved three games last year, he didn’t pitch as a freshman, but we know that he’s a career .300 hitter and everything that he’s done. He plays eight innings of defense and runs the bases, so I think he’s more impactful as a hitter right now.”

The Owls are set to start their season off with a three-game weekend series against the UCF Knights. The series is set to start on Friday, Feb. 19 at 6 p.m. in Orlando. The following two games will be played in Boca Raton on Saturday, Feb. 20 and Sunday, Feb. 21. Each home game will be broadcast on C-USA TV.

Colby Guy is the Editor-In-Chief for the University Press. For information regarding this or other stories, email [email protected] or tweet him @thatguycolbs