FAU students, local representatives, and club leaders expressed their thoughts on today’s raid on the Capitol by Trump supporters. 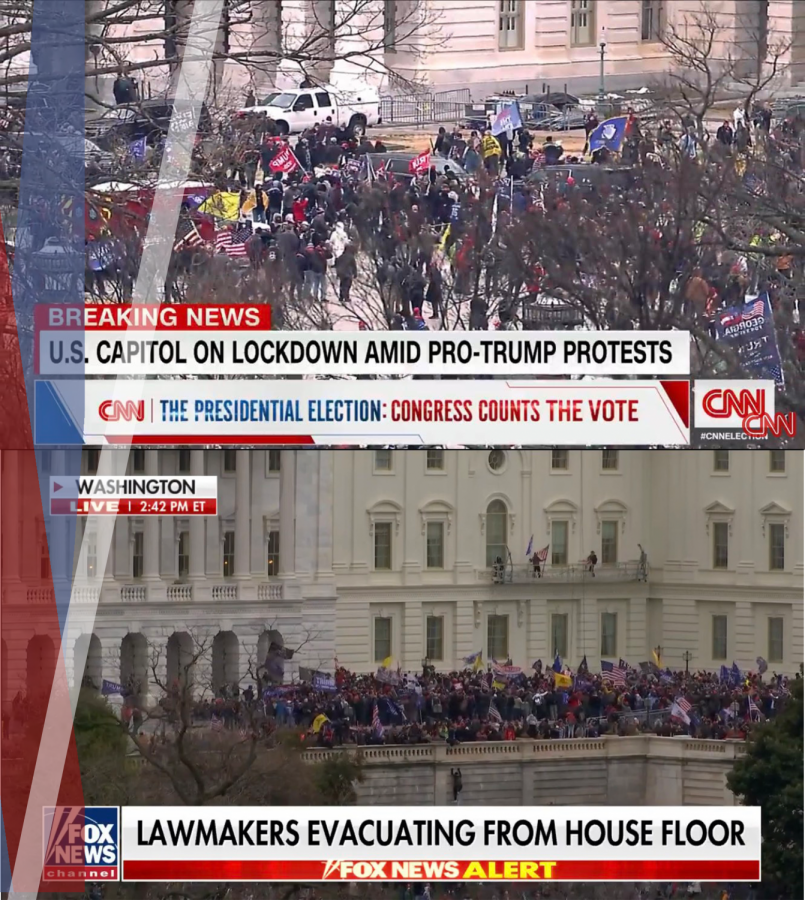 National Media coverage of the US Capitol riots. Screenshots from CNN and Fox News, Collage by Michelle Rodriguez Gonzalez.

One person was shot and is now confirmed dead according to NBC News. Biden took to the podium to deliver a speech urging for the mob to retreat.

“I am beyond appalled that supposed-American patriots, who claim to respect law enforcement and the rule of law, forcibly entered the very building that sacredly harbors our country’s lawmaking,” said Nicoletta Cominio, Owls For All’s vice president of outreach. “The last time an insurrection of similar proportion occurred was when the British invaded, breaking through the Capitol Building’s doors.”

Peter Hull, the FAU vice president for public affairs, released a statement to the UP about FAU’s stance on the matter.

“Florida Atlantic University condemns all forms of violence, discrimination and hatred. What happened today in our nation’s capital was not democratic. FAU supports academic freedom, and the constitutional rule of law that protects it, and encourages the free flow of ideas and dialogue in a safe, inclusive environment,” Hull said.

The president of FAU, John Kelly, tweeted the statement as well.

Congressman Ted Deutch represents the 22nd Congressional District, which includes the university’s Boca Raton campus. He is safe, according to Jason Attermann, a communications and policy advisor for Congressman Deutch.

“Rep. Deutch was not on the House floor,” Attermann said. “He has been sheltering in his office in the Rayburn building.”

From his office, Congressman Deutch tweeted to his followers. “History will remember this dark day as a seditious attack by Americans against America,” he said.

Some students stated the government’s response to the raid further pushed racial inequalities.

“The violence outside the Capitol building must be condemned,” said student body president Celine Persaud. “Conservative or liberal, it is unacceptable and condoning this kind of behavior is an absolute threat to our nation and its leaders.”

Joi Dean, president of the FAU chapter of the National Organization for Women, juxtaposed police responses to today’s events with nationwide protests in recent years around the death of Black citizens at the hands of police.

“When it was Black people and other marginalized communities marching in the streets and trying to protest being killed by their government, they were met with tear gas, curfews, and batons,” Dean said. “People are getting secretly arrested and there was literally chaos but when it’s a bunch of cis straight white men at the capital they are given free range. It’s disgusting.”

“I don’t care who they support, storming the Capitol is not okay, especially after all their talk about BLM needing to be peaceful and being too violent,” she said.

Even fellow Trump supporters condemned what happened at the Capitol building today.

In a statement, the FAU College Republicans said they “condemn any and all acts of violence that have taken place today.”

“We hope that the legal process of certifying electors can resume as soon as possible, and we pray for the heart and future of our great nation,” said vice president Madison Hinz.

“Those storming the Capitol need to stop NOW. The Constitution protects peaceful protest, but violence—from Left or Right— is ALWAYS wrong,” Cruz said in a tweet.

President Trump repeated his assertion that the results of the election are illegitimate, but encouraged his supporters to head home as well.

“These are the things and events that happen when a sacred landslide election victory is so unceremoniously & viciously stripped away from great patriots who have been badly & unfairly treated for so long. Go home with love & in peace. Remember this day forever!” he said on Twitter.

“President Trump is a danger to American society, and must be removed at once. Anyone who continues to defend this president cannot, and will not be respected,” Cominio said.

This is a developing story and will continue to be updated as new information becomes available.

Kendall Little is the Managing Editor for the University Press. For more information regarding this or other stories, email [email protected] or tweet her @klittlewrites.