“At least 178,000 homes have been submerged and over 5 million people have been affected,” according to their post. “Any donations and 10% of t-shirt sales received to our Venmo will be going to the Pacific Links Foundation.” 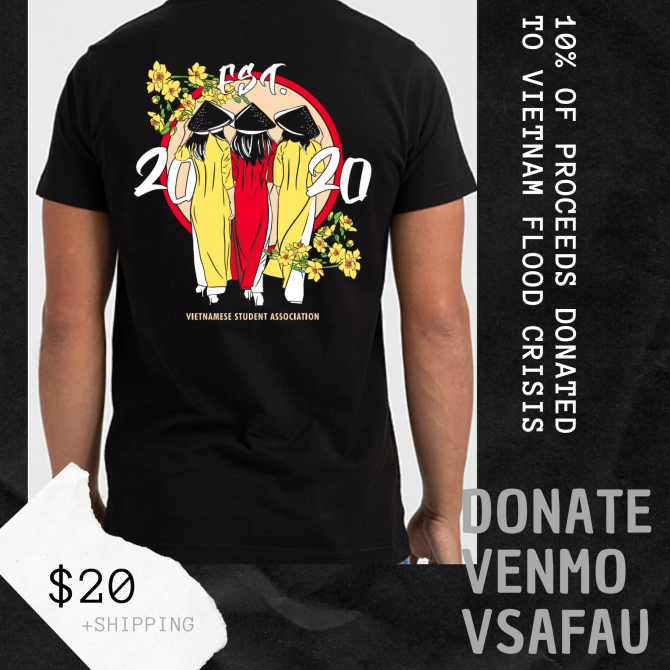 In response to the flood crisis in Vietnam that occurred in October, the Vietnamese Student Association (VSA) is selling t-shirts and collecting donations to help those affected by it.

VSA posted on Instagram detailing how many Vietnamese have had their homes damaged from the flooding and where the donations will be sent to assist them.

“At least 178,000 homes have been submerged and over 5 million people have been affected,” according to their post. “Any donations and 10% of t-shirt sales received to our Venmo will be going to the Pacific Links Foundation.”

Tammy Truong, president of VSA, said the reasons behind starting the donations involved them seeing how much the flooding has affected the Vietnamese.

“Just seeing how much it’s affected everyone kind of got me thinking, as a new organization, we’re planning on selling our t-shirts,” Truong said. “So we might as well put a majority of the proceeds towards going to Vietnam with the floods because, especially with my family, we’ve worked on our own personal donations and stuff to families in Vietnam before.”

VSA events coordinator Andrew Mei explained that this was to help others and to show their friends, family, and followers about things that the media might not be covering; because either it is not big news or it is not related to the stories that they are covering.

Mei states that he has family in Vietnam and is glad to know they are all right, but knows that the flood crisis is “one of the worst flooding they have experienced in decades.”

“Right now there are over 100 reported deaths because of the flood and it could be higher,” Mei said. “We, VSA, as a Vietnamese organization will try our best to help as much as we can.”

According to Truong, most of the donations they receive will be through Venmo, and there will be additional ways to donate if it is needed.

“Those who don’t have Venmo can message us to donate in other means, such as cash if we were to safely meet,” Truong said. “On top of the shirts, we’re just accepting donations as a whole.”

Truong explained why the Pacific Links Foundation will be the one receiving the donations as she sees how much they are doing to help people in Vietnam.

“On their site, they stated that all the donations that go towards this flood crisis, they’re going to match it as well,” Truong said. “This is a good incentive for us to donate to this specific foundation.”

According to Truong, there is no hard deadline, as she believes people can continue to donate and order t-shirts until then.

“As long as the Pacific links foundation is still accepting donations, we’re gonna still keep donating to them as they come in,” Truong affirms.

Mei describes Vietnam as a second world country, saying that it is developed, but it is “developing very slowly.”

“With this slow development, something as harsh as a flood can further slow down the development of Vietnam as a country or it might even stop it for a little bit,” Mei said. “With this said, any amount of money that is donated to help with this crisis will be used in helping a second world country get back on their feet.”

Truong sees how South Florida has a significant Vietnamese community as she wants to make sure that the VSA starts making an impact with that in mind.

“A lot of our international students at FAU are from Vietnam and due to COVID, they can’t go home and they’re seeing all this crisis happening as it’s kind of hard for them to go home and help their families,” Truong states. “This is another way for them to be able to donate and also feel like they’re making an impact in helping their family and the communities they’re from.”