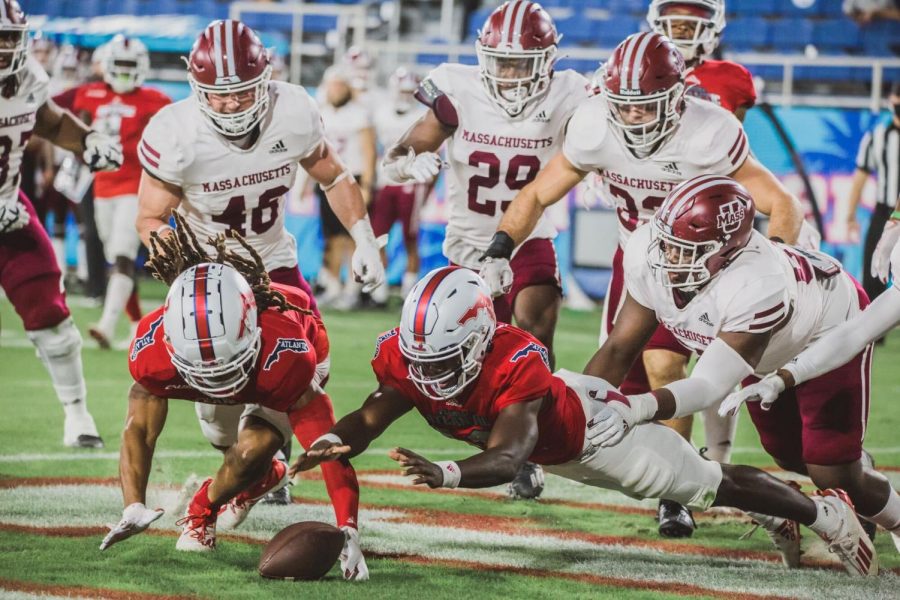 FAU looks to claim their sixth win of the season against Georgia Southern. Photo by Alex Liscio.

FAU (5-1, 4-1 C-USA) will play its second non-conference game of the season today against Georgia Southern (6-4). This will be the first-ever matchup between the two programs.

The game was originally scheduled to be played on Sept. 19, but was postponed due to COVID-19 issues with the FAU football team.

The University Press Sports Staff is back again with their predictions after going 4-0 in FAU’s win over UMass. Once again, no one guessed the correct score. This week, Features Editor Colby Guy will be the guest picker.

Outside of the Marshall game, this will be FAU’s toughest contest of the season. Georgia Southern’s strength is its run defense which is allowing 103.9 yards per game. FAU’s strength on offense is its rushing attack averaging 197.5 yards per game.

There is some uncertainty surrounding the health of the Eagles’ quarterback Shai Werts, who is dealing with a right shoulder injury and is day to day. If Werts is unable to go, sophomore Justin Tomlin will start in his place.

The FAU defense should be able to have its way with the Georgia Southern offense after it fired its offensive coordinator Bob DeBesse last week.

The FAU defense will be the difference in this game. Quarterback Javion Posey and the Owls offense will do just enough to be able to walk away from Statesboro with a win. Which is something a non-conference opponent hasn’t done since 2006 against Georgia Southern.

For both teams, this game will be like looking into a mirror.

Werts is the engine of GSU’s offense. This season, Werts has accounted for 15 total touchdowns with eight of them being rushing touchdowns. He also leads the team with 649 rushing yards.

If FAU were to neutralize Werts, GSU has a strong stable of running backs in J.D. King, Logan Wright, Wesley Kennedy III, and Gerald Green — all of whom average at least 6.8 yards per carry.

Florida Atlantic will lean on Posey and running backs Malcolm Davidson and James Charles to produce most of the offense. Those three have combined for 854 rushing yards and seven rushing touchdowns this season.

FAU will get heavy pressure on Werts and force multiple turnovers. FAU’s offense will be run-heavy but expect receivers TJ Chase and Jordan Merrell to have a big day.

FAU looks to extend its winning streak to five on Saturday, but its defense needs to perform well for that to happen.

The Eagles’ offense will struggle against a talented FAU defense that allows 11.2 points per game. Especially with an interim offensive coordinator and questions surrounding Werts’ status.

If Werts does play, the Owls will need to contain him, as he is a dual-threat quarterback and leads Georgia Southern in rushing. Werts has 131 carries for 649 yards and eight rushing touchdowns this season.

For the Owl’s offense to get going, Posey will need to take command and perform similar to his game against UMass. He completed 13 passes for over 200 yards and had 19 rushes for 90 yards and a touchdown.

Saturday’s game will be a quarterback duel and will result in a close score. FAU will ultimately get the win though, as it will be difficult for Georgia Southern’s offense to keep up with an interim offensive coordinator.

FAU’s defense is on a hot streak, but they’ll have a much tougher task to face. They have one of the best dual-threat quarterbacks in the nation on the other side of the field, if he’s able to play.

Werts is slated as day-to-day with a shoulder injury, so FAU could catch a break if he is out.

If Werts is out, they will see Tomlin, who has thrown for 68 yards, two interceptions, and no touchdowns on 67% passing. If Werts plays, the Owls will have a challenge on their hands.

Werts, who is second in the nation in rushing yards for a quarterback with 649, will give the Owls defense some problems. But if FAU can stop the ground game, they should be able to win.

Werts hasn’t been able to achieve much through the air, throwing for just 936 yards on 60.3% passing while throwing just seven touchdown passes with six interceptions.

If the Owls can force him to throw, they should be able to put the game into the hands of their offense.

This is the same offense that showed major red flags against a horrid UMass team, so if Werts plays, the Owls might be in trouble. If Tomlin plays, then this should be a very winnable game for FAU.