The last time FAU and Memphis went against each other was in the New Orleans Bowl, where FAU won its first bowl title winning 44-27. 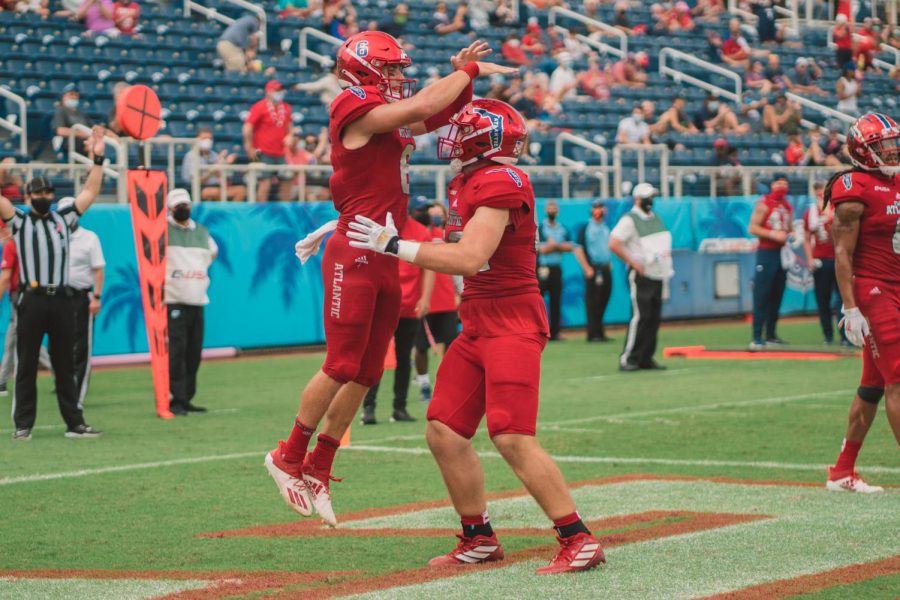 FAU football players celebrate a touchdown in their Oct. 31 win against UTSA. Photo by Alex Liscio.

After losing the last two games of the regular season, Head coach Willie Taggart and his team will look to end the year by giving FAU its fifth bowl title in program history. FAU has yet to lose a bowl game in school history.

The lone time FAU and Memphis went against each other was in the 2007 New Orleans Bowl, where FAU won its first bowl title 44-27.

The University Press Sports Staff is back again with their last predictions for 2020. This week, Editor-In-Chief Colby Guy will be the guest picker.

After ending their season on a disappointing note, the Owls will look to end the year on a high note by winning the Montgomery Bowl against Memphis.

FAU’s defense will have its work cut out for them when they face Memphis’s offense.

Limiting the chances Memphis’s redshirt senior quarterback Brady White, who finished the season with 232-386 passing and threw for 3096 yards, 28 touchdowns, and nine interceptions, should be the main focus for the Owls defense.

Another Memphis player FAU should watch out for is redshirt junior wide receiver Calvin Austin III, who had 60 receptions, leading to 1025 yards and 10 touchdowns.

For the offense, FAU needs to come out with an established game plan that will allow them to keep up with Memphis. Whether they have redshirt junior Nick Tronti or redshirt freshman Javion Posey starting at quarterback, keeping the offense consistent will be crucial to FAU’s chances of winning.

Barring any turn of events, FAU will need to be scrappy all game to have a chance to remain undefeated in bowl games.

Memphis’ offensive approach starts and ends with its quarterback. White has been phenomenal this season throwing for 3,096 yards, 28 touchdowns, and nine interceptions.

Wide receivers Austin III and redshirt freshman Tahj Washington have accounted for a combined 1,663 yards and 16 touchdowns while redshirt senior tight end Sean Dykes recorded 581 yards and seven touchdowns on the season for the Tigers.

FAU’s defense has been great all season, but they fell flat the last two games of the regular season, giving up 20 points to Georgia Southern and 45 points to Southern Mississippi.

The Owls should be able to nullify Memphis’ run game but with very little consistent offense to speak of, they will have trouble keeping up with Memphis’ potent pass attack and solid defense.

FAU dropped its last two games of the season. Unless the Owls play at the top of their game, they will lose on Wednesday.

The Owls will need to rely heavily on their defense to keep the score close, but that will be challenging. Memphis is scoring over 30 points per game.

This will be a tough test for the Owls, as the Tigers are averaging over 450 yards per game. The Owls will need to shut down the passing game quickly, as White has over 3000 yards this season.

The offense will look to establish the passing game early, whether it be Posey or Tronti. Memphis allows over 300 passing yards per game.

Senior wide receiver TJ Chase needs to get involved early, as he leads the Owls in receiving yards. Chase has 21 catches for 328 yards and one touchdown this season.

In its final game of the regular season against Southern Miss, FAU allowed a 2-7 Golden Eagles squad to score 45 points led by its third string quarterback and third different head coach in the 2020 season.

If the Owls are going to keep their perfect bowl record intact against Memphis and White, the FAU defense will have to perform better than they did against Southern Miss.

White has been at Memphis since 2014 and has a lot of experience. He led the Tigers to a New Year’s Six (NY6) bowl game last season against Penn State after finishing the regular season with a 12-1 record and an American Athletic Conference (AAC) championship.

The Owls have yet to face a quarterback as talented as White. FAU can win this game, but they will need the offense to play like it did against Southern Miss. Against the Golden Eagles, FAU scored 31 points, its highest total of the season.

Look for Tronti to get the start at quarterback for the owls, but don’t be surprised to see Posey take some snaps as well to keep the Memphis defense on its heels.

FAU’s defense will be up to the task in the first half of the game, but the lack of an explosive offense will keep the Owls just out of reach of the Tigers and White in this one.

After dropping their last two games of the season, the Owls will be coming into this game with a chip on their shoulder, and I think we will see the team we saw earlier this season, with the Owls taking the victory.

FAU was one of the best defensive teams in the nation in 2020, finishing ninth in the FBS, averaging 16.5 points against per game.

Look for redshirt senior linebacker Leighton McCarthy, who ranked fourth in the nation in sacks, to cause chaos in the backfield and disrupt Memphis’ passing game.

The FAU defense has the playmakers to keep the Tigers at bay, and as long as the offense can follow suit, the Owls can win this game.

If the Owls can establish the run and get Tronti going, they should be able to help their defense out and pull off the upset against Memphis.