Karlis Silins scored a team-high 16 points in the loss to Stetson. 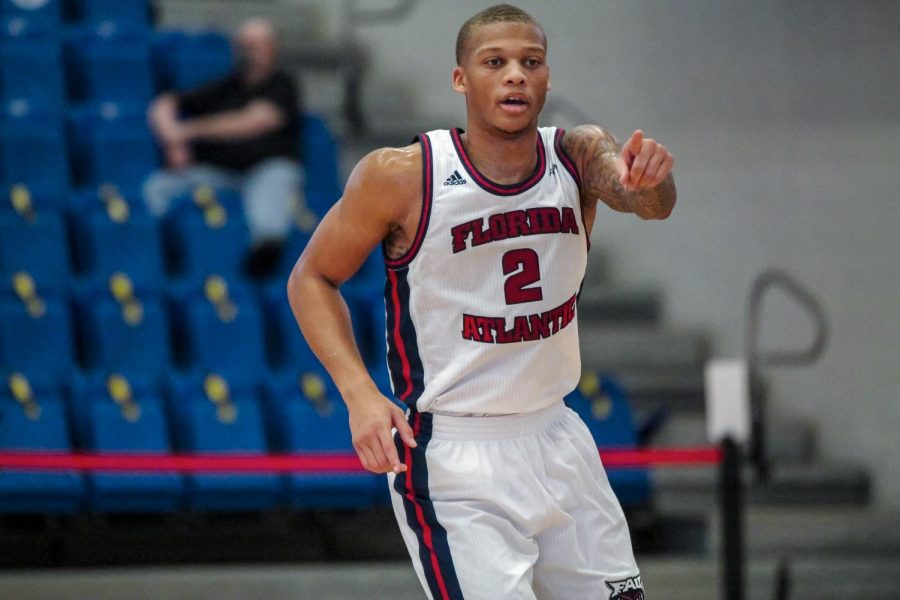 The FAU Men’s basketball team (4-3) had their four-game winning streak snapped at the hands of the Stetson Hatters (1-4) by a score of 78-69.

The Owls struggled with perimeter shooting, making 3-18 of their three-point shots. Stetson outmatched FAU from the three-point line, hitting 12 of their 24 shots from deep.

Stetson was the first team to strike. They started the game scoring 10 unanswered points in the first two minutes of the game until sophomore guard Kenan Blackshear made a bank-in jump shot to put FAU on the scoreboard.

Perimeter defense was the main issue for the Owls in the first half. They conceded eight three-pointers, which involved many open shots to Stetson’s benefit.

Despite shooting 12.5 percent from three and going down as much as 13 in the first half, the Owls fought back by forcing nine turnovers, which allowed them to cut the deficit to nine, ending the half down 39-30.

The second half was an improvement offensively for the Owls. After shooting 34.5 percent in the first half, they were 18-34 on 52.9 percent efficiency in the second.

The Owls kept themselves in the game, getting as close as they could to closing the deficit by getting it down to three 5:05 into the half.

Even though the game remained competitive, Stetson held off FAU’s advances by continuing to find as many three-point shots as they could. It became the deciding factor in Stetson’s victory over the Owls.

Junior forward Karlis Silins was FAU’s top performer against Stetson. He logged in a team-high 16 points and four rebounds on 6-8 shooting. Other contributors were sophomore guard Bryan Greenlee, who had 13 points, six rebounds, four assists, and three steals, and senior guard Everett Winchester, who got nine points, three assists, and three steals.

Forcing turnovers was the top highlight for FAU. They forced 17 turnovers on Stetson while allowing only six of their own turnovers throughout the whole game.

Stetson’s best player in this game was sophomore guard Rob Perry. He put up a game-high 19 points, eight rebounds, and four assists to lead the Hatters to victory.

The Owls will continue on the road when they visit the Florida Gators in Gainesville, Florida on Saturday, Dec. 19. The game will be broadcast on SEC Network at noon.