The Owls walk away with their first home win of the season. 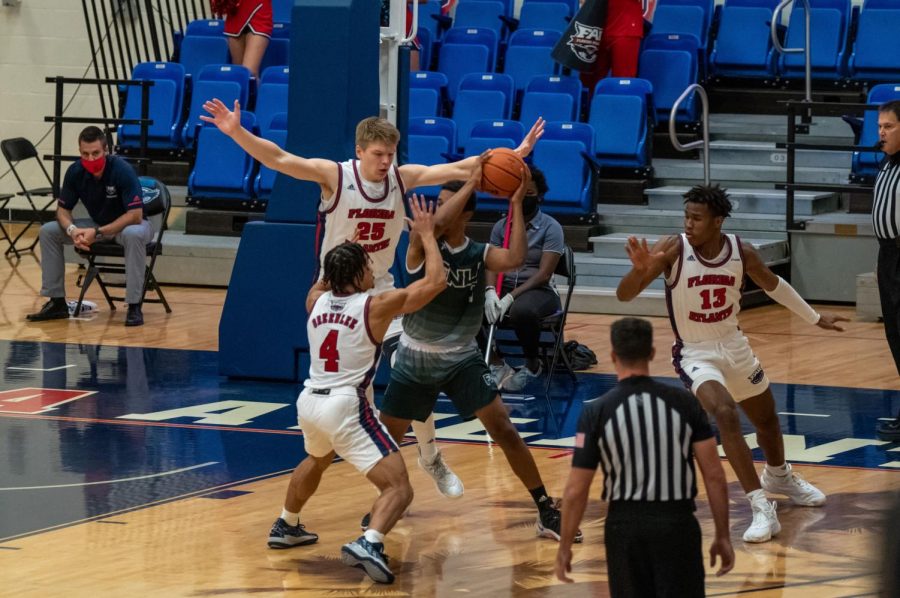 Sophomore B.J. Greenlee and junior Karlis Silins double team a Florida National player as he looks for a green shirt to pass the ball to. Photo by Joseph Barak.

Making history last night, the Owls came out on top against Florida National University as they scored the most points in FAU basketball history with a final score of 128-64.

The Owls broke the school’s previous record of most points scored, which was 111 in 1998 against Palm Beach Atlantic.

“The unselfishness in us playing with an edge and playing together. We really try to analyze ourselves and focus on what we need to improve on immediately to get better,” head coach Dusty May said.

Senior forward Jailyn Ingram led FAU with 23 points in the first half and junior guard Michael Forrest, who shot 83 percent from the field in the first half, added another 14 points. Not only did the two Owls have some of the highest field goal percentages, but they also ranked high in three-point field goals.

Forrest played well in all aspects of the game with his swift passing and three-point shots averaging 80 percent from the three-point line, alongside his teammate Ingram.

Practicing his three-point shots during practice showed on the court as Ingram ended the game with the team’s most points at 26 and shooting 75 percent from the field.

“He’s [Ingram] worked on his body, he’s lived in the training room, he’s done all the things necessary to get himself ready to play and he’s been incredible in practice this week,” May said. “And there’s a direct correlation to value in practice and the way you play in a game.”

Sophomore guard B.J. Greenlee played his role precisely as he knew exactly how to feed his teammates the ball to lock in points on the board for their team.

“He [Greenlee] was responsible for a lot of the plays where he created the offense and then another guy just had to make a touch pass– he got the assist– but B.J. was the one to set it all off and create it,” May said. “Being a small fast compact guard, like a running back, he’s able to get to where he needs to on the floor.”

FNU struggled in the first half scoring just 31points. In total they [FNU] had seven assists throughout the entire game.

Despite their loss, key player for the Conquistadors, guard Jeffrey Hernandez put up a double-double for UNF with an end game total of 25 points and 11 rebounds.

The Owls led in the highest number of team personal fouls with 20, which could be a problem in a close game later in the season.

Freshman Alijah Martin fulfilled his role as one of the Owls guards, completing the game with 21 points, shooting 8-15 from the field, and leading the team in most three-point shots attempted at 12.

“I try to stay on him [Martin] day in and day out and take advantage of each rep because later in the season we’re going to need those shots to help the team out a lot,” Ingram said.

The Owls will head on the road as they play against North Florida in Jacksonville on Dec. 7 at 7 p.m. The game will be broadcasted on ESPN+.