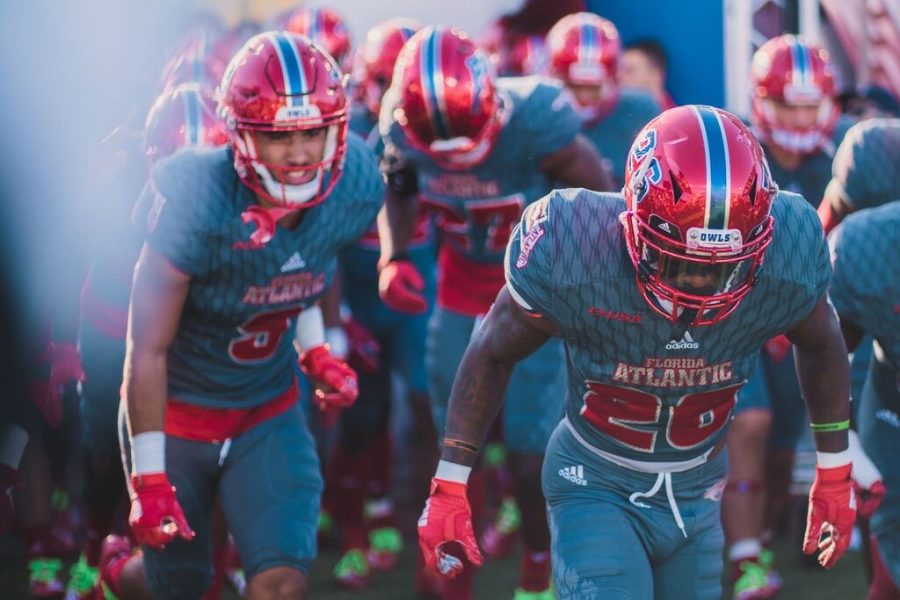 The University Press Sports Staff predicts that FAU will win against WKU due to another dominant defensive performance. Photo by Alex Liscio.

The University Press Sports Staff is back again with their predictions after going 4-0 in FAU’s week three win over UTSA. Once again, no one guessed the correct score last week. This week, Features Editor Colby Guy will be the guest picker.

Here are the predictions from the University Press:

FAU continues to get dominant play from its defense. The front seven has continually gotten pressure on the opposing team’s quarterbacks all season, with 13 sacks in three games. The defense also played great against two of the better running backs in C-USA, Marshall’s Brenden Knox (25 carries, 101 yards) and Sincere McCormick (16 carries, 54 yards).

The Owls should have no problems stopping WKU’s struggling offense. The Hilltoppers are averaging 16.5 points per game and have struggled to find much consistency in the passing or running game so far this season.

While the FAU offense hasn’t been lighting up the scoreboard either this season, they have shown steady progress each week. Quarterback Nick Tronti continues not to turn the ball over, throwing just one interception on the season and zero fumbles.

Look for the Owls to once again rely on the running game and their strong defense to put this one away early.

For WKU, their best chance for a victory on Saturday is running the football. Running back Gaej Walker is someone to watch for as he has rushed for 163 yards in the last two games. Quarterback Tyrrell Pigrome is a dual -threat with 738 yards passing and 246 yards rushing on the season.

Last week, FAU’s defense held UTSA to three points and 230 yards of offense while stifling a very dangerous running back in McCormick. FAU will force WKU to beat them through the air. That’s a tall order for a team that has only completed 56.5% of their passes.

For FAU, they will feast on WKU’s porous defense. This season, the Hilltoppers are allowing 29.7 points and 375.6 yards per game. The main point of concern for WKU is their run defense. They are giving up 4.7 yards per rushing attempt and 185.7 rushing yards per game.

While the passing attack has been lackluster for the Owls, running back Malcolm Davidson has been a bright spot. He leads the team with 195 yards rushing and a touchdown on 7.5 yards per rushing attempt.

Expect FAU to dominate the time of possession with Davidson as the focal point of their offensive gameplan and the defense creating severala number of turnovers.

Western Kentucky will look to bounce back after being blown out 41-10 by No. 11 BYU last week. The Hilltoppers will look to keep the game within one possession, as both of their wins were by three points.

FAU does not have as much experience as Western Kentucky this season. The Owls have played three games and the Hilltoppers have played seven.

The Owls were in a rhythm last week against UTSA. Both sides of the ball were playing efficiently. The offense will look to Tronti to throw for over 100 yards and a touchdown in back-to-back weeks. They will need Davidson to have another 100-yard rushing game too.

FAU needs to score quickly on Saturday if they want to beat Taggart’s former program. Last week they were able to gain a ten-point lead in the first quarter.

Taggart will want to be aggressive to get a win against his former program. The offense will be explosive, and the defense will not allow any points. FAU will get their first shutout this season on Saturday.

After a convincing 24-3 victory over UTSA, the FAU Owls should have little to no issues against the 2-5 Western Kentucky Hilltoppers.

FAU’s defense has been solid all season, allowing no more than 20 points throughout this season, with only No. 16 Marshall reaching the 20 mark, so they should be able to keep the Western Kentucky offense at bay.

With FAU’s rushing offense being its main feature, as 196 of FAU’s 332 total yards last week against UTSA came on the ground, this game is looking to be a low scoring affair that FAU will be able to win easily.

Davidson should be a player to watch during Saturday’s game, as he totaled 115 rushing yards on 14 carries in last week’s win over UTSA.