Print: Know Before You Go

Before you head to your nearest polling location, here are the candidates on your local ballot. 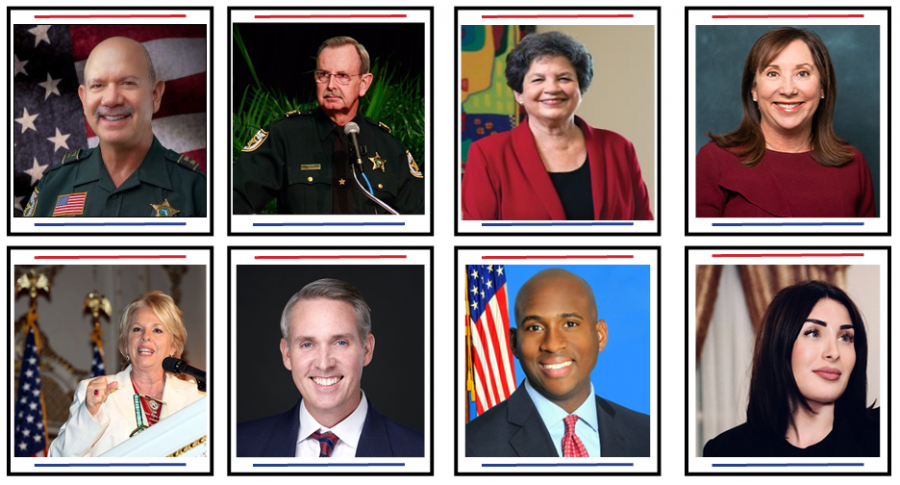 Editor’s note: This story is in the UP’s latest issue that can be found physically on campus and digitally through our Issuu page.

The 2020 Election is right around the corner, and on Nov. 3, citizens 18 and older will be heading to the polls to vote. Before you go exercise your civic duty, here is a list of Palm Beach County office candidates, and some of their platforms. All the information listed below is from the candidate’s website.

Laura Loomer (R)
About: Laura Loomer identifies herself as a “Jewish Conservative investigative journalist” and activist who worked for Project Veritas from 2015-2017. Loomer is self-described as, “continuing to fight for free speech and First Amendment Rights for all Americans.” She’s mostly known for her Guerilla-style journalism and conducts ambush interviews on a livestream, and is banned from Twitter, Facebook and Uber for offensive language.

Supports the Second Amendment
Advocates for breaking up big tech

Lois Frankel (D)
About: Lois Frankel has been representing the 21st District since 2012. While in office, Frankel served on the House Transportation and Infrastructure and Foreign Affairs Committees and the Appropriations Committee.

A supporter of women’s reproductive rights and Roe vs. Wade
Advocates for the increasing of funds for all public schools, special education, and after school programs
Supports the rejoining of the Paris Agreement

Charleston Malkemus (Independent)
About: Charleston Malkemus is a former member of the United States Marines, who worked with international organizations in Iraq, Jordan, Egypt, Morocco, and South America. Malkemus was also a Multi-time Chief Technology Office, who has recruited and led high performing engineering teams to build scalable applications.

Stances (according to Ballotpedia):

Advocating for school choice and funding of school choice scholarships
Increasing funding to local mental health agencies
Working with law enforcement, task forces, and families to see that those who are responsible for bringing drugs into the county are fully prosecuted.

Lori Berman (D)
About: Lori Berman has been serving as the District 31 state Senator since 2018. Before being a Senator, Berman served in the House of Representatives from 2010-2018. Berman has served as the Chairperson of the Palm Beach County Delegation, Chair of the Women’s Caucus, as well as a variety of leadership roles in the Democratic Caucus.

Danielle Madsen (R)
About: Danielle Madsen is a graduate of Texas State University with a B.A. in Mass Communication, with an M.S. from Palm Beach Atlantic University. Madsen is the founder of Tech Up Survivors a non-profit that works to connect computers and phones with survivors of human trafficking to start a new life and achieve their educational goals.

Omari Hardy (D)
About: Omari Hardy is a former civics teacher at Roosevelt Community Middle School who was elected to the Lake Worth Beach City Commission in 2017. Hardy is also the second Vice President of the Palm Beach County Caucus of Black Elected Officials, and currently works at the Housing Center of the Palm Beaches.

Rubin Anderson (Independent)
About: Rubin Anderson is a pastor at First Corinthians Missionary Baptist Church, and holds a B.A. in Ministry. Anderson is involved in several organizations such as the Mothers Against Murders Association and the Concerned Mothers Southside Coalition.

Advocating for school boards being in charge of education
Addressing the root causes of crime and a smart-on-crime approach
Asking other representatives to make the environment green
A transparent record of competent, accountable, and successful economic management

Lauro E. Diaz (R):
About: Lauro E. Diaz has been in law enforcement for 34 years, and is an honorably discharged military veteran. Diaz has over 1,000 hours of training in specialized law enforcement, and active shooter training. Diaz is a three-time Combat Cross Award winner, recognizing “an outstanding act of individual valor involving great personal risk to life or limb when exposed to an armed adversary.”

Continuing the community policing philosophy
Ensuring that tax dollars are responsibly spent on programs that improve the safety and quality of life for all citizens.

Joseph Acosta is the Managing Editor of the FAU University Press. For more information regarding this story, or any other stories, email at [email protected] or tweet him @acosta32_jp.