Sayd Hussain is a Republican candidate who ran in House District 91 and looked to raise the standard needed to serve in public office. 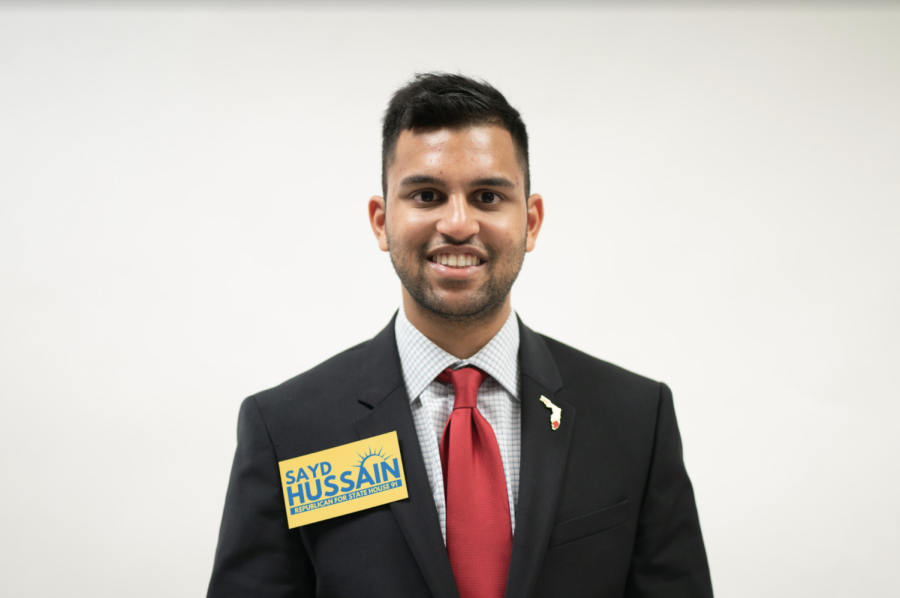 As the U.S. Presidential Election draws to a close, an FAU student has ran for the Florida House of Representatives, and his name is Sayd Hussain.

Hussain is a Republican candidate who ran against Democratic incumbent Emily Slosberg in House District 91 (which covers Boca Raton and part of Palm Beach) and looked to raise the standard needed to serve in public office. He lost to Slosberg, getting around 36 percent of the vote in the district.

“I want to congratulate the incumbent, Emily Slosberg, on her victory and I will pray for her and wish her the best of luck,” Hussain said on Instagram.

Graduating from FAU this year, Hussain served in the Student Government from 2016 to 2018 as a representative and Associate Justice of the Student Court at the Boca Raton campus.

“I was trying to learn the process of government or student government and it is a great stepping stone of how politics kind of works even on a very small level,” Hussain said. “Running for office, it was just a call to action.”

At the age of 22, Hussain knows the issues of his community and wants to show he deserves a place in the legislature to be an advocate for those issues.

“What it means is to say that anybody can be a legislator, no matter how young or old they may be,” Hussain said. “We definitely need somebody up there in Tallahassee to really advocate for young people to take care of the student debt, taking care of scholarships, and making sure FAU has the money to continually improve student lives.”

What gave Hussain the motivation to run was reforming Homeowner Associations (HOAs), which are private associations that oversee and manage neighborhood common areas and amenities, as he saw himself and a lot of people facing abuse and discriminatory behaviors under them.

“I felt that I had to run for office because I believe that I know how to change HOAs as a state legislator,” Hussain said. “After talking to many voters, they would support a campaign behind it.”

One of Hussain’s main priorities is taking care of senior citizens as he wants to make sure they’re comfortable on Social Security and have proper health care since a lot of them live on low Social Security income.

“What I propose is working with the legislature to bring money down and try to find programs so that they live a little bit more comfortably,” Hussain said. “What we have to do is make sure that the seniors have the dignity to live the last years of their lives in comfort and peace.”

As an environmentalist, Hussain serves on the Sustainability Board of Boca Raton as he wants to take care of the issues plaguing the environment.

“I tried to fight for a single-use plastics ban, but that didn’t go through. We were successful in changing herbicides and pesticides, especially by the coastline, to organics,” Hussain said. “This helps, especially with runoff, it would help with algae blooms and all those environmental disasters.”

According to Hussain, being young has its difficulties, especially when it involves politics.

“When I decided I was running for office, the same people who would tell young people, ‘join my campaign, we want young people in office and in our politics,’ they don’t mean ‘run to take my positions, or run to take positions that I might want in the future,’” Hussain said. “This is what any young person would face.”

Hussain believes anyone can get elected to office by having the strength and the courage to get out and knock on those doors.

“It’s so easy to tell people to knock on doors, but the effort is immense, being out every single day in the sun reaching voters, you’re sweating like crazy, but that’s part of the process, you want to win this race, you can’t do it from home,” Hussain said. “I have to work every single day even during the pandemic because winning this race requires effort.”

Jeff Lee, a pastor for FAU’s Reformed University Fellowship (RUF), was excited to see Hussain running for office as he encouraged him to do so.

“Sayd and I talked a fair amount early in his decision-making process. I definitely encouraged him at that time and continue to do so,” Lee said.

Lee describes Hussain as a passionate person with a desire to make an impact.

“Ever since I first met him, it was obvious that he was deeply curious about issues, not afraid to ask questions, yet willing to listen and learn,” Lee said. “As he began his campaign for office, it became clear that those personality traits would naturally converge in an opportunity to serve.”

According to Lee, people often lose sight of the fact that those who serve in office are entrusted by their constituents to do so in a way that represents their needs and concerns.

“With his curious nature, his passion for change, and heart for people, the opportunity to serve as a representative in the state of Florida makes sense,” Lee said regarding Hussain.

Cosgrove was working to spread the word to try to help Hussain’s campaign.

“I was planning on handing out leaflets with Sayd as he campaigned in Boca but did not have the time due to school and work restrictions,” Cosgrove said. “I have contacted other members of College Republicans and spread the word about Sayd on our group email list.”

When Hussain announced his campaign, he had to prove people wrong due to their belief that he had no chance.

“I used to have people from FAU consult and tell me ‘you can never win, Sayd. Why are you wasting your time?’ I say I have to do it because it is my calling,” Hussain said. “I had a lot of ‘no’s when I first started, but now I’m getting a lot of calls saying ‘hey, you’re doing really good.’ I’m really happy with the progress we made on the campaign.”