Staff Predictions: FAU heads to No. 22 Marshall seeking its first ever win against a ranked opponent

FAU owns a 1-6 record all-time against the Thundering Herd. 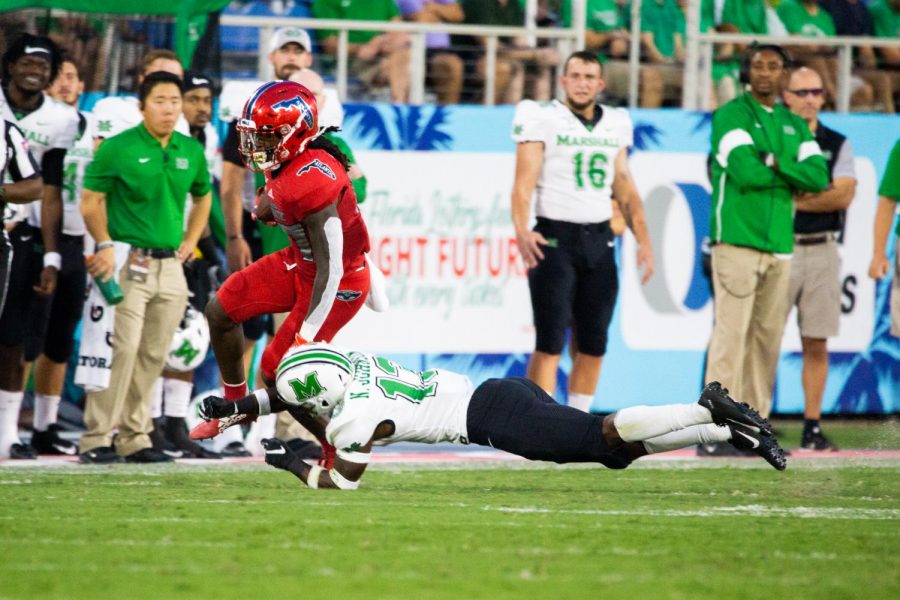 The Owls look to redeem themselves from last season against Marshall as they lost 36-31 to the Thundering Herd. Photo by Alex Liscio.

This will be the first road game for the Owls under new head coach Willie Taggart and it won’t be an easy one, as FAU has never won before at Marshall.

The University Press Sports Staff is back again with their predictions after going 4-0 in FAU’s week one win against Charlotte. Features Editor Colby Guy even guessed the correct score in the contest. This week Managing Editor Joseph Acosta will attempt to keep the perfect record going for the guest picker.

Here are the predictions from the University Press:

FAU was able to win its first game of the season against Charlotte thanks in large part to a strong performance on the defensive side of the ball. Linebacker Leighton McCarthy was a force in the Charlotte backfield totaling 10 tackles, three sacks, and forcing the lone turnover of the game.

Starting quarterback Nick Tronti struggled in the passing game against Charlotte, completing 11-22 passes for just 98 yards, but did throw two touchdowns and added another 94 yards and a touchdown on the ground.

To get a win against Marshall, FAU will have to slow down the reigning Most Valuable Player in C-USA, running back Brenden Knox. Last year against the Owls, Knox rushed for 220 yards and two touchdowns on 23 carries. With all the delays to FAU’s season thus far, I think stopping Knox will be a difficult task for the Owls.

If FAU is going to have a chance in this one, they will need to start fast on offense and punch Marshall in the mouth. Leaning on the running game and not asking Tronti to do too much in the passing game would be a good place to start. I just don’t think the Owls will have the offensive firepower this early in the season to keep up with Marshall. Look for the Herd to pull away in the second half.

With FAU playing in only its second game of the season, its inexperience is still a cause of concern especially against a team like Marshall, who is 4-0 and ranked No. 22 in the nation.

Tronti put up rather pedestrian passing numbers in the game against Charlotte but he did rush for 94 yards on 10 attempts. Running backs James Charles, Larry McCammon III, Malcolm Davidson, and BJ Emmons combined for 119 yards rushing, but the offense needs to produce at a high level against a stout Marshall defense.

FAU played a good game defensively against Charlotte but Marshall’s offensive weapons are plentiful. On the season, Marshall’s offense is scoring 37.3 points per game, and Knox is a big reason for that. Knox has rushed for 455 yards and seven touchdowns this season so expect FAU to key in on him.

Other Marshall players to keep an eye on this Saturday are quarterback Grant Wells, who has passed for 859 yards, six touchdowns, and two interceptions, and wide receiver Broc Thompson who leads the team with 14 catches for 228 yards.

In the end, FAU’s lack of in-game experience and new players will be their downfall on Saturday.

FAU will be disorganized to start the game, as they have only played one game this season. The Owls did win that game against Charlotte 21-17. They need to have a repeat of the third quarter of that game where they scored three touchdowns on three consecutive drives. Tronti was responsible for all three touchdowns, rushing one for 49 yards and throwing for the other two.

The Owls will struggle to start the game, but they will eventually settle in and start scoring. The Owls will not be able to score enough to win the game though, as Marshall’s defense will limit Tronti both in the passing and rushing game.

We get FAU football again!

The Marshall defense is stingy, but there are opportunities for Tronti and the FAU offense to strike down the field. Expect a lot of short passes and an emphasis on the run game early, then when the secondary is lulled in, a deep pass should be open for FAU.

For the Owls to win this game, Tronti will have to throw the ball well. Tronti started slowly in the win against Charlotte, but finished strong, throwing two touchdowns and running for another.

Defensively, Marshall will be one of FAU’s toughest tests. Knox is a workhorse who FAU knows well, he ran for 220 yards against FAU last year. The Thundering Herd also have a quality offensive line, with five seniors anchoring the offensive attack.

I expect FAU to come out fast and physical, after not playing against Southern Miss and having a bye week consecutively. However, with this being FAU’s first road game and the stinginess of the Marshall defense, the Thundering Herd should rumble to a victory.