Student workers at on-campus stores talk about what's different between time before and during the pandemic. 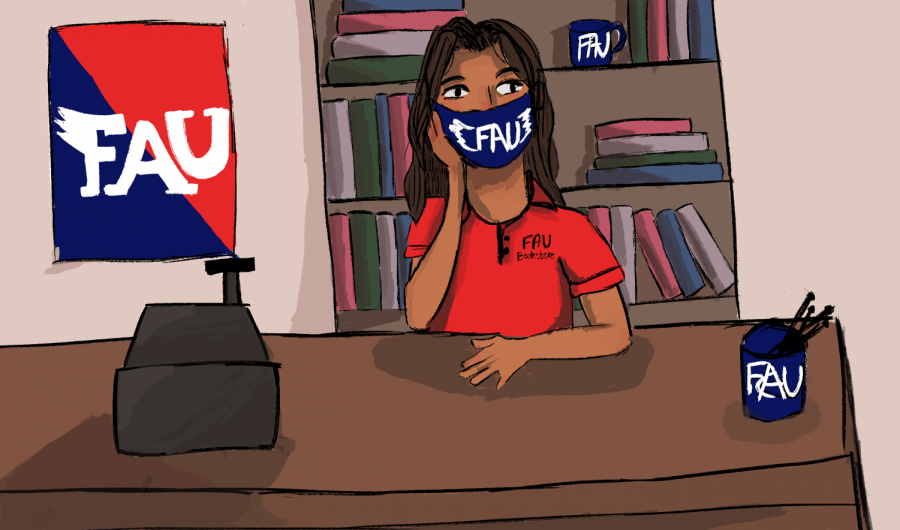 On-campus businesses such as Chick-fil-A, Starbucks, and the school bookstore are having to get used to the decrease in students on-campus. FAU employees who work at these facilities, however, do not seem to be bothered by the change.

“As soon as I walked into the office, it was like nothing changed,” Emily Powell, a sophomore employee at Follett (FAU bookstore) said.

Powell said that her coworkers are her second family. She enjoys going to her job and getting to see all of her friends’ faces ready to get the day’s work started.

Like most businesses, the bookstore has taken up some strict sanitation guidelines. Powell mentioned how she and her coworkers get constant reminders to get tested for COVID and to always wipe down their station, to limit the spreading of germs.

Between a handful of positive cases within the FAU football team and the thought to bring a majority of in-person class back for Spring 2020, COVID-19 has a presence at FAU. Ever since the switch to online classes went into effect in the spring, the campus grounds have been deserted. Businesses have also seen a drop in finance.

Lampart says that the workdays are not difficult, since they don’t get the usual number of people coming in anymore. There was one exception, however: rush week, the first week of the school year where students rush to the bookstore and grab their class materials.

Since they couldn’t have the usual number of staff members due to safety reasons, the team was having to make do with more than half the team members gone.

“There was a lot of running around,” Powell said.

Despite the lack of students on-campus, the on-campus Chick-fil-A seems to still get their fair amount of customers.

Marky Winters, an FAU sophomore and cashier at Chick-fil-A, described the mood as “lame.” “If you’re that scared then why not stay in your dorm?” Winters said.

Winters was very adamant about how scared certain customers were to even order at the establishment.

Winters’ hours have not changed at all, he works his regular part-time hours. It gives him enough time to focus on his studies, as well as to earn a steady paycheck.

“It’s been easy to adapt to the change, it hasn’t impacted me,” Winters said.

The only thing that seemed to affect him, however, was the customers wearing masks. The words in the conversation between employees and the customers are usually repeated multiple times because the masks muffle their voices.

Even with the campus emptier than usual and limited seating areas, FAU’s on-campus businesses are still open and are  welcoming any customers that need their service.

Elliot Rodriguez is a contributing writer for the University Press. For more information regarding this or other stories, email [email protected]