FAU Football: The Owls stay perfect at home with a 24-3 win against UTSA

The Owls scored 10 points in their first two possessions of the game. 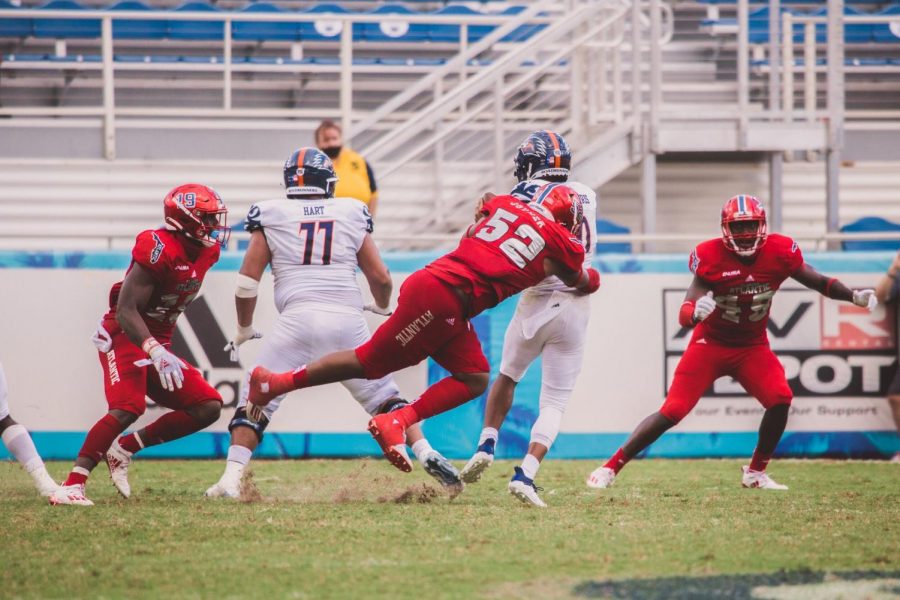 The defense didn’t force any turnovers but did have seven sacks on the day, three alone from redshirt freshman defensive end Jaylen Joyner

“It’s real fun [playing] out there,” Joyner said. “Coach Leavitt lets us cut it loose out there and tells us at the beginning of the game we’re going to get to the quarterback and it’s all going to come.”

FAU started the game fast on the offensive side of the ball, scoring 10 points on its first two possessions of the game. It was the first time this season FAU scored a point in the first quarter.

“We showed some signs of what we can be offensively,” head coach Willie Taggart said. “We just haven’t been consistent for four quarters and we have to continue to work to be that kind of football team.”

FAU held UTSA running back and NCAA rushing leader Sincere McCormick to just 54 yards on 16 carries and no touchdowns. In the seven previous games, McCormick rushed for 867 yards and seven touchdowns. He was averaging 123.8 rushing yards per game heading into the contest.

The Owls received the opening kickoff and went on a 10 play, 58-yard drive which resulted in a 24-yard field goal from redshirt junior kicker Vladimir Rivas to give FAU the early 3-0 lead.

On its next possession, FAU scored a touchdown after going on a 10-play, 80-yard drive that was capped off with a 27-yard pass from quarterback Nick Tronti to wide receiver Aaron Young. The touchdown was Young’s first of the season after transferring to FAU this off-season from Duke University.

“[The touchdown] felt pretty good,” Young said. “I think there’s a lot more touchdowns to come in the future, but it was good to get the first one out of the way.”

UTSA got on the board with a 49-yard field goal after a 15-play, 43-yard drive in the second quarter to cut the FAU lead to seven points.

After trading punts, the FAU offense scored another touchdown with 3:46 left in the second quarter. Tronti led the Owls on a nine-play, 80-yard drive and ran it into the endzone himself for a two-yard score to give FAU a 17-3 lead.

With the first half coming to an end, Joyner sacked UTSA quarterback Frank Harris with the time quickly expiring in the first half. The sack didn’t allow the Roadrunners enough time to run their field goal unit on the field to attempt a kick before the half.

“I just shot through [the gap] and ripped up and was able to get the sack,” Joyner said.

In the second half, Willie Taggart Jr. took snaps at quarterback on consecutive drives coming out of halftime.

“We wanted to get him some reps in there and get him some experience,” Taggart said. “We see the injuries and things that happen, and I don’t want something to happen to Nick [Tronti] and then we don’t have a guy with some experience playing out there.”

The Owls scored their final touchdown late in the fourth quarter after Joyner got his third sack of the game on fourth down to give the ball back to FAU at the 19-yard line. Running back James Charles scored a touchdown five plays later with a short run into the endzone to give FAU a 24-3 lead.

Tronti finished the game 11-19 for 136 passing yards, and one touchdown. He also carried the ball 12 times for 43 yards and another score.

Davidson was the leading rusher for the Owls topping the 100-yard mark for the first time this season. He carried the ball 14 times for 115 yards.

Young led the team in receiving yards with 54 on three catches and had a touchdown. Willie Wright also had three receptions for 16-yards and Chase had two catches for 43-yards.

The offense had its best yardage output of the season with 332 total yards (136 passing and 196 rushing).

FAU gave up 230 total yards to UTSA (126 passing and 104 rushing). The Roadrunners came into the game averaging close to 400 yards per game and scoring 26.9 points per game.

The Owls finished with a team total of seven sacks and 10 tackles for loss. Jordan Helm led the defense in tackles with eight (four solo) and Joyner finished with five total tackles (three sacks).

Next week the Owls will face off against Western Kentucky at FAU Stadium. Kickoff is set for 6:00 p.m. and will be broadcast on the streaming service Stadium.