The Owls scored 21 points in an explosive 3rd quarter. 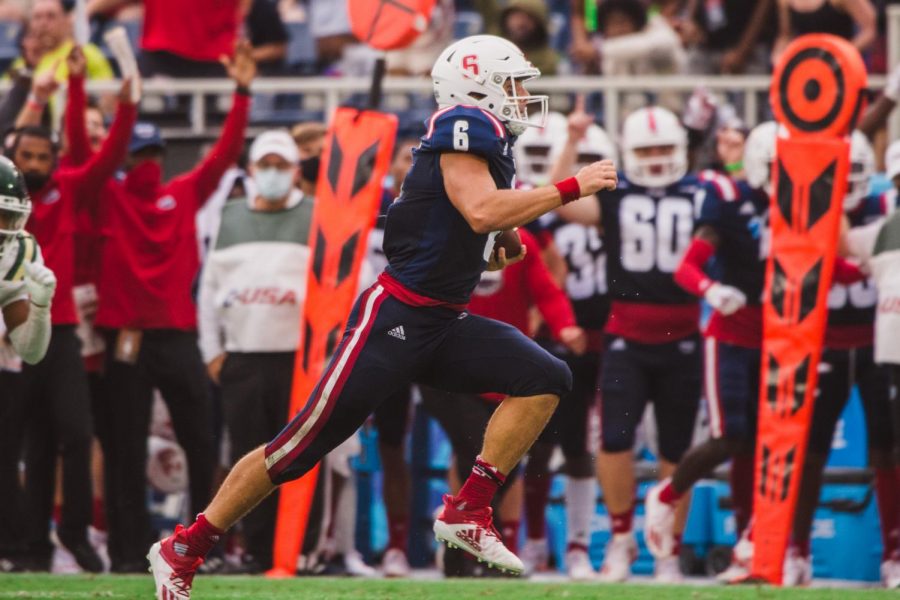 QB Nick Tronti scores a much needed touchdown using his legs for 49 yards. He led the team in rushing yards with 94 yards. Photo by Alex Liscio.

The Owls (1-0) started their season with a 21-17 win against Conference USA foe Charlotte (0-2) for their first season opening win since the 2016 season when they defeated Southern Illinois 38-30.

“It was good to get out there and see where our football team is,” head coach Willie Taggart said. “I was really excited, I’m excited about this football team.”

FAU got off to a slow start offensively led by redshirt junior first-year starting quarterback Nick Tronti under center.

The Charlotte defense was able to hold FAU to just 72 total yards of offense in the first half of the game. Tronti struggled to get anything going whether it was through the air or on the ground.

“I put the first half on me,” quarterback Nick Tronti said. “I wasn’t seeing everything clearly like I should’ve been and should’ve came out a lot sharper.”

Charlotte jumped out to an early 10-0 lead thanks to a 43-yard field goal on its opening drive and followed that up with a 39-yard touchdown pass from quarterback Chris Reynolds to wide receiver Cameron Dollar on its second offensive possession. The 49ers also missed a 48-yard field goal in the second quarter.

The FAU defense was able to keep Charlotte off the board the rest of the first half. FAU allowed Charlotte to rack up 165 total yards in the first half, 104 of those yards came on Charlotte’s first two scoring drives.

“After the first quarter they [the defense] really played well,” Taggart said. “Here we go, we’re down 10 and offense hasn’t done anything. How are you going to respond? You guys can sit here and pout or look adversity in the face and say ‘bring it on’.”

Charlotte received the ball to open the second half. They went on a 10-play, 48-yard drive, but missed a 44-yard field goal.

FAU took over after the missed field goal and scored its first touchdown of the game. Tronti ran it 49-yards for the score to cut the Charlotte lead to 10-7.

The Owls were able to score their second touchdown of the game on their next offensive possession. This time Tronti hit redshirt junior tight end Logan Peterson for the 25-yard score to give FAU a 14-10 lead.

On the ensuing Charlotte possession, FAU linebacker Leighton McCarthy was able to sack Reynolds and forced a fumble giving the Owls the ball back on the 16-yard line.

FAU was able to score quickly after the Charlotte turnover. Tronti found wide receiver TJ Chase in the endzone for a 16-yard touchdown to give the Owls a 21-10 lead.

“He [Chase] almost didn’t get that [touchdown] play, we almost gave it to someone else,” Taggart said. “It was a play we practiced with him all week long and he finally got it in and worked it to perfection.”

Charlotte went on a 10-play, 75-yard drive on its next possession to make the score 21-17. Tre Harbison III scored on a one-yard plunge into the endzone.

FAU and Charlotte exchanged punts on the next two drives. On its final drive of the game in the pouring rain, the Owls were able to run 5:35 off the clock. Charlotte ended up forcing FAU into a 4th and 1 at its own 17-yard line.

Instead of kicking the field goal to attempt to give FAU a seven-point lead, Taggart opted to trust his running game to pick up the one yard, which they were unable to do.

“Part of it was the rain, and part of it was I believe in our guys,” Taggart said. “The way we were running the ball I just felt like we could go and get that first down, unfortunately, we didn’t get it. If I had the chance to do it again, I would’ve done it again.”

Charlotte was able to make things interesting in its final possession of the game. Reynolds completed a 48-yard pass down to the FAU 16-yard line.

On first down, Reynolds’ pass was incomplete. FAU was able to get back to back sacks on the next two plays led by defensive end Jaylen Joyner and sealed the win with a stop on 4th down.

FAU finished the game with 315 total yards. Tronti completed 11-22 passes for 98 yards and two touchdowns and added 94 rushing yards and one touchdown on 10 carries.

“BJ went down after the first play and hurt his ankle,” Taggart said. “Hopefully it’s not that bad. He came back, but it was just bothering him.”

Davidson was FAU’s leading rusher last season with 102 carries for 711 yards and nine touchdowns. He didn’t receive his first carry until the fourth quarter.

“I saw him standing there and I didn’t remember seeing him [Davidson] run the ball,” Taggart said. “I told him [Davidson] to ‘get over here buddy, we need you running the football for us.’ [Davidson] is a good football player and he needs to be out there helping this football team.”

Freshman wide receiver LaJohntay Wester led the team in receptions with three for 13 yards. Chase and Peterson each led the Owls in receiving yards with 25 and both scored a touchdown.

FAU will head out on the road to face Southern Miss. on Oct. 10. Kickoff is scheduled for 4 p.m. and will be broadcast on the streaming service Stadium.