FAU Football: Owls look to open their season with a win against the Georgia Southern Eagles

FAU is in for an uphill battle after missing spring practice with new head coach Willie Taggart and losing 15 starters, including starting quarterback Chris Robison. 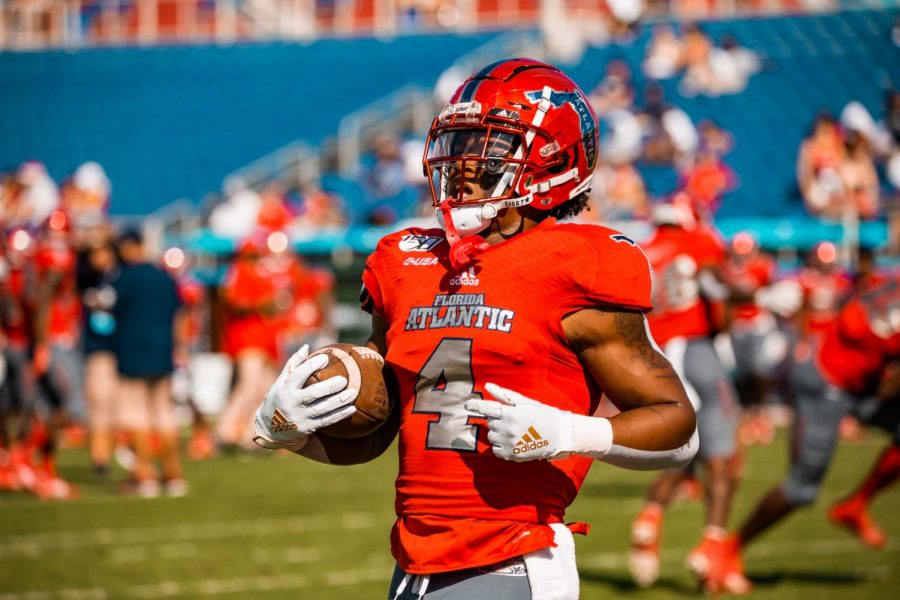 BJ Emmons is on track to have an productive season in his senior season. Photo by Alex Liscio.

The FAU Owls are looking to open up their season with a victory on Saturday, Sept. 19 against the Georgia Southern Eagles (1-0).

The Eagles are coming off of a nail-biting 27-26 victory against Campbell, where they won after a failed two-point conversion attempt and a botched onside kick by the Fighting Camels following a Hajj-Malik Williams touchdown pass to Jalen Kelsey with 15 seconds left.

Georgia Southern is led by their dual-threat quarterback Shai Werts. The Redshirt Senior passed for 799 yards, nine touchdowns, and one interception on 52.76% passing and ran for 733 yards and five touchdowns on 171 carries in the 2019 campaign.

The Eagles run the triple option, in which Werts is either able to scramble it himself or pitch it to one of their running backs, either J.D. King or a combination of Matt LaRoche and Logan Wright.

King in particular is the most dangerous of the three backs, as he ran for 820 yards and eight touchdowns on 185 attempts last season. The senior ran for 74 yards and a touchdown in last week’s game.

The Eagles best running back from last year, Wesley Kennedy III, was out last week as Georgia Southern had 33 players inactive due COVID-19 or other issues. It is unclear if he will play this week against Florida Atlantic. The senior running back ran for 824 yards and 11 touchdowns last year.

FAU is in for an uphill battle after losing 15 starters, including starting quarterback Chris Robison. The loss of spring football practice has also been a challenge for the team, as they had less time to get accustomed to new head coach Willie Taggart.

Redshirt junior Nick Tronti will start for the Owls. Last year, Tronti passed for 180 yards, two touchdowns, and one interception while rushing for 239 yards and two touchdowns on 51 attempts.

Expect Tronti to be effective on the ground in Saturday’s game, as he is very mobile for his 6’2, 210 lb frame.

The Owls will still be effective on the ground, as they have three solid options in senior BJ Emmons, junior Malcolm Davidson, and sophomore Larry McCammon III returning to the field.

The Owls’ passing attack is going to look significantly different with the departures of Harrison Bryant, Deangelo Antoine, and John Raine, as well as losing Redshirt senior John Mitchell to a season-ending knee injury.

Senior Willie Wright will also play a bigger role this year after racking up 186 yards and two touchdowns on 20 catches.

On the defensive side of the ball, the Owls lost a large majority of their dominant defense from last season, which led the nation in turnovers with 33, but Redshirt junior linebacker Ahman Ross is due for a breakout year.

Ross made the move from safety to linebacker following the loss of Akileis Leroy and could strive in that position, as he put up 2.5 tackles for loss despite being at the safety position. That’s a number that should go up given the move to linebacker.

With many new faces looking to step up for the Owls, this is a chance for them to prove their worth as they set out to defend their 2019 Conference USA title. The game will broadcast on ESPN at 3:30 p.m. Saturday.

Colby Guy is the Features Editor for the University Press. For information regarding this or other stories, email [email protected] or tweet him @thatguycolbs.