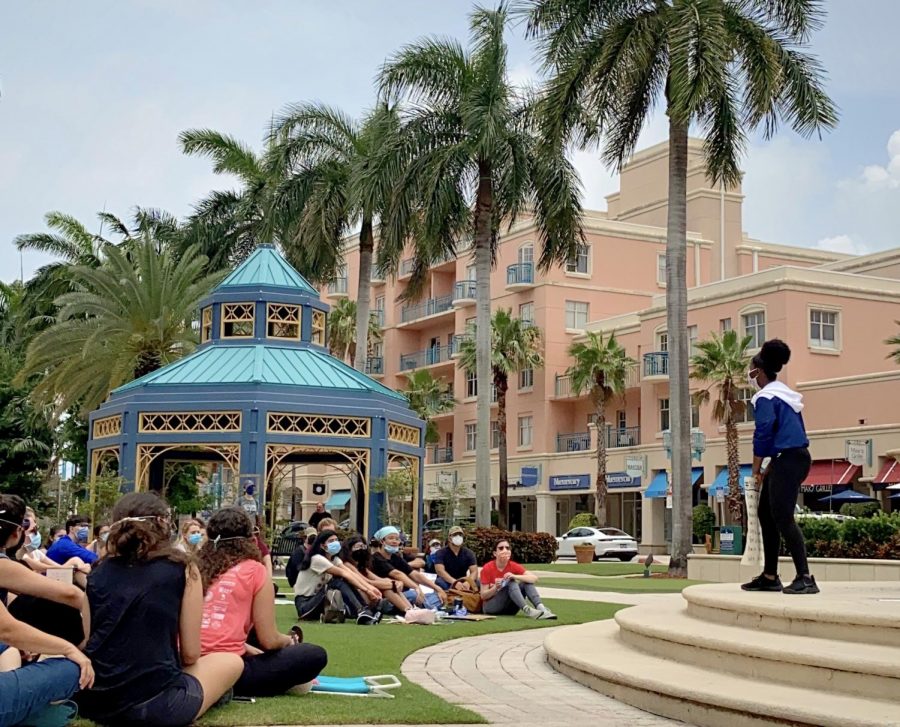 On her day off Monday, FAU senior Sydney Seeley staged a sit-in by herself on a Mizner Park lawn to protest George Floyd’s death. Today, she stood along Federal Highway with over 75 protestors, holding signs in support of the Black Lives Matter movement.

Throughout the week, fellow protestors found the demonstration through social media and word of mouth. In the afternoon, speeding cars filled the busy streets and honked their horns in support to which the protestors cheered and raised a proud fist in the air. In contrast, a few critics shouted at protestors from their car, flipped them off, and even pulled over to argue, to which the protesters repeatedly responded: “Have a nice day.”

“I didn’t even advertise [the protest] Monday…I texted some friends and that was it. And then that night, I made the post and I was like ‘this could be something really big,’” she said.

Seeley has been protesting in Mizner every day since Monday and after seeing the amount of support, she extended the protest to this weekend as well, expecting more people.

While online resources and petitions are gaining popularity, Raphael says she isn’t new to this.

“This isn’t my first time, this is my reality, this is what I go through every day. This is what I’ve known since Trayvon Martin. I was in middle school,” she said.

Destinoble says being on the streets and seeing public support is “most definitely heartwarming” but does her best to move past those against the cause.

“That negativity, I see it on the internet but the fact that I’m seeing it face to face, it does truly hit different,” she said. “It’s really sad that we have ignorant people in the world that don’t educate themselves or even try the least to understand what’s going on and what’s actually happening instead of just being so quick to be negative and showing hate towards others for no reason.”

Raphael recognizes the support of non-black protestors, especially for a city like Boca Raton which has a demographic of 76.5 percent white residents.

“The same way we’re speaking out against people who aren’t saying anything. I think I speak for a lot of people when I say, we also do notice the ones that are doing something,” she said. “Even if it took five seconds for you to make the poster, you still went out of your way to make a poster to be here today to stand in the Florida sun.”

Halfway through the demonstration, a Delivery Dudes driver in Mizner brought out cases of water bottles for the sweat-drenched protestors and said that although he was working he wanted to help out. While in uniform, he stood alongside protestors on the sidewalk and raised a fist in the air in solidarity.

A five-minute drive from FAU, Mizner’s location as the “crown jewel of Boca,” according to Seeley, was strategic as it’s one of the most frequented and upscale areas of the city. With other protests planned in Miami in West Palm, Seeley wanted to organize something accessible.

“I started this sit-in because there was nothing else happening…I figured we could take [Mizner] over peacefully,” she added.

When a protestor begins chanting, Seeley dashed across the street to inform them that something as simple as a chant could excite the crowd too much and she wanted it to remain peaceful.

Even so, police officers sat by in their cars at the plaza entrance with an eye on protestors.

“The police officers have been super welcoming and very supportive and every time that we’re out here they approach and let us know they’re here to help us,” she affirmed.

However, as a white woman, Seeley did not want attention to herself but instead offered the platform to the black community, like FAU alum Alyssa Alvarez who spoke to the crowd.

“That’s something I’ve had to be really careful within this whole movement because I can’t ever even pretend to know the problems of the black community,” she said. “I can never speak for the black community, so what I’ve done is I’ve tried to use the privilege that I have as a white woman to come out here and sit peacefully and occupy space.”

After two hours of demonstrating on the sidewalk, the protestors sat around the plaza’s center fountain for a few final words from Alvarez.

“Black Lives Matter should not be a partisan issue,” she begins, “when our president is pushing our local and state government to have military intervention from people who are peacefully protesting, like all of us are here today, is that the liberty we fought for?” she asks.

She goes on to explain how exhausting it is to wake up and witness police brutality and Black American’s pleading for their lives on social media. Adding that, “after nearly 401 years, Black American’s are still begging for basic rights.”

“I don’t know how many of you saw the #georgefloydchallenge going around. But when I see that, when I see people finding entertainment and amusement in people dying,” she pauses, then says “it breaks my heart,” with tears in her eyes. “We need to remind ourselves, what it means, what it is to be human.”