Experiencing COVID-19 in China through the eyes of FAU alumni

FAU alumni share their experiences going through the pandemic in China. 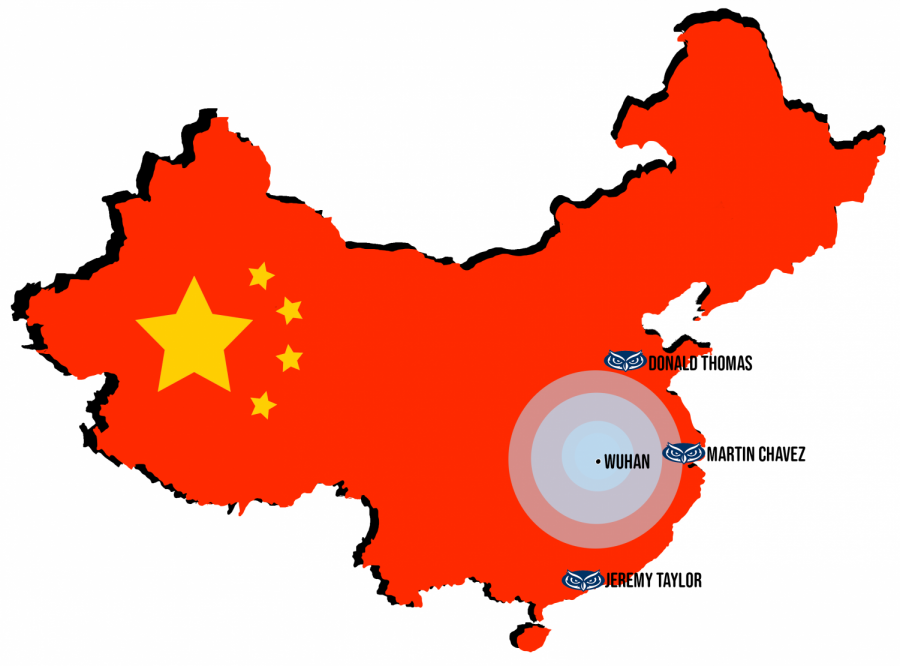 While the COVID-19 pandemic is ongoing, FAU alumni share their experiences at the origin of the virus: China.

China is reporting fewer cases by the day, and alumni living and working in the country note the safety measures and the overall handling of the pandemic is different when comparing the U.S to China.

They all agree that the virus is different from what it was in the beginning, and discuss what must be learned from to prevent future pandemics.

Jeremy Taylor, a 2010 FAU alum noted how the symptoms of the virus back then are not the symptoms that are seen now. He lived in Shenzhen, a city about 680 miles south of Wuhan, and worked as a project manager at Onyx Games, a video game company in China.

“It was mainly a cold, the cough wouldn’t go away, or a runny nose, but it wasn’t anything like the lungs or rashes we are seeing now,” Taylor said.

“At the time, it wasn’t a pandemic because even though everybody in the city was getting sick, everybody was recovering, and there were no reports of people going to hospitals.”

Martin Chavez is a 2002 alum currently living in China and working as a senior director at Colliers International, a real estate company.

“I saw remotely how Wuhan got on lockdown, and then other cities started following not by doing full lockdowns but by increasing tougher measures on traveling within the provinces as back then, it was not an overseas issue; it was a China issue,” Chavez said.

He was in Peru with his family in February and then returned to China.

“When I arrived in Shanghai, it was never on full lockdown, but it was very quiet as everybody just kept to themselves,” Chavez said.

Chavez added that currently, social distancing in China has lessened due to the decline of cases.

“In China right now there is no more social distancing as the crisis appears to be declining with May being the most normal in months,” he said.

For methods of protection, social distancing is unanimous among the alumni.

Donald Thomas, a 2008 alum currently in the U.S, works as a teacher in the Qilu Institute of Technology in China. He emphasized that social distancing is mandatory for everyone.

He stays indoors unless there’s something important that needs to be done. “I do wear the mask and gloves because you just never know,” Taylor said.

Chavez said he stocked up on many items that help him from getting infected. “I stocked up on high-quality masks, gloves, alcohol-based soap, washed my hands often, and avoided close contact with people,” he listed.

The difference in medical preparedness between the U.S and China was noticeable to the alumni.

Chavez noted how people in China became more careful with their safety as the country put Wuhan on lockdown and implemented stricter public safety measures, which to him was much different than the U.S.

“A lot has to do with wearing masks and some people in the West don’t like the idea of wearing a mask,” Chavez said. “It’s not that the mask itself cures the problem; it’s that the mask protects you and others from passing the virus.”

Taylor credits China for how quickly they shut down cities, did multiple testing, and made sure they stop the coronavirus before it really starts.

“Compared to the West, where people still can’t get tests and people who have been tested for the virus have their tests come up inconclusive, that’s where the U.S is falling short,” Taylor said. “We’re lacking supplies, the knowledge, and the means to test and treat people because even our medical facilities are doing the best they can and I give my heart to the people working on the frontlines for this.”

Criticism of China holding back knowledge of the virus from everyone was warranted by Taylor.

“I do criticize the fact that they kept the knowledge a secret and trying to hide it, instead of letting people know earlier that there’s a pandemic spreading so people can stop it sooner,” Taylor said. “They are trying to fix it, but if they do have new information, they should spread it and give it out freely without trying to cover it up so this doesn’t happen again.”

Keeping everyone from getting infected is the task at hand, especially in the U.S. Taylor insists he would tell Americans to be mindful of their neighbors because of the virus.

“It’s spreadable and easy to catch, so even if you’re not showing signs or symptoms, you don’t want to take risks,” Taylor said. “Keep your distance, go out when you have to, and if you’re working and you have to be out there, wear protection, protect yourself first and foremost.”

Chavez found through research that some countries in Asia and Europe, as well as New Zealand, have done a good job controlling the virus.

“I would encourage whoever is more knowledgeable on the medical front to research what those countries have done,” Chavez advises.

Chavez says there has to be a sense of knowledge gained from past pandemics.

“There has to be new protocols of prevention and make people realize this is a wake-up call,” he added.

Thomas said that people have to be willing to do things that make people uncomfortable and keep politics out of it.

“China and the [World Health Organization] have some explaining to do and in my opinion, I think they let a lot of people down,” Thomas said. “That being said, I love China and its people. I have been there for nine years and will return again this fall to teach.”

Taylor pushes the importance that people have to learn from what we’ve experienced with COVID-19.

“If we don’t change the measures of how to implicate medical supplies or testing and another pandemic happens again, it’s going to be worse the second time around,” Taylor said. “For it to get better, there has to be a lesson learned from this time around. If nothing’s learned, nothing’s gained.”