Column: I went to a Black Lives Matter protest

“I think many young people have a false impression that activism requires complete dedication or a future involving it, but the way I see it is that activism should be a part of every young person's life in some way, shape, or form,” said Sheza Ali, one of the protest organizers. 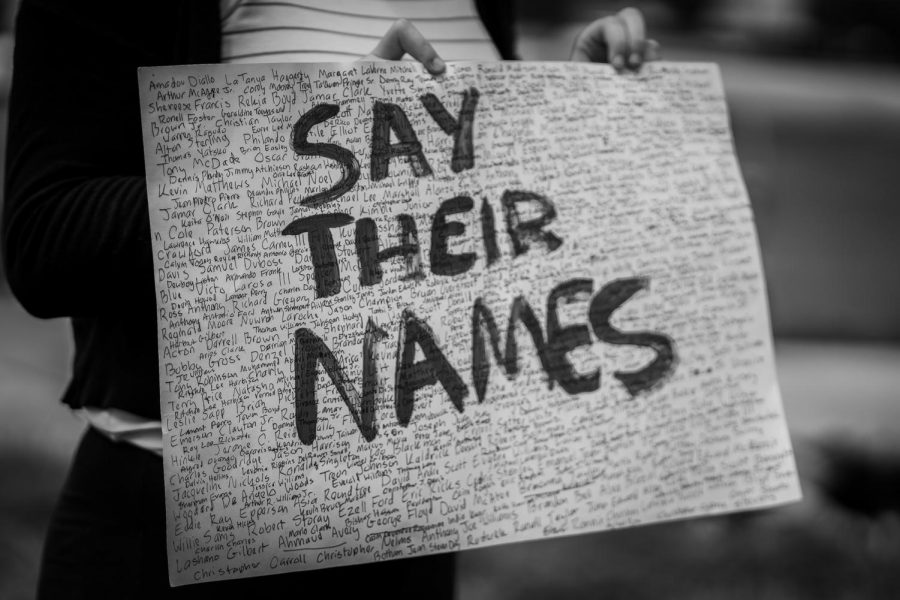 One of the many signs at the peaceful protest on the intersection of Glades and State Road 7 in Boca Raton. Photo by Alex Liscio.

The sound of 200 protestors chanting “Say his name, George Floyd,” “Say her name, Breonna Taylor,” “Hands up, don’t shoot,” echoed on the intersection of Glades and State Road 7 in Boca Raton, last week.

Organized by three local high school students, the name of the protest was a simple question that’s worth more than it seems.

Promoted “For students, by students,” the protest was open to the public to show their support not only for the Black Lives Matter movement but for the countless lives lost due to police brutality and systemic racism.

I made an exception to get out of the house on that day.

The organizers of the protest are all going into their junior year. Katrina Dobinda, one of the organizers who attends FAU High, explained why she thinks a demonstration like this is necessary.

“I feel that while the Black Lives Matter movement and the fight against police brutality was ongoing for many years, the death of George Floyd was a wake-up call,” Dobinda said. “We wanted to demonstrate that as a youth, through unity, we can have a voice, and demand police reform and educate individuals about white privilege and racism in this country.”

Dobinda and I share common thoughts: being heard instead of being silent during this time of societal tension is important.

Sheza Ali, another organizer for the protest who attends West Boca Raton High School, explains the importance of it being promoted for the student population.

“I feel that there are very few things that can even come close to matching the power of unity, especially unity in students,” Ali said. “It’s undeniable that students coming together for a cause such as this makes for a formidable message to the people in positions of power who are failing us. I’m extremely proud of every student who stood with us at the protest, and I really hope to see more student-led protests in the area.”

While the protest was mostly peaceful, some situations became hasty such as when people in a truck with flags in support of President Donald Trump were arguing with the people that attended the protest. Fortunately, this didn’t hamper the way the protestors spoke about their message.

One instance saw an unknown woman in a car who drove past me shouting “Go home.”

The police presence was very minimal as the only officers present were at the Duffy’s Sports Bar and Grill parked outside watching the protest if any extra-curricular events were happening.

However, the sit-in came in with a lot of support, numerous vehicles honking their horns in support of what we’re fighting for.

Antonio Alcima, who also attends West Boca High, wasn’t shocked that the event didn’t turn violent, stating that the media perspective of these protests turning into riots takes away from the message.

“The media has portrayed countless non-peaceful protests In order to convert focus to riots and violence as an attempt to discredit the BLM movement as a whole,” Alcima said. “There have been numerous amounts of successful peaceful protests not only in the country but around the world.”

Alcima mentioned the environment of people standing together under the sweltering sun with their face masks on, stating that while “none of us knew each other personally at the protest, something about it felt like a family.”

Like me, the people who attended are frustrated, especially with those who go to FAU, and you feel connected with them.

For sophomore Stephen Reddy, who just transferred from FIU to FAU in the summer, this is the first protest he’s been to. While he hates the circumstances that brought him there, he’s happy to see the effort people have made in regards to the movement.

“I was glad to see everyone at least making efforts to be cautious and wearing masks and all that, everyone was definitely aware that we have to be careful,” Reddy said. “So I was mostly comfortable with it and glad to be supporting, and I would do it again.”

He also said that while he’s been careful about his health, he said it was needed to come today, show his support while following the normal social distancing guidelines.

“I definitely feel like this was a necessary sacrifice,” Reddy said. “I think there is a deep-rooted systemic problem, and it’s not like we can just pause this sudden nationwide BLM movement until the virus passes. We have to take the chance we have now if we expect to make things better.”

What started as an idea from a Facetime call turned these students into political activists.

“For me, political activism was always a topic that I was interested in,” Dobinda said. “Currently, I am going to attend the Barb Schmidt Fellowship at FAU, where I plan to continue my journey into political activism, I am a co-founder of the FAU High eco-club, as well as the FAU climate strike, and a member of Owls for Bernie [Owls for All].”

To Ali, while she’s not sure of her future in the career of political activism, she believes that everybody has that will to change.

“I think many young people have a false impression that activism requires complete dedication or a future involving it, but the way I see it is that activism should be a part of every young person’s life in some way, shape, or form,” Ali said. “After all, we’re creating a future not only for ourselves to grow up in but for the next generation to live in.”

For Alcima, whatever way that can help people, he’s down for it.

“It’s definitely something I’d consider, personally I want to pursue a career that enables me to help as many people as I can,” Alcima said. “That way I believe I’d truly be successful. Whether that’s staying on the medical track that I’m on, or tackling international political/ humanitarian issues, either one I’d be content knowing that my work has made someone’s life a lot easier.

A couple of thoughts went through my head when I left the protest.

We hear the older generation call us “kids,” lazy and uncommitted to anything. That’s the stereotype that’s perceived, but seeing the people around my age and younger going out of their way during a pandemic standing for what’s right, it makes me think: These kids are alright.

However, reality needs to hit. The fight isn’t over and it won’t be for a long time. The question is: Are you in it for the long haul?