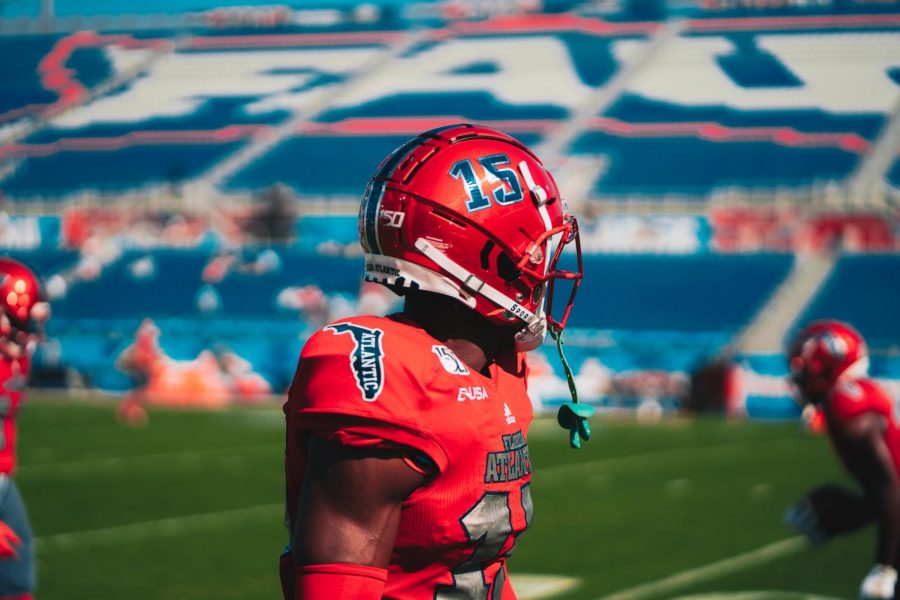 Dotson made an impact in his one season at FAU, recording a program record nine interceptions. Photo by Alex Liscio.

Meiko Dotson has announced that he will be leaving the Owls for Florida State over Twitter Saturday night.

Dotson’s departure is another blow to the FAU football team, as they’ve lost an abundance of top talent to the NFL Draft already.

Dotson had announced that he would be entering the transfer portal on Jan. 15, but his decision to join the Seminoles Saturday confirms that he will not be returning to Boca Raton next year.

According to 247 Sports, Baylor and Boston College were the two other programs that Dotson had mentioned being interested in, but he ultimately decided to choose Florida State.

Dotson had been one of FAU’s best defensive players last season, registering 30 total tackles and an FAU record nine interceptions. He also shared the top spot in the NCAA interceptions leaderboard with San Diego State’s Luq Barcoo. He was also FAU’s lone defensive member of the All-Conference USA team.

2019 was Dotson’s lone season since his arrival at FAU in 2018, as he had a medical redshirt following an injury suffered before the season, but the void he leaves will still be felt by the Owls.

FAU’s cornerback room will look very different in 2020, as Chris Tooley and James Pierre have also departed as graduating seniors.

Replacing Dotson will be a tough task for Willie Taggart, as they lost three members of the unit that led the NCAA in team interceptions last year.

As for Dotson, he will have immediate eligibility upon his arrival at Florida State University.

Colby Guy is a staff writer with the University Press. For information regarding this or other stories, email [email protected] or tweet him @thatguycolbs