The couple, who has their names on various FAU buildings and donated over $5 million to the university, died five days apart from one another. 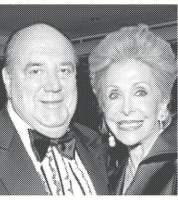 Barry and Carole Kaye are donors to FAU and their names are featured on multiple buildings on campus. Photo courtesy of Legacy.com.

Barry and Carole Kaye, multimillionaire FAU donors, died from COVID-19 over the past two weeks, the Sun Sentinel originally reported Thursday. Their names are placed on the Carole and Barry Kaye Performing Arts Auditorium, Barry Kaye Hall, and the Barry Kaye Program of Risk Management and Insurance in the school of business.

Barry died on April 21 at 91 — and five days later, his wife Carole Kaye died at 87, the Sun Sentinel reported.

According to their obituary, Barry was a former disc jockey who then worked in life insurance and insurance marketing. The obituary reads: “[Barry] always said that, ‘Without [Carole] there would be no Barry Kaye.’”

He also wrote numerous books and received a doctorate from FAU.

Carole also had a successful business in real estate and created the largest contemporary miniature museum to date,  The Carole and Barry Kaye Museum of Miniatures in Los Angeles.

“Carole loved miniatures partly because she could create any world she wanted, just as she created the life that she dreamed of instead of living the small-town life she was born into,” the obituary says.

The couple donated over $5 million to FAU, the Sentinel reported.

The couple were honored in a memorial service via Zoom on April 28 and any donations were requested to go to NY Presbyterian Hospital, Lupus LA, or any other charity.

Marcy Wilder is the web editor for the University Press. For information regarding this or other stories, email [email protected]