Analysis: Harrison Bryant has a lot to work on before he reaches his full NFL potential

With a successful collegiate career at FAU, he’s looking to find a new home in the NFL next week. 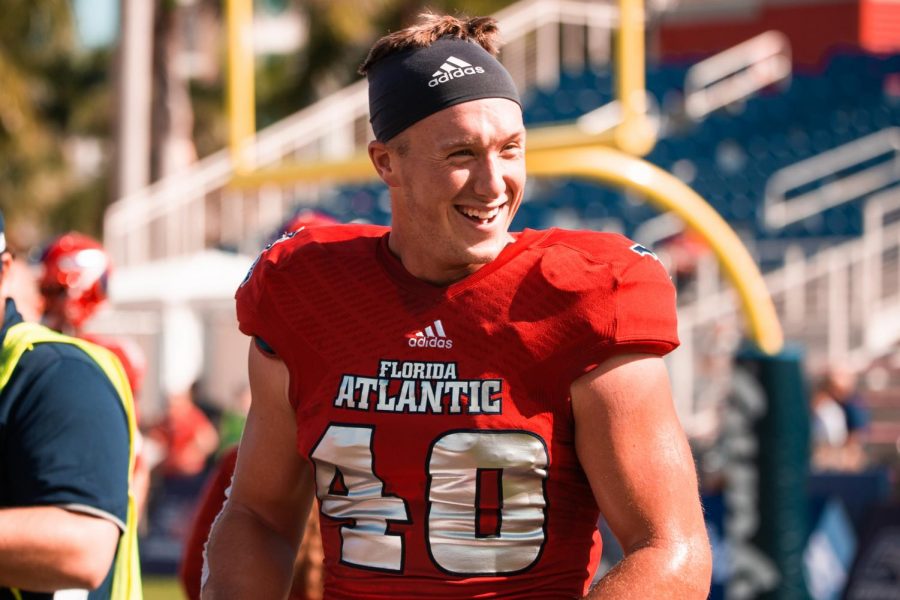 Tight End Harrison Bryant is the first in his position not from a Power 5 conference to win the John Mackey Award. Photo by Alex Liscio.

With the NFL Draft still slated to start on April 23 through a virtual process, FAU football players eligible for the upcoming event await to see if their big league dreams come true.

One of them is star tight end Harrison Bryant. After having a phenomenal senior season with the Owls, where he caught 65 passes for 1004 yards and seven touchdowns, he was awarded the John Mackey Award and was a unanimous All-American.

The question is: Will his success from college translate to the NFL?

The upside is high with Bryant, but it’ll take some time until he reaches the standard of a player like San Francisco 49ers tight end George Kittle, which NFL analyst Lance Zierlein has compared the former Owl to.

Here’s what makes the Georgia native stand out and the abilities he needs to work on to take his play to the next level:

Most of his positives come from the passing game where he was a high-volume receiver. FAU quarterback Chris Robison relied on Bryant a lot to get out of trouble and will prove to be that same target to his future quarterback.

Bryant shows a ton of athleticism and comes out successful on plays through contact. He’s also known for his yards after the catch (YAC) where when he catches the ball, he extends plays in a big way.

He also acted as a matchup nightmare against cornerbacks smaller than him and created separation, and when the play broke down, he improvised to keep it alive.

As a receiving threat, Bryant is going to catch the eyes of NFL scouts in that department but to be the full package at the position, he has some externalities to work out. Though, as he develops and gets comfortable in the league, the outlook is scary.

As of right now, Bryant remains one of the best tight ends in the 2020 draft class and has the highest upside especially on the offensive side of the ball.

To reach the ceiling of being the next George Kittle, Bryant needs to improve in the blocking game.

It’s not like he loses every battle, but to reach his full potential, he needs to become a willing blocker. It’s not surprising that this is a flaw for Bryant, as his lower body power is lacking. But if he bulks up, he could prove wonders in the long run.

However, with the way he performs now, he could struggle against NFL Linebackers and Defensive Ends. It was never a matter of effort for the FAU tight end, in fact, in open space, he’s proven to be successful. Though, when he’s tasked with in-line duties, like people in his position are usually in, the results might not look good at first.

While I’ve been praising his receiving ability, he isn’t without the occasional drop. He dropped eight passes last season and had a 10.4 percent rate, which is one of the worst in the draft class.

With that, I think it’ll take time for Bryant once he gets in the league especially when he has other duties besides being a top target in the passing game.

Based on his high ceiling as a receiver with the inconsistency in the blocking department, it’s unlikely the former Owl goes in the first round. I see the talented tight end going in rounds two through four to a team that needs a boost in that position.

A home in the AFC East is possible but now with the Miami Dolphins or the Buffalo Bills but with the New England Patriots or the New York Jets. Both teams have been looking for their next consistent big target, especially with the Patriots after future hall of famer Rob Gronkowski retired in 2018.

The Green Bay Packers are also on the hunt for a tight end as Jimmy Graham left to their rivals, the Chicago Bears, so giving quarterback Aaron Rodgers a weapon like Bryant adds another layer to that offense.

Jacksonville is also in the market as their tight end room consists of Josh Oliver, James O’Shaughnessy and Charles Jones. While they did sign Tyler Eifert during free agency last month, he’s as injury-prone as it gets and could be a good mentor for Bryant.

Make no mistake: whichever team takes Bryant could get a steal in who can be one of the leagues top tight ends, but it’ll take time.

The University Press will continue its series of draft profiles tomorrow with a focus on defensive back James Pierre.