Analysis: Deangelo Antoine could be a valuable piece on an NFL special teams unit

DeAngelo Antoine has the explosiveness to be an NFL kick returner as an undrafted free agent. 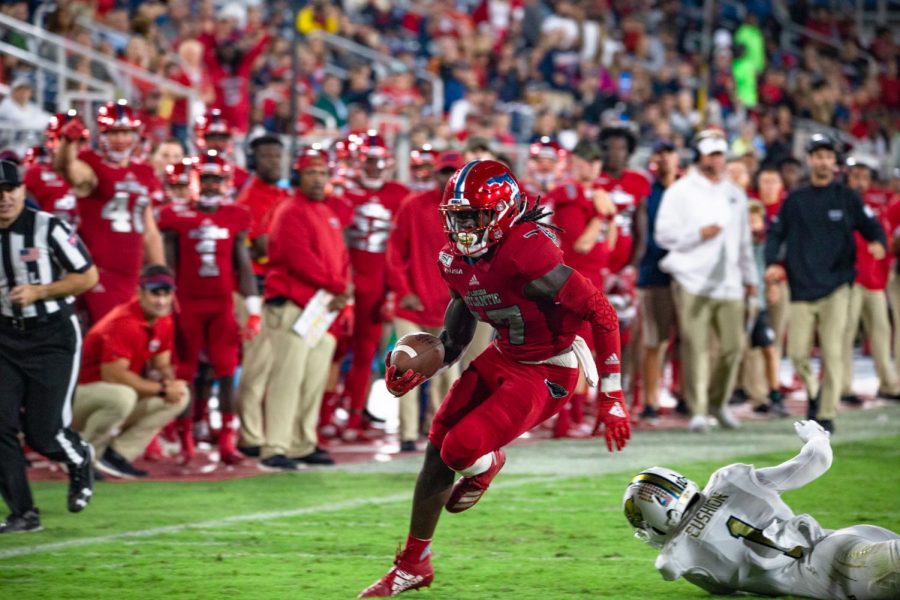 FAU receiver Deangelo Antoine showed his explosiveness all season including a game where he scored four touchdowns, the most in program history. Photo by Alex Liscio.

With the NFL Draft set to begin on April 23, the University Press staff will be looking at some of the draft-eligible players coming out of FAU. We already took a look at Harrison Bryant, James Pierre, Junior Diaz and Rashad Smith. Today, we’ll be looking at wide receiver Deangelo Antoine.

Antoine arrived at FAU in 2019 as a graduate transfer from USF and tore it up, amassing 771 yards and five touchdowns in 13 games as an Owl. He had his biggest game of the season in week two against Wagner, where he racked up 173 yards and four touchdowns on 11 receptions. He became the first wide receiver in FAU history to score four touchdowns, which won him Conference Player of the Week.

As a returner, Antoine put 285 kick return yards on 14 attempts, totaling 20.3 yards per attempt, his longest return being a 38-yard return against Middle Tennessee.

Antoine also had 146 rushing yards on eight attempts along with a touchdown, with his longest being 66 yards.

Here are some pros and cons to Antoine, as observed in his games, and how his NFL career could possibly pan out:

The biggest strength of Antoine’s game is his speed and explosiveness. He is effective off of bubble screens and he can make defenders look foolish with his speed. He is also efficient as both a runner and a receiver and he can make any short-yardage play into a big gain.

His explosiveness is most useful as a returner, as he can turn upfield quickly and burst past defenders, but if used in the right offense, he could be an effective wildcard player who can make big plays out of nothing.

These traits make him versatile, as the Owls have utilized him as both a running back and a wide receiver.

All of Antoine’s accomplishments last season were good enough for him to make it as a C-USA Honorable Mention as both a wide receiver and a kick returner.

One of the biggest cons of Antoine’s game has to be his size, as his 5’10, 188-pound frame is much smaller than that of an average NFL receiver. That makes it harder for him to make big plays and big catches, so that is a major turnoff for NFL teams.

Another flaw from Antoine’s game is his lack of route running ability at the receiver position. Most of Antoine’s value comes from his explosiveness off of screenplays, as he lacks the route running awareness to have true value in that position.

Antoine best projects as a kick returner who can be used as a “gadget player” at the next level, but not much value anywhere else, which is why I see him being an undrafted free agent.

I think if there’s any NFL head coach that can make the most out of DeAngelo Antoine’s value, it’s head coach Sean McVay and the Los Angeles Rams.

With the loss of Todd Gurley, the Rams have to get a bit more creative as far as gaining yards on the ground, and Antoine provides that whether it be as a kick returner or their “gadget player.”

He has explosiveness as a runner, so McVay can draw up some screen plays for him and even use him at the running back position occasionally and it could turn out well for him.

Granted, his true value comes at the kick returner position, but Antoine is a low risk, high reward type of player and McVay is the type of coach that is able to get the most out of his players.

In the Rams offense, I think Antoine has what it takes to not only be a kick returner, but also an effective contributor.

Tomorrow the University Press will be taking a look at defensive lineman Tim Bonner.