After Bernie Sanders suspends presidential campaign, student club ‘Owls for Bernie’ transitions to ‘Owls for All’

The club is now shifting their focus to fighting for progressive causes on and off-campus — even during a pandemic. 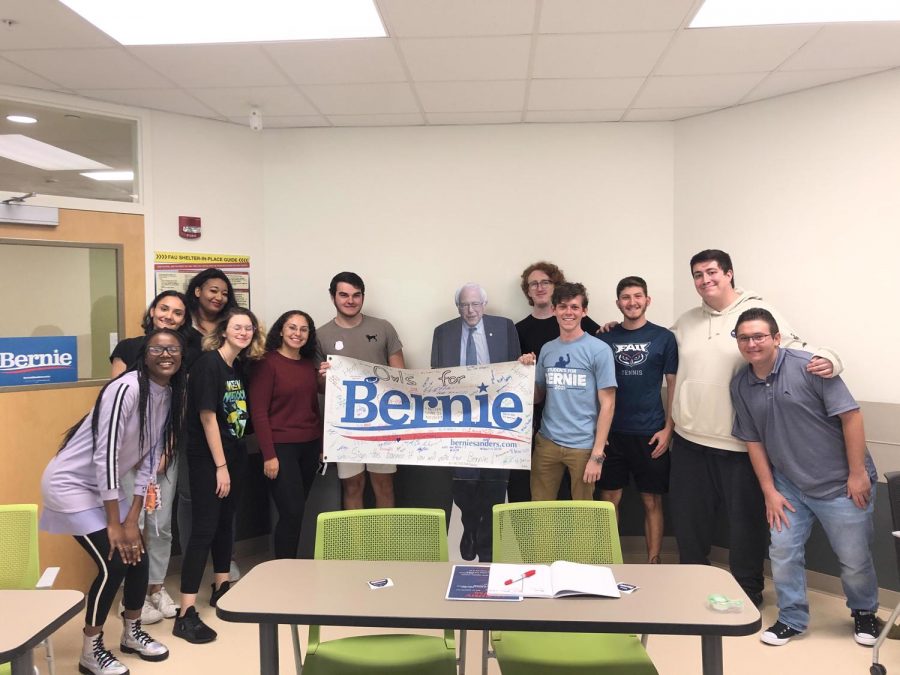 The once "Owls for Bernie" club at FAU will now be called "Owls for All" after presidential candidate Bernie Sanders suspended his campaign. Photo courtesy of Owl Central.

Two days after Democratic presidential candidate Bernie Sanders suspended his campaign, FAU’s Owls for Bernie club rebranded themselves as “Owls for All,” and announced their transition into an “advocacy group for progressive causes on campus,” on their Instagram.

And in an email sent to members the same day Sanders dropped out, the club reminded their members that “the fight doesn’t end with Bernie; in fact, it’s just beginning.”

From their decision not to endorse Joe Biden, their reactions to Bernie’s campaign being suspended, to their plans for the club moving forward, even during a pandemic, members and officers say they will continue fighting for progressive causes on and off campus.

A few days later, the club also announced on Twitter that they’ve “decided overwhelmingly not to endorse Joe Biden,” after a member vote of 33-5.

When it came to the consensus of the club towards not endorsing Biden, President Tyler Radenbaugh noted that his members believe he won’t fight for anything remotely progressive.

“He also has not shown any willingness to compromise with progressives on any policy. He refuses to back Medicare for All, a Green New Deal, or weed legalization, and those are deal breakers for a lot of us,” Radenbaugh said.

“We need a universal healthcare system, and right now, we got millions of people losing their jobs and they don’t have health insurance in the middle of the pandemic. That is not a place that you want to be in as a country,” Radenbough said.

Radenbaugh explained the COVID-19 pandemic is an example of why he supported Bernie’s case for universal healthcare.

“This pandemic exposed the problems of the healthcare system, and it proved the point that Bernie has been trying to make his entire career that we can not rely on this employer-based healthcare system,” Radenbaugh said.

Members’ emotions to the campaign suspension announcement ranged from unsurprised to frustrated.

Radenbaugh said he was not shocked when he heard Sanders dropped out, but he was “kind of angry because it was not the right time for him to do it.”

“The one good thing, though, is that we do have this club, as it turns out that Bernie Sanders is not our golden goose, and we are going to keep fighting,” Rey said, “I would not be politically involved if it were not for Bernie Sanders.”

“He is the future of American politics and students at FAU should get the right to take a part in and be informed about this revolution on their campus,” she said.

Radenbaugh believes the club has gotten a lot of people involved in the political system.

“We got at least 150 people registered to vote. We have over 200 members in the club now, and we were getting in our regular meetings more people than the Democrats club,” Radenbaugh said.

“Our presence provides that home for a generation whose politics are largely dismissed across the mainstream spectrum,” said member Joshua Gold.

And Rey believes that the hardest part is building a community and being part of something that is pushing for something. In terms of bipartisanship, Rey states that it is not right or left.

“It’s the top against the bottom, and that’s where our bipartisanship comes from. We’re the bottom and we’re going to fight the top,” he said.

Member Nicki Cominio said the club is dedicated to spreading progressive ideals and policies throughout local, state, and national government.

“We are the future dedicated to combating for-profit healthcare, the climate crisis, wage and tax inequality, race and gender inequality in all its forms, and standing with our brothers and sisters of the LGBTQ+ community in the face of rampant discrimination,” said Cominio.

While the plans are still in development for how the club will look going forward, Radenbaugh says it is “going to be an advocacy group on campus.” Radenbaugh wants the club to be a place where left-wing people can meet people of all stripes from the left-wing.

Their plans include coalition-building with other left-wing organizations, coalescing around certain Student Government candidates and getting them elected so they can have more representation.