‘Out of control:’ students share their struggles with eating disorders

As Eating Disorder Awareness Week comes to a close, here are two students’ stories with anorexia and binge eating disorder. 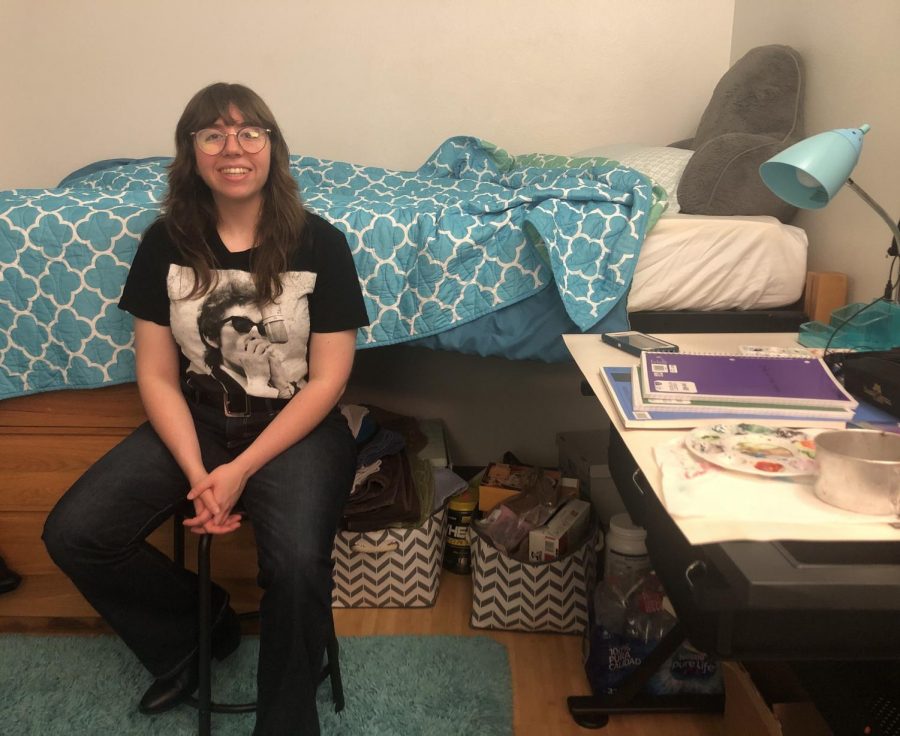 Editor’s note: The Counseling and Psychological Services hotline is 561-297-3540.

Breanna Jomsky didn’t get her period for four years.

From late 2011 to 2015, she lived with anorexia, an eating disorder characterized by “difficulties maintaining an appropriate body weight for height, age, and stature and, in many individuals, distorted body image,” according to the National Eating Disorder Association (NEDA). Because she was exercising too much and eating too little, her body wasn’t able to release an important hormone that’s necessary for periods.

She also bruised easily, slept awfully and cried frequently at the thought of eating food.

Now, the cellular neuroscience major says she’s as “fully recovered as possible.” But there are college students who are still struggling with eating disorders. According to the NEDA’s most recent data, roughly 5 percent of students enter college with an eating disorder.

This week, NEDA celebrated Eating Disorder Awareness Week, where they encouraged people to reflect on “the positive steps you’ve taken — including those stemming from setbacks or challenges — toward accepting yourself and others,” their website says.

While Jomsky dealt with anorexia, another FAU student, environmental engineering major Samuel Gerstein is currently recovering from binge eating disorder, which is characterized by “recurrent episodes of eating large quantities of food often very quickly and to the point of discomfort” and a feeling out-of-control while binging, according to NEDA.

Here are Jomsky’s and Gerstein’s stories with each of their eating disorders:
Living with anorexia nervosa
Around August 2011, when Breanna Jomsky was 13 years old, her parents sent her to an endocrinologist because of her menstrual pains. Jomsky said the “rude” doctor had “zero bedside manner,” and told her she should lose 15 to 20 pounds. After that, she lost 30 pounds in just three months.

“I slowly started eating healthier,” Jomsky said, “but that just went out of control.”

Over the next few years, she ended up visiting five different psychologists. She also saw a nutritionist — but was reluctant to.

Jomsky started out lying to her nutritionist about what and how much she was eating and became “obsessed” with counting calories.

“I’d be in class and have my calculator out and it would be Spanish and I’d be trying to plan things out for the day,” she said. “That was something that took a lot of brain space and energy.”

There are apps that count calories for you now, like MyFitnessPal and Lifesum. But a BBC investigation last year reported that those apps “can exacerbate such behaviors and make recovery harder.”

Jomsky had eventually lost so much weight that when she would sit in the passenger seat of her mom’s Honda, the dashboard would notify her that the airbag in her seat was off. She said she didn’t weigh enough to activate it.

During that time, she would go to the gym and just to cardio. She avoided parties because of the food and cried at the thought of eating a bowl of pasta.

After getting comfortable with her nutritionist, Jomsky began to gain back weight — and she eventually started getting her period again.

“Having an eating disorder is like: you want to get better but you don’t,” Jomsky said. “There’s a lot of cognitive dissonance,” or inconsistent thoughts about your own attitude or behavior.

Now, Jomsky doesn’t just eat the crusts of her turkey sandwiches as a snack anymore — or bruise just from sleeping. She lifts at the gym, paints in her Jupiter dorm and sings covers of rock songs.

She thought that once she gained a certain amount of weight, she would just lose it all again.

“That didn’t happen, luckily,” she said. “I worked too hard to get to where I was and I was starting to feel better about myself and my body and I just didn’t want to go back there.”
Living with binge eating disorder
Samuel Gerstein’s eating disorder started to develop when he was around 13 years old, he said. That’s when he started the ketogenic diet, which is very restrictive in carbs and high in fat.

Even though it was “very extreme,” he said, he lost 60 pounds in a year — and maintained it for longer than that. But he eventually started to stray away from it and started binging on weekends.

“I would eat copious amounts of carbs and sugary food because I was depriving myself of it,” he said. “As school started to get harder, I noticed I would binge and I would literally just shove food down my throat. And it kind of got out of hand.”

He stopped following the ketogenic diet around last September, since Hurricane Dorian hit Florida and the same high-fat foods weren’t going to be available to him. But once he stopped, he said he felt “so much better.”

“Why was I eating that way?” he asked himself after coming off the diet. “I shouldn’t be having this infinite sense of hunger.”

One of the biggest misconceptions he thinks people have about eating disorders is that you have to look a certain way — specifically, he said, it’s not just people who are “skinny” that have eating disorders.

According to NEDA, binge eating disorder is three times more common than anorexia and bulimia combined.

Gerstein also advocated for people who may have eating disorders but don’t yet know it because they can’t afford the means to get help, like low-income families. He argued that structural change needs to be made to allow more people access to nutritious food rather than frozen and canned foods.

“I think …  that we have a very fatphobic culture inside of our health institutions, as well as inside of our inside of our social system,” he said. “And it’s a very degrading system of oppression that we see.”

Kristen Grau is the editor-in-chief of the University Press. For information regarding this or other stories, email [email protected] or tweet her at @_kristengrau.