Opinion: I attended an NYC convention in the middle of a pandemic

An annual college media convention was supposed to be an informative and exciting weekend. Instead, the city was dead and many presenters bailed. 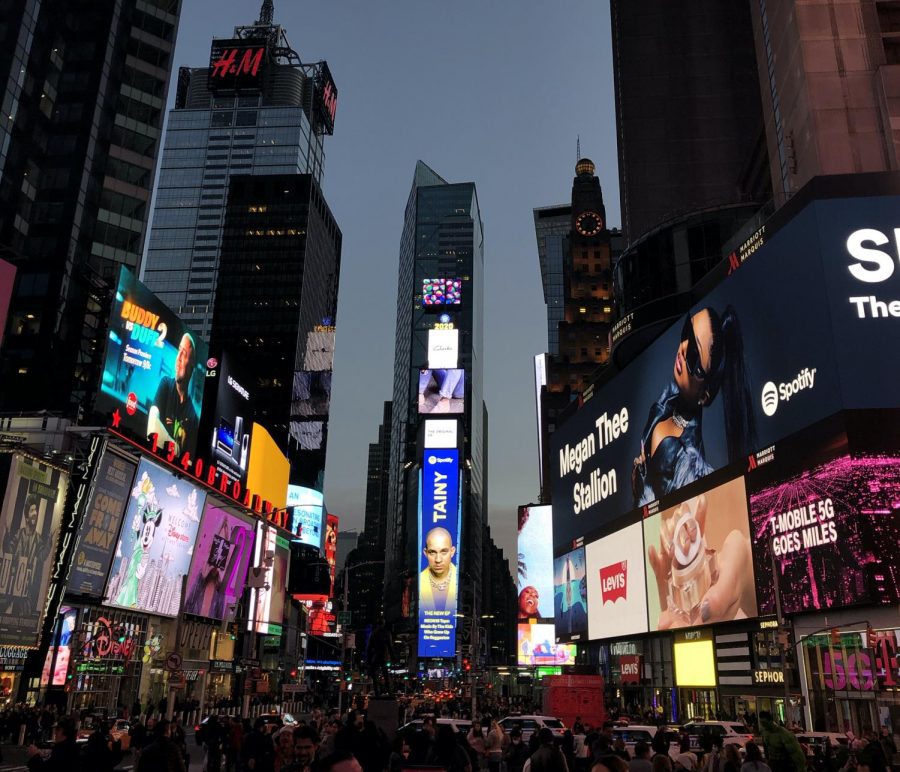 The list of different breakout sessions going on at the 2020 Spring College Media Association convention in New York City stretched a mile long, yet a large majority of them read that one word: canceled. Sessions on Photoshop tips, and social media networking panels all dashed away by one word: canceled.

The day we landed in New York, we learned that over 100 students from universities across the nation had canceled their trip, and many speakers canceled sessions. I wasn’t surprised. The fear of being around large groups of people during the coronavirus made the conference too risky to come for many.

For us, the decision was made in the lobby of the Mariott Marquis that same night.

Student Media members looked around at each other, silently contemplating the choice between returning to Boca Raton to make sure that no one contracted the virus, or staying in New York to attend what few sessions were left. Our director said he’d never seen the hotel so empty around this time of year — a statement that made all of the student’s pause. Everyone looked around at each other, the upbeat music playing in the lobby breaking the few seconds of silence.

We unanimously decided to stay, mainly because in the event the convention was canceled, we thought that at least we would get a free trip to New York. We tried to put the threat of the coronavirus out of our minds and focused on just having a good time. We were in New York City — the thought was that we should have some fun. Broadway was across the street, Times Square was in front of us. We were the 12 brave souls that decided to tough out the virus in one of the states with the highest count of COVID-19. What could possibly go wrong?

The night we decided to stay in New York, a group of friends and I walked around the city looking for some pizza. As we walked along the narrow sidewalks, bundled up to protect us from the cold, I couldn’t help but notice that everyone was oddly calm, considering that a contagious virus could be lurking in the midst of the population.

The pizza parlor was packed, and despite not knowing where the cook’s hands had been, pizzas were flying out the oven. Although we made sure to take proper precautions, we were confident that we would be alright. A couple of hours later, Utah Jazz center Rudy Gobert tested positive for the coronavirus, and the NBA canceled the season.

If you were to imagine what a ghost town looked like, I’m sure it would fit the surroundings on Day One of the convention. The tables that were supposed to house newspapers and magazines were empty. Behind the counter where students, advisers, and guest speakers were able to take their badges, packets and packets of unopened badges littered the counter.

I went down to the shop in the hotel lobby to buy some hand sanitizer, as the convention ran out of hand sanitizer to give to people. The cashier looked at me, bags under his eyes from what I assumed to be days of answering that same question I had. He simply replied, “We don’t have any.”

Among the attendees that decided to remain, the morale remained optimistic. People were making jokes and shaking hands-something that the World Health Organization warned against during this time. I was surprised at this insistence on contact, even when we were advised to avoid that.  Every time someone would cough or sneeze, all eyes would travel to them. The mood among us students changed, however, when we learned that the NCAA canceled most of their conference tournaments, and New York declared a state of emergency.

Fears of being stuck in New York City began to rise among us, and sessions became secondary to everyone’s safety. As I sat in a conference room learning about how to be an editor-in-chief later that day, another notification popped up on my phone: the last day of the convention had been canceled.

As I walked around Times Square, the threat of the virus in the back of my mind, I found myself noticing all of the small things that could spread the virus. Going up the escalator in the Disney Store, and walking up the stairs to Midtown comics, multiple hands were on the railings, hands that have touched people and places I didn’t know.

I took my hands off the railings and looked around for hand sanitizer. Going back down the same way, I did the exact same thing. It got to a point where the most fun we had was playing card games like Reverse B.S. and UNO in the hotel room, choosing not to go outside.

After being in the middle of it all, walking among the New Yorkers with surgical masks and gloves on, having hand sanitizer ready at any moment, and staying glued to the TV waiting on the latest news in a state that’s declared an emergency, I urge you to stay home.